Auteur of the Week: David Fincher

David Fincher is one of my favorite directors. He is so insanely meticulous with his films. I think he’s created several of the most memorable films of the last twenty years. His latest film, The Social Network, looks to be nothing short of fabulous and I can’t wait to see it this weekend. 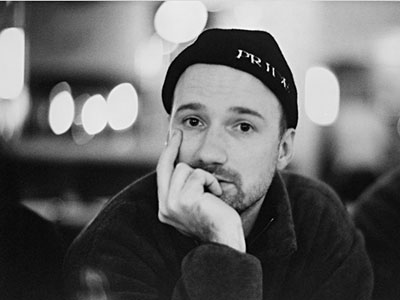 Fincher was born on August 28, 1962 in Denver, Colorado. His family moved to San Anselmo, California when he was young and later to Ashland,Oregon in his teens, where he graduated from Ashland High School. Inspired by Butch Cassidy and the Sundance Kid, Fincher began making movies at age eight with an 8 mm camera. Instead of going to film school, he got a job loading cameras and doing other hands-on work for John Korty’s Korty Films. He then went to work with Industrial Light & Magic in 1980. In 1984 he directed a commercial for the American Cancer Society, that showed a fetus smoking a cigarette. He then joined video-production company Propaganda Films and started off directing music videos and commercials before landing his first feature length film. 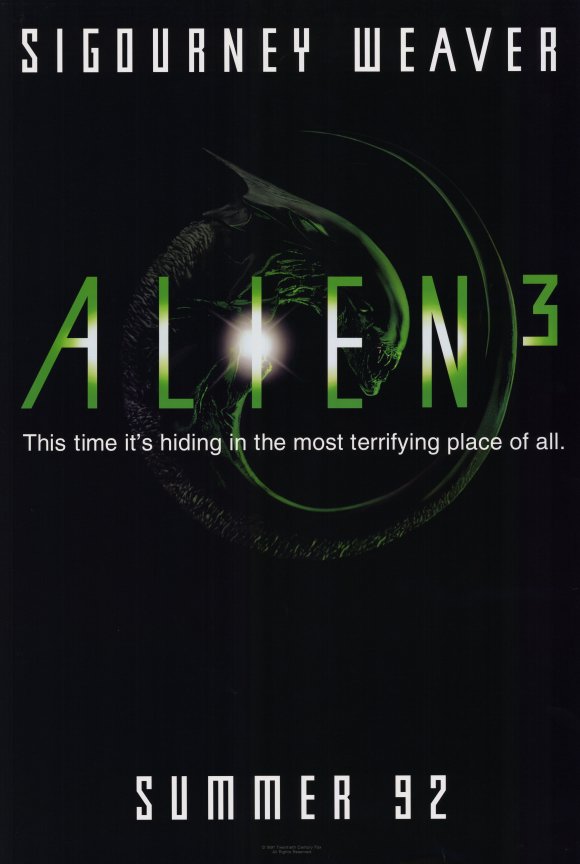 At the age of 30 Fincher was brought in late in the game to direct Alien 3 – the sequel to Alien directed by Ridley Scott and Aliens by James Cameron. The film suffered from several re-writes and Fincher had to begin production without a definite script. He also found it difficult to endure incessant creative interference from the studio. The film was almost universally panned by critics and holds a 34% “rotten” rating on Rotten Tomatoes. It was a box office success, however, making $159,773,545 on a $50 mil budget. I don’t remember much about this film other than really hating the beginning. I’m sure it’s a film Fincher would rather forget about, considering the strides he’s made in the 18 years since its release. 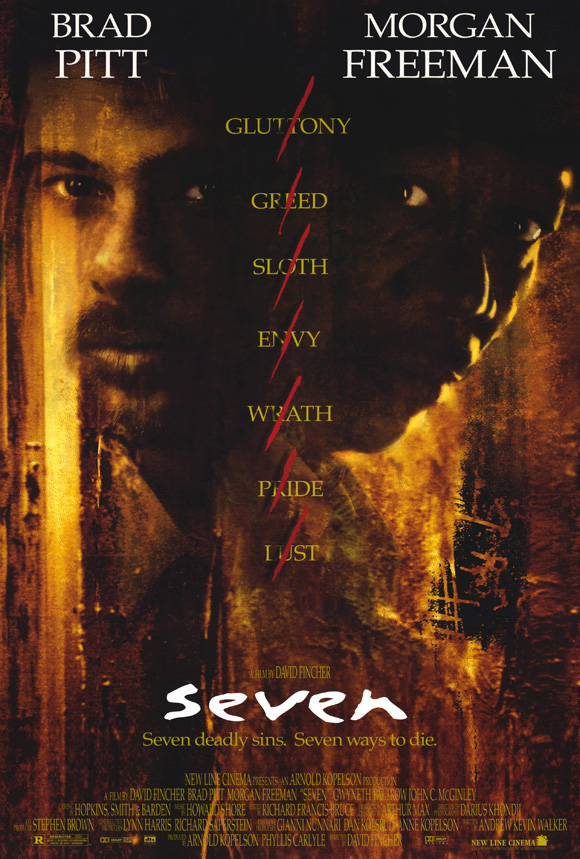 Se7en is probably the film Fincher wishes were his debut. It is such a fabulous film and from it you can really see how Fincher got where he did with his other films. It currently holds an 84% “fresh” rating on Rotten Tomatoes and is #28 on IMDb’s Top 250. Richard Francis-Bruce received an Oscar nomination for his work editing the film. It was made on a $30 mil budget and grossed $327,311,859 worldwide – the seventh highest grossing film of 1995. I really love this film. It is so perfectly stylized and it’s one I hope you all stay for the credits while watching, because even the credits are amazing. I love the cast – Brad Pitt, Gwyneth Paltrow, Morgan Freeman and Kevin Spacey are all on the top of their games in this film. This is probably my second favorite of Fincher’s films. 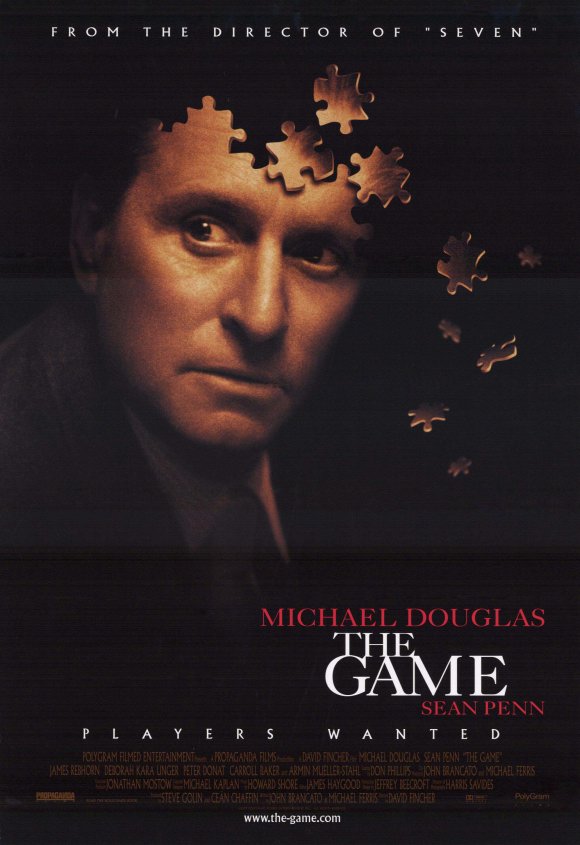 His next film was the 1997 Michael Douglas/Sean Penn thriller The Game. It was well received by critics and holds a 79% “fresh” rating on Rotten Tomatoes. It managed to double its $50 mil budget at the box office. I loved this film when I first saw. I think it’s one of Michael Douglas’ best performances. Sadly, though I think it has been largely forgotten since its release 13 years ago. I think it’s long running time – 135 minutes – has hurt it being played on television and if films are shown regularly on television these days people forget the ever existed. If you’ve never seen this film and are a fan of Fincher’s other work, I highly recommend you rent it, you won’t be disappointed. 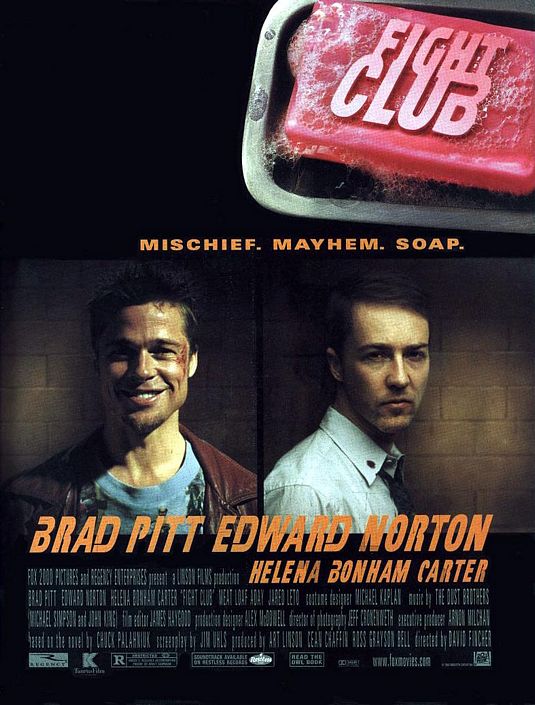 Arguably Fincher’s most well know film, Fight Club was sort of a love-it-or-hate-it type film when it first premiered, although it does have an 81% “fresh” rating on Rotten Tomatoes. It’s also considered a modern cult classic and currently resides at the #18 spot on IMDb’s Top 250. It was made on a $60 mil budget and made $100,853,753 worldwide. It was also nominated for Best Sound Editing at the Academy  Awards. I remember seeing this film for the first time when I was in high school, I think I was on an Edward Norton kick, and being completely blown away and conned my brother into buying it for me for my birthday. Sadly, when I moved away from San Francisco my copy of this DVD did not come with me. It’s out there somewhere enjoying the life I wish I led, I’m sure. I need to replace it, but soon. This film contains one of my all-time favorite fights, as well as numerous quotable lines. It’s definitely one of Brad Pitt’s best performances and one of Helena Bonham Carter’s most memorable. 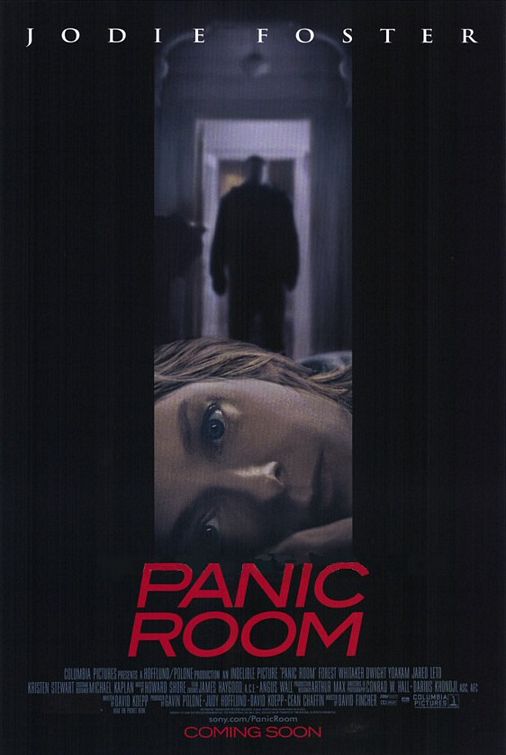 His next film was 2002’s Panic Room, starring Jodie Foster and pre-Twilight fame Kristen Stewart. Originally Nicole Kidman was slated to play the Foster role, but due to injuries she received while filming Moulin Rouge! she had to bow out. As much as I like Kidman, especially back then when she was at her peak, I don’t think she could have done this part. Fincher even said, “Nicole Kidman makes you make a different movie. It’s like Hitchcock casting Grace Kelly. It’s about glamour and physicality. With Jodie Foster it’s more about what happens in her eyes. It’s more political. Jodie is someone who has spent 35 years making choices that define her as a woman and define women in film. Jodie Foster is nobody’s fucking pet, nobody’s trophy wife.” Foster made the film a lot harder, edgier and I’m glad that she did. The film currently holds a 76% “fresh” rating on Rotten Tomatoes. It was made on a $48 mil budget and made $196,397,415 worldwide. This film is definitely one of my favorite thrillers. I remember going to see it in theaters and practically biting my fingers to the nubs out of nervousness.

I think Zodiac is Fincher’s masterpiece. It is so perfectly crafted. I’ve actually read both books on which the film was based and it boggles my mind how effortless it seems he brought this story to life. Not only is this my favorite of Fincher’s films, it’s also one of my All-Time Favorite films. It was made on a $64 mil budget and made $84,785,914 worldwide. The film holds an 89% “fresh” rating on Rotten Tomatoes and was featured on 25 Top Ten lists for 2007. I really wish this film had been released later in the year, it was released in March – when you release your throw-away films – and by the time awards season was in full swing the critics remembered the film but the Academy ignored it completely. I could go on for days about how pissed off I am that this brilliant film was so snubbed, and have several times already on this site, but it still bugs me so much. I will admit I didn’t see it in theaters – mostly because it was a March release and I don’t tend to see many films that early in the year because usually they’re all crap. I guess all the rave reviews just slipped past my radar. I did, however, rent it as soon as it was on DVD and continued to kick myself in the head for having not seen it in theaters.

My anger over Zodiac getting so snubbed the year earlier was fueled even more when Fincher’s 2008 film The Curious Case of Benjamin Button wound up getting so much praise. I mean, I enjoy this film, but it is not even in the same league as the previous film. It is nowhere near as concise and perfect as his 2007 film and because it was his first film to garner a lot of Academy respect, it’s the film people tend to think about when Fincher is mentioned and that just makes my blood boil. That’s not to say I didn’t enjoy this film. I even like this film. But I think it felt long and labored in a way that none of his previous films did. The film was made on a $150 mil budget and made $333,932,083 worldwide. It currently holds a 72% “fresh” rating on Rotten Tomatoes. It was on 12 Top Ten list, and was nominated for numerous awards. Among those awards, it was nominated for 13 Academy Awards, winning three: Best Art Design (won), Best Makeup (won), Best Visual Effects (w0n), Best Cinematography, Best Costume Design, Best Editing, Best Score, Best Sound, Best Adapted Screenplay, Best Actor Brad Pitt, Best Supporting Actress Taraji P. Henson, Best Director and Best Picture. 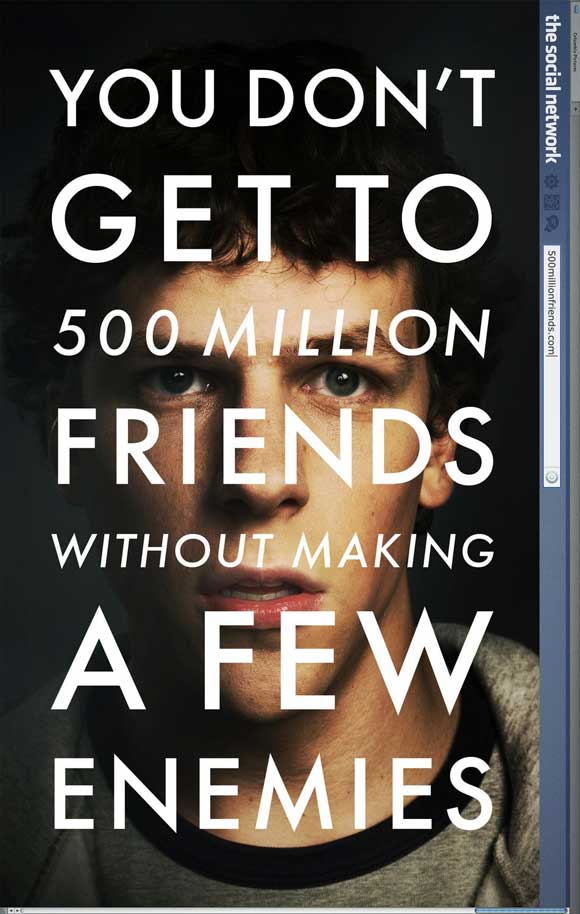 His latest film, penned by Aaron Sorkin, The Social Network premiered at the New York Film Festival and currently holds a 100% “fresh” rating based on 40 reviews on Rotten Tomatoes. This has been my most anticipated film all year. All I needed to know was Fincher + Sorkin + Jesse Eisenberg and I was sold. The film opens on October 1st – this Friday – and is already the frontrunner for Best Picture. Eisenberg is also being heralded for his performance and his name is being thrown around as a contender for Best Actor. It’s all music to my ears. I am most definitely seeing this film on Friday and I cannot wait. I sort of hate going into film with high expectations, but every other 2010 release this year that’s had huge critical acclaim prior to its release hasn’t let me down, so I’ve got my fingers crossed that this one won’t either.

Fincher’s next slated project is an adaptation of the Swedish novel The Girl With The Dragon Tattoo (a swedish version was released, to much critical acclaim, in 2009). The film is set to star Rooney Mara, who is also in The Social Network, and Daniel Craig and already has a release date set for December 21, 2011.

If you’re interested in buying any of David Fincher’s films, you can do so here.

Posted on September 28, 2010, in Auteur of the Week and tagged Alien 3, Auteur of the Week, David Fincher, Fight Club, Panic Room, Se7en, The Curious Case of Benjamin Button, The Game, The Girl With The Dragon Tattoo, The Social Network, Zodiac. Bookmark the permalink. 2 Comments.