I’ve waited a long time (nearly a year!) to write about 1939 as it is widely regarded as the “greatest year in Hollywood history.” I’d also not seen all ten of the nominated films into just recently (thank you very much, TCM and your 31 Days of Oscar!). So after having watched this films it came down to picking one to write about. This was also difficult because Gone With The Wind (the winner that year) is my second favorite film of all time. So this is definitely not an “Oscar got it wrong” post, but instead I decided to go with one of the least talked about films from the year. This has got to be the best adaptation of Steinbeck’s heartbreaking novel of the same name. Everything about the film is pitch-perfect. The film was nominated for four Oscars, but failed to win a single award: Best Sound Recording, Best Original Score, Best Scoring and Best Picture. The other nominees that year were Dark Victory, Goodbye, Mr. Chips, Love Affair, Mr. Smith Goes To Washington, Ninotchka, Stagecoach, The Wizard of Oz, Wuthering Heights and winner Gone With The Wind.

What really hit me was how straightforward this film was. It wasn’t overly sentimental, as films from this era sometimes are. It just presented its protagonists exactly as we see them in the book. Lennie and George’s relationship doesn’t feel forced at all; it’s more organic than many a road movie buddy picture. The men at the ranch are hard, downtrodden men, but they feel real, not like a pastiche. Aaron Copland’s score sets the tone perfectly, again, without being overly melodramatic. Lewis Milestone brings the same exquisite, light touch that he brought to All Quite On The Western Front in 1930. By that I mean that both films are filled with heavily dramatic themes, but they Milestone’s direction in the two films never once feels heavy-handed.

This film is credited with introducing its two main stars to larger audience. Burgess Meredith is perfectly cast as George; he is equal parts tough-as-nails and equal parts a most compassionate friend. Meredith’s George loves Lennie as a brother, realizing early on that he was different and would need someone to look out for him. He does his best to keep Lennie out of trouble, but as the story goes, we know he cannot be fully successful. He isn’t a perfect man, though, by any means. There are times when you can see in George’s eyes how he realizes how much easier life would be without his friend; but he’ll never abandon him. Lennie is his albatross and he will wear him around his neck until the bitter end. Although Meredith was not nominated for his role in this film, he would later receive two back-to-back Best Supporting Actor nominations in the 70s (for 1975’s The Day of the Locust and 1976’s Rocky).

I was never a big Lon Chaney, Jr. fan (although his father, Lon Chaney Sr. is one of my favorite actors of the silent era), though prior to seeing this film I think the only films I’d seen him in were 1941’s The Wolf Man and 1958’s The Defiant Ones. After watching this film, however, I became at once and irrevocably a fan. Lennie is a hard character to play. It’s easy to play the character way over the top and melodramatically. Chaney, however, gives one of the most subtle and honest performances I’ve ever seen. It actually reminded me a lot of Cliff Roberston in 1968’s Charly. Roberston won an Oscar for playing the mentally challenged Charly who befriends a mouse named Algernon and undergoes controversial medical experiments. Chaney, however, did not. In fact, Chaney was never nominated for an Academy Award during his entire forty-year career. While I haven’t seen enough of his filmography to know if he deserved a nomination for any of his other performances, I definitely feel he should have received one for his performance in this film. 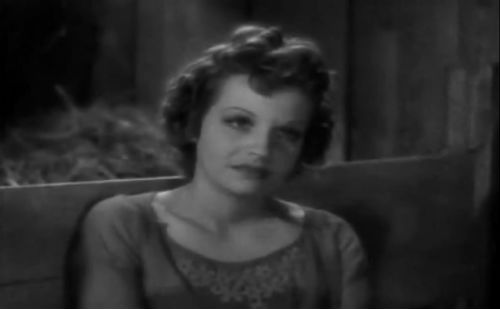 Betty Field is marvelous as Mae, the unhappy wife of Curley, the son of the owner of the ranch. This character requires equal parts innocence and fierce sexuality, both of which Field manages to exude with perfect ease. Another character that could have been played way over the top, Field manages to make the audience empathize with her character’s plight. If you’re interested in seeing more of what Field can do, I highly recommend you see 1962’s Birdman of Alcatraz, where Field co-stars with Burt Lancaster and Thelma Ritter.

I love the scene between Chaney’s Lennie and Field’s Mae towards the end of the film. The two are such kindred spirits, dreamers living in a hard world. If you’ve read the book, you know how the scene is going to play out and that just adds to the heartbreak at the scene’s denouement.

The very end of the film is probably one of the most harrowing ends to a film I’ve ever seen. I’d read the book and seen a few other film versions of this story, but I was still not prepared for the emotions this scene dragged out of me. It’s filled with such compassion and utter heartbreak and it’s so tastefully filmed; it’s just the perfect amount of devastation.