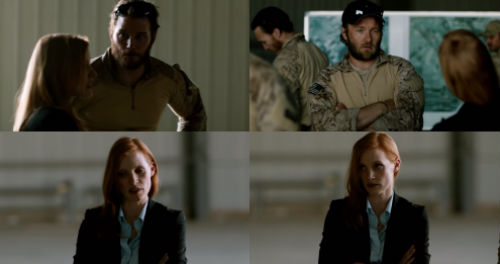 Justin: Okay, so how do you know it’s bin Laden? ‘Cause the truth is, we’ve been on this op before. It was ’07, and it wasn’t bin Laden, and we lost a couple of guys.
Maya: Totally understand. Bin Laden uses a courier, to interact with the outside world. By locating the courier, we’ve located bin Laden.
Patrick: That’s really the intel. That’s it?
Maya: Quite frankly, I didn’t even want to use you guys, with your dip and velcro and all your gear bullshit. I wanted to drop a bomb. But people didn’t believe in this lead enough to drop a bomb. So they’re using you guys as canaries. And, in theory, if bin Laden isn’t there, you can sneak away and no one will be the wiser. But bin Laden is there. And you’re going to kill him for me.