I first saw this film as a midnight movie my sophomore year at Berkeley. It scared the crap out of me. Walking home in the dark afterwards I was scared to death, even though I’d gone to a lot of midnight movies that semester and walked home each and every time. I think I was scared because the haunting atmosphere of A Clockwork Orange was still with me. When a movie can affect my immediate perception of the world around me, I know I’ve seen something quite brilliant. The film was nominated for four Academy Awards – Best Film Editing, Best Director, Best Adapted Screenplay and Best Picture. Three of the four of those nominations were for Kubrick as he wrote, directed and was sole producer of the film. It did not win a single award. It was up against Fiddle On The Roof, Nicholas and Alexander, The Last Picture Show and winner The French Connection. Confession: other than that one great car chase, The French Connection bored me to death.

Stanley Kubrick in his entire career was nominated for 13 Oscars, including four times as Best Director, and the only award he ever won was Best Visual Effects for 1969’s 2001: A Space Odyssey. Regardless, he will always go down in history as one of the greatest directors of all-time and A Clockwork Orange will always be regarded as one of his greatest films. 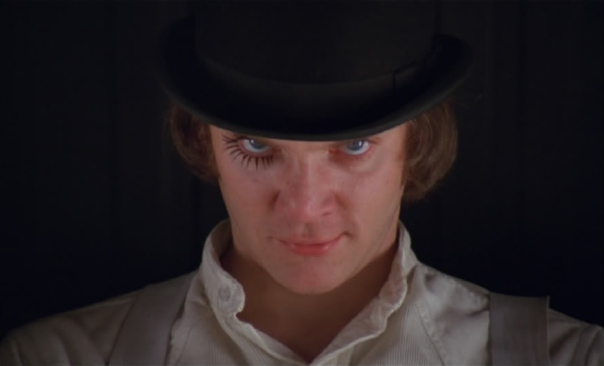 This film served as an introduction for British actor Malcolm McDowell. Not only did his performance as the film’s protagonist (antagonist?) Alex DeLarge blow away audiences and critics alike, he created one of cinema’s most enduring and iconic characters. The American Film Institute called the character the 12th greatest villain of all time. He is probably one of the more likable and charming psychopaths ever to grace the silver screen. 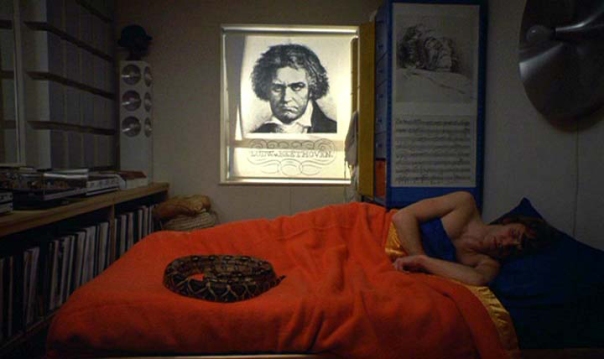 One of the things I really love about this film is the juxtaposition of violence and things of beauty. A great example of this is all the classical music that is heard throughout the film. There’s even a poster of Beethoven hanging up in Alex’s bedroom. Apparently the film re-invigorated record sales of Beethoven’s “Ninth Symphony.” It’s just such a wonderful contrast between the punk attitudes of the main characters and the stuffy reputation of classical music in modern society. 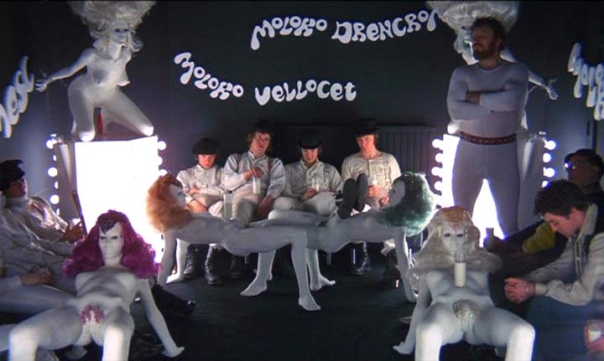 This crazy kind of juxtaposition comes up again when the Alex and his friends go to the Korova Milk Bar, a bar where milk is served mixed with various drugs. Firstly, we get milk, which is generally thought to be such an innocent drink. Babies drink milk! Then we get the decor of the bar – very naked women. There’s so much white – a color often used to signify innocence – in the scene. We know the boys have just finished an evening of “the old ultra-violence” and then we get this scene. I think it’s these grand juxtapositions that add to the eerie atmosphere of the whole film, an atmosphere that stays with you long after you’ve finished the film.

I wanted to add a screencap from the car scene because it’s such a crazy scene. They’re all practically falling out of the car, while McDowell’s Alex drives like a maniac. I love the intense urgency on McDowell’s face during this scene.

Which brings us to arguably the most famous scene from the film, in which Alex and his gang invade the home of a married couple, assault the husband and violently rape the wife – all while Alex sings Singing In The Rain. Apparently they worked on this scene for four days while Kubrick tried to get the right feel for it. Eventually he asked McDowell if he could dance, the result being the bone-chilling rendition of Singing In The Rain – the only song McDowell could remember. Kubrick liked it so much he immediately went out and bought the rights to the song – at the cost of $10,000. This fits in perfectly with the earlier juxtaposition of the innocence of milk and the violence of the gang. Here we have hyper-violence contrasted with a song and dance number for one of Hollywood’s most beloved musicals. It is this very hyper-violence that marks this film as part of the beginning of the change in Hollywood’s control of violence in film. Also, apparently, Kubrick had the film withdrawn for release in Britain, partially due to violent copy-cat behavior and partially due to threats he and his family received. In fact, it was near impossible to see this film in Britain until after his death nearly 27 years later.

Lastly I want to talk about the Ludovico technique scene. This is a really difficult scene to watch, and apparently was a really difficult scene to film. Malcolm McDowell scratched a cornea and was temporarily blinded while filming. The book’s author Anthony Burgess was not a fan of behavioral psychological, and the Ludovico technique was meant as a parody of aversion therapy. In the film, Alex is forced to watch horribly graphic rapes, assaults and other acts of violence while under the influence of drugs that make him feel as though he were having a near-death experience. The theory, in the film, is that afterwards he will feel ill the next time he tries to perform and/or watches such an act of violence. I don’t want to spoil the ending too much, but let’s just say it’s delightfully surreptitious.