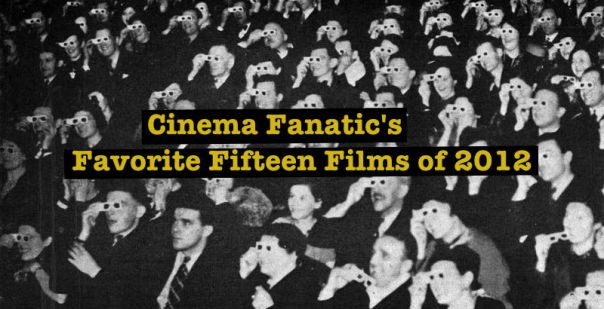 END_OF_DOCUMENT_TOKEN_TO_BE_REPLACED

When this movie first came out I was dying to see it, but sadly my hometown theater didn’t get it and I had to wait for it to be a rental. I rented a shitty full frame VHS from my local rental store and I fell in love with it. Luckily, a week or so later we went out-of-town and I bought the special edition DVD and I watched it right away in all its widescreen glory. Let me tell you, I already felt pretty strongly about aspect ratios, but that little experience cinched it for me. The full frame ruined soooo much of Luhrmann’s amazing framing and ruined some of the film’s reoccurring themes. I finally got to see the film on the big screen when I was in college and boy what an experience that was! I also got to see it at the Castro Theatre last summer and boy who giant screen really brings out the power of the imagery and emotions of the film. After I saw this film the first time, I went back to my local rental store and rented absolutely every film starring either Nicole Kidman or Ewan McGregor that they had (which was actually quite a lot of films). That was a lot of fun. Moulin Rouge! was nominated for eight Oscars, winning two: Academy Award Best Art Direction (won), Best Costume Design, Best Makeup, Best Sound, Best Cinematography, Best Film Editing, Best Actress Nicole Kidman and Best Picture. Luhrmann didn’t receive a nomination for Best Director and Oscar host Whoppi Goldberg famously quipped when presenting the film that “apparently it didn’t have a director.” This was a year where two of the Best Picture films didn’t get Best Director nods (the other was Todd Field for In The Bedroom) and two directors whose films weren’t nom’d did: David Lynch for Mulholland Drive and Ridley Scott for Black Hawk Down. Always strange when that happens, though I am 100% behind Lynch’s nomination.

END_OF_DOCUMENT_TOKEN_TO_BE_REPLACED

Georges Méliès: My life has taught me one lesson, Hugo, and not the one I thought it would. Happy endings only happen in the movies. 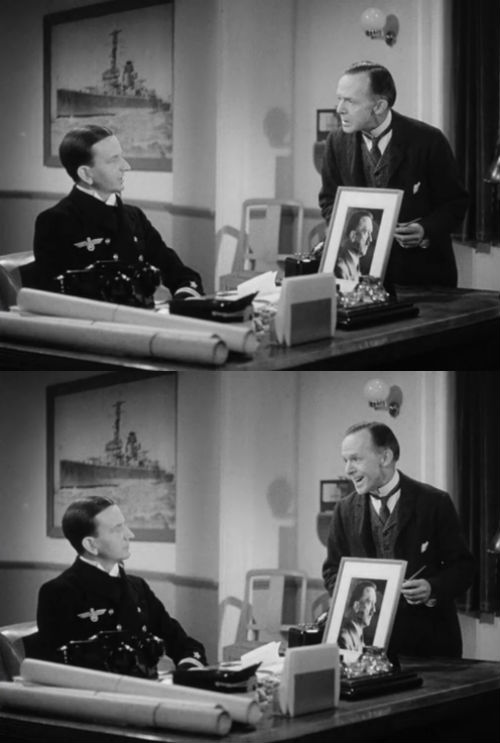 Kampenfeldt: It’s been reported to me that you’ve been heard expressing sentiments hostile to the fatherland!
Schwab: What – me, sir?
Kampenfeldt: I warn you, Schwab, this treasonable conduct will lead you to a concentration camp.
Schwab: But, sir, what did I say?
Kampenfeldt: You were distinctly heard to remark, “This is a fine country to live in.”
Schwab: Oh no, sir. There’s some mistake. What I said was, “This is a FINE country to live in!”
Kampenfeldt: Uh? You sure?
Schwab: Yes, sir.
Kampenfeldt: Huh. I see. Well in future don’t make remarks that can be taken two ways. Much wiser not to talk politics at all.

Vincent: I don’t know how to thank you.
Jerome: No, No. I got the better end of the deal. I only lent you my body. You lent me your dream.

Movie Quote of the Day – All Quiet on the Western Front, 1930 (dir. Lewis Milestone)

Professor Kantorek: And as if to prove all I have said, here is one of the first to go! A lad who sat before me on these very benches, who gave up all to serve in the first year of the war. One of the iron youth who have made Germany invincible in the field! Look at him. Sturdy and bronze and clear-eyed! The kind of soldier every one of you should envy! Paul, lad, you must speak to them. You must tell them what it means to serve your fatherland.
Paul Bäumer: No, no, I can’t tell them anything.
Professor Kantorek: You must, Paul. Just a word. Just tell them how much they’re needed out there. Tell them why you went, and what it meant to you.
Paul Bäumer: I can’t say anything.
Professor Kantorek: If you remember some deed of heroism, some touch of humility, tell about it.
Paul Bäumer: I can’t tell you anything you don’t know. We live in the trenches out there, we fight, we try not to be killed; and sometimes we are. That’s all.
Professor Kantorek: No, no Paul!
Paul Bäumer: I’ve been there! I know what it’s like!
Professor Kantorek: That’s not what one dwells on, Paul!
Paul Bäumer: I heard you in here, reciting that same old stuff. Making more iron men, more young heroes. You still think it’s beautiful and sweet to die for your country, don’t you? We used to think you knew. The first bombardment taught us better. It’s dirty and painful to die for your country. When it comes to dying for your country it’s better not to die at all! There are millions out there dying for their countries, and what good is it?
Professor Kantorek: Paul!
Paul Bäumer: You asked me to tell them how much they’re needed out there. He tells you, “Go out and die!” Oh, but if you’ll pardon me, it’s easier to say go out and die than it is to do it!
Student: Coward!
Paul Bäumer: And it’s easier to say it, than to watch it happen!
Students: Coward! You’re a coward! Coward!
Professor Kantorek: No! No, boys, boys! I’m sorry, Baumer, but I must say. . .
Paul Bäumer: We’ve no use talking like this. You won’t know what I mean. Only, it’s been a long while since we enlisted out of this classroom. So long, I thought maybe the whole world had learned by this time. Only now they’re sending babies, and they won’t last a week! I shouldn’t have come on leave. Up at the front you’re alive or you’re dead and that’s all. You can’t fool anybody about that very long. And up there we know we’re lost and done for whether we’re dead or alive. Three years we’ve had of it, four years! And every day a year, and every night a century! And our bodies are earth, and our thoughts are clay, and we sleep and eat with death! And we’re done for because you can’t live that way and keep anything inside you! I shouldn’t have come on leave. I’ll go back tomorrow. I’ve got four days more, but I can’t stand it here! I’ll go back tomorrow! I’m sorry.

Tom Brown: What in the name of 10,000 corporals did you come to a country like this for anyways?
Amy Jolly: I understand that men are never asked why they entered the Foreign Legion. . .
Tom Brown: That’s right. They never asked me and if they had I wouldn’t have told. When I crashed the Legion, I ditched the past.
Amy Jolly: There’s a foreign legion of women, too. But we have no uniforms, no flags, and no medals when we are brave; no wound stripes when we are hurt.
Tom Brown: Look here, is there anything I can do to help you?
Amy Jolly: No. I’ve thought that before. Or, do you think you can restore my faith in men?
Tom Brown: Not me. You got the wrong man for that! Anybody who has faith in me is a sucker.
Amy Jolly: You better go now. . .I am beginning to like you.
Tom Brown: I’ve told women about everything a man can say. I’m going to tell you something I’ve never told a woman before: I wish I’d met you ten years ago. 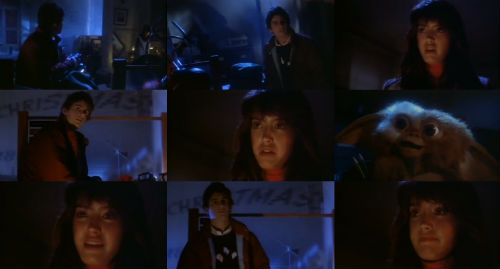 Kate: Now I have another reason to hate Christmas.
Billy Peltzer: What are you talking about?
Kate: The worst thing that ever happened to me was on Christmas. Oh, God. It was so horrible. It was Christmas Eve. I was 9 years old. Me and Mom were decorating the tree, waiting for Dad to come home from work. A couple hours went by. Dad wasn’t home. So Mom called the office. No answer. Christmas Day came and went, and still nothing. So the police began a search. Four or five days went by. Neither one of us could eat or sleep. Everything was falling apart. It was snowing outside. The house was freezing, so I went to try to light up the fire. That’s when I noticed the smell. The firemen came and broke through the chimney top. And me and Mom were expecting them to pull out a dead cat or a bird. And instead they pulled out my father. He was dressed in a Santa Claus suit. He’d been climbing down the chimney… his arms loaded with presents. He was gonna surprise us. He slipped and broke his neck. He died instantly. And that’s how I found out there was no Santa Claus.

Movie Quote of the Day – The Nightmare Before Christmas, 1993 (dir. Henry Selick)