Auteur of the Week: Sofia Coppola

My first experience with Sofia Coppola was when I was about 15 or 16 I think, when I rented The Virgin Suicides. When the film was first in theaters I was really into Josh Hartnett, and I remember being on the 8th grade trip to the Hilton in Reno and seeing that it was playing at the casino’s theater, but because the film was rated R and I was only 13 at the time I couldn’t go see it. Then I forgot about the film for a few years before renting it. I remember thinking it was one of the darkest films I’d seen at that point and also one of the films with the strongest point-of-view from its director. Since then I’ve kind of had a love/hate relationship with Coppola. Regardless, she has maintained her strong point-of-view in all of her films. I’ve yet to see her most recent film, Somewhere, but it has received wide-critical praise so far, including winning the Golden Lion at the Venice Film Festival over the weekend, becoming the first American woman to win it. 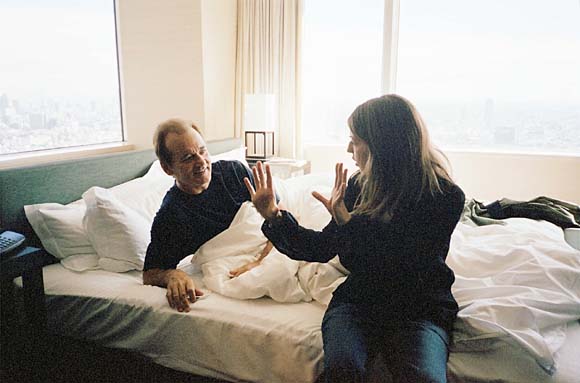 Sofia Coppola was born in New York City, the youngest child and only daughter of acclaimed director Francis Ford Coppola with his wife Eleanor. She attended Mills College and the California Institute of the Arts, as well as interned with Chanel when she was fifteen years old. After graduating, Coppola started a clothing line called Milkfed that is sold exclusively in Japan. She has acted in a handful of her father’s films, including a really terrible performance in The Godfather: Part III, as well as the Tim Burton short film Frankenweenie. Coppola was married to director Spike Jonze from 1999 until their divorce in 2003. Sofia Coppola currently lives in Paris with her partner Thomas Mars, lead singer of the French rock band Phoenix, and their two children. 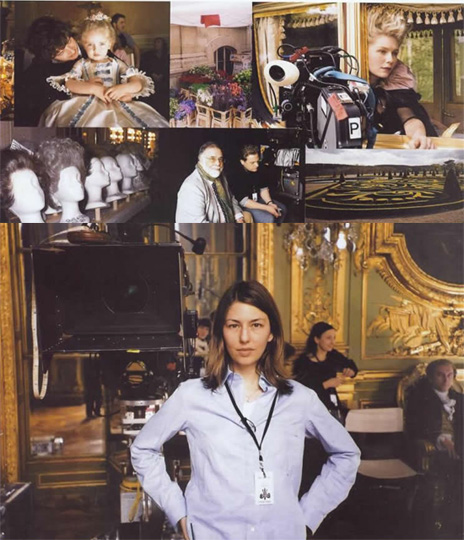 I guess the reason I have a love/hate relationship with Sofia is that I love aspects of her films, but I don’t love them as a whole. I always love her leading men, but she has a tendency to work with actresses that I just do not like (read: Kirsten Dunst, Scarlett Johansson). She’s worked with Elle Fanning in her latest film and that gives me hope because, like her sister Dakota, I think Elle feels so effortlessly alive and comfortable on the big screen. One thing I always love about her films is their soundtracks, which often feature music from her partner Thomas Mars. I feel like with each of her films there was a chance for greatness that she didn’t quite grasp. Maybe with her latest film he did. Maybe it’s the masterpiece she’s been working towards. I certainly hope so. 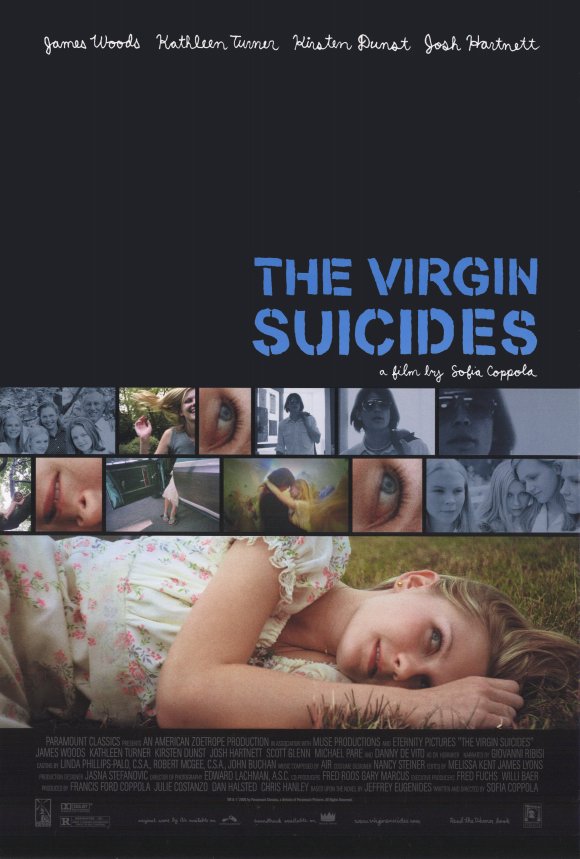 There are a lot of things about 1999’s The Virgin Suicides that I really like. The soundtrack by French band Air is pretty sweet. The cinematography, costume design, set decoration and art direction are all fabulous. I also really loved James Woods’ performance, but then again he’s always great. I thought the pace of the film was great and the ending was nothing short of perfect. I just don’t like Kirsten Dunst. I think she has had one good performance in her entire career, in Interview With The Vampire, and other than that she just does not translate well on screen. The film had a $6 mil budget and made over $10 mil worldwide. It was relatively well received by critics, but the success of the soundtrack overshadowed the success of the film. 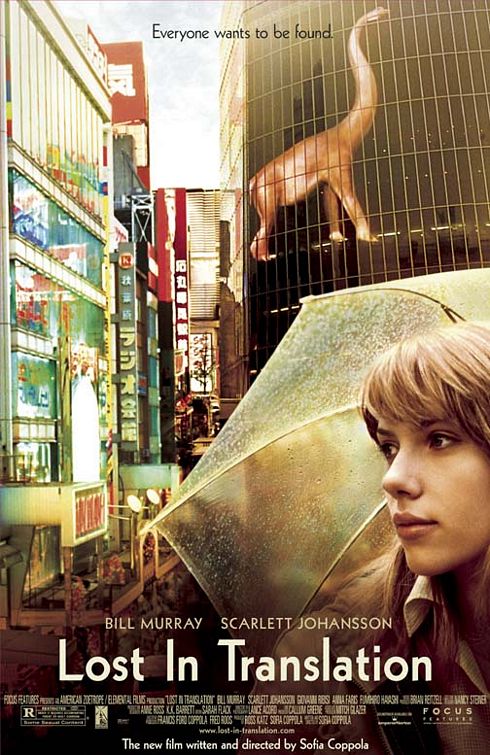 The first time I tried to watch this film I was a freshman in college and I only made it through about 15 minutes or so before I gave up on it. My taste in film has changed a lot in the last six years since then, so I decided to re-watch the film this weekend. I liked it better this time around. I still don’t like Scarlett Johansson and I feel like I might have enjoyed the film a lot more with a different actress in that role. Part of what bothered me, both this time and last time, is that Johansson is supposed to be playing a college graduate, but not only do I know she was only 17 or 18 when they filmed it, I don’t by her as playing older. She looks 18, she feels 18; she does not have the air of a college graduate and it was really hard to get past that. That being said, I thought Bill Murray was absolutely fabulous in his role. It was one of those perfect part for the perfect player situations. I also loved the cinematography and visuals of the film. It irritates me that it was rated R solely for about three shots of stripper tits towards the end of the film. I just feel like beautifully shot breasts should not be a rated R offense. But I guess the MPAA disagrees with me. The film had a $4 mil budget and grossed over $119 mil worldwide. It received high critical acclaim and maintains a 95% “Fresh” rating on Rotten Tomatoes. It was on numerous critic Top Ten lists and received countless awards and nominations. It was nominated for five Golden Globe awards, winning three: Best Actor in a Musical/Comedy Bill Murray (won), Best Actress in a Musical/Comedy Scarlett Johansson, Best Screenplay (won), Best Director Sofia Coppola and Best Picture Comedy/Musical (won). It was also nominated for four Academy Awards, winning one: Best Picture, Best Director Sofia Coppola (becoming only the third woman to be nominated for Best Director, the fourth being Kathryn Bigelow, who, earlier this year, became the first woman to win the award), Best Actor Bill Murray (his first and so far only nomination) and Best Screenplay Sofia Coppola (won). You can see all of the awards and nominations the film received here. 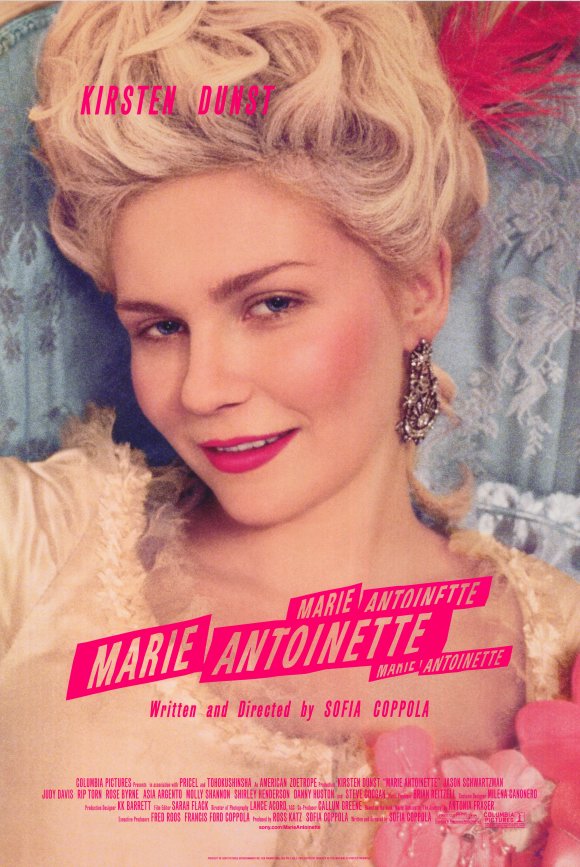 So  now we’re at Marie Antoinette, which is maybe the ultimate representation of my love/hate relationship with Sofia Coppola. When I first saw the television commercials for this and they were juxtaposing New Order’s Age of Consent with period costumes I thought, well either this is going to be fantastic or it’s going to suck so hard. It ended up being both. Aesthetically, I loved the film. I even loved all the anachronisms (yes, including the converse mixed in with the shoes) but something about the film was just off. Part of it has to do with my dislike of Kirsten Dunst. I could not believe her for one second as a period French woman, let alone a queen. But then, I don’t know who could have done the part better. Really though, when I first saw it I hated it entirely. I blame this partially on my friend Erin and me having seen several really disappointing films in a row, and this one being so not what I had expected it to be. A few years late, however, we threw a Maria Antoinette themed party, including having a post-punk filled playlist, and thus borrowed the film from a friend. I rewatched  the film twice during said party and afterwards and decided I liked it a lot more than I had initially. I will admit that I own this film on DVD (I bought it cheap at Rasputins in San Francisco) because the costumes and the sets are just so lush and it’s a fun film to watch if you don’t want anything too serious. The film was able to have unprecedented access to the Palace of Versailles during filming. Coppola has stated that the style for shooting was heavily influenced by the films of Wong Kar-wai, Terrence Malick, and Miloš Forman as well as by Lisztomania by Ken Russell. I can kind of see Wong Kar-Wai in the film and even Forman’s Amadeus, but I have trouble seeing where Malick fits in to the film. I remember reading when it premiered at Cannes it was both booed by the audience and received a standing ovation. I think I might have booed and given it a standing ovation. The film had a $40 mil budget and grossed about $60 mil worldwide. It received mixed-to-negative reviews by critics and currently has a 53% “rotten” rating on Rotten Tomatoes. It did however get nominated for and win the Academy Award for Best Costume Design. 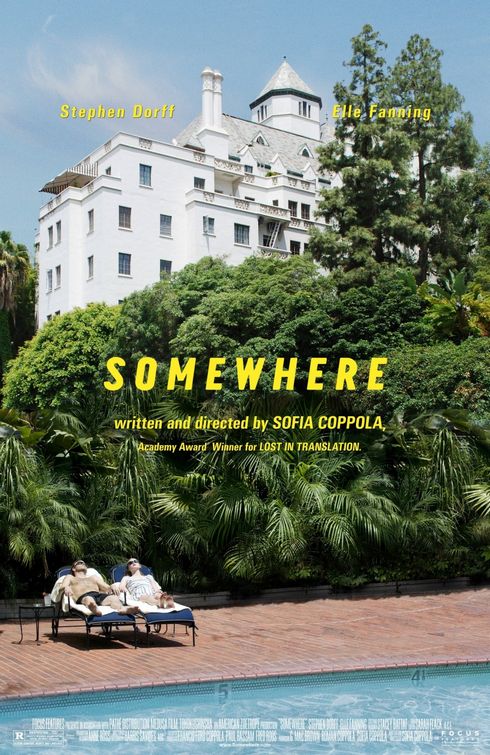 So now we’re at Somewhere, which is set to be released on December 22nd. As I said earlier, the film won the Golden Lion at the Venice Film Festival. Apparently it won the award after a unanimous vote. Quentin Tarantino, president of the jury, said the film “grew and grew in our hearts, in our minds, in our affections” after the first screening. Supposedly some of the scenes from the film are supposed to be slightly inspired by the director’s own childhood experiences as the daughter of  Francis Ford Coppola. I like Stephen Dorff and I like Elle Fanning and I love Benicio del Toro (although I don’t know how large his part is) and the trailer is quite wonderful, so I have high hopes for this film.

If you’re interested in buying any of Sofia Coppola’s films, you can do so here.

Posted on September 14, 2010, in Auteur of the Week and tagged Lost In Translation, Marie Antoinette, Sofia Coppola, Somewhere, The Virgin Suicides. Bookmark the permalink. 3 Comments.