For Your Consideration: John Hawkes In “Winter’s Bone”

Last year I concentrated my efforts on getting a Best Picture nomination for The Hangover. Clearly, that campaign failed. Regardless, I am rallying around one dark horse contender again: John Hawkes in Winter’s Bone for Best Supporting Actor. Hawkes is probably best known for his role as Sol Star on HBO’s Deadwood and star of the 2005’s indie flick Me and You and Everyone We Know. This year, however, he made waves opposite new-comer Jennifer Lawrence in one of the year’s most critically acclaimed films – Winter’s Bone. This film currently holds a 94% rating on Rotten Tomatoes. 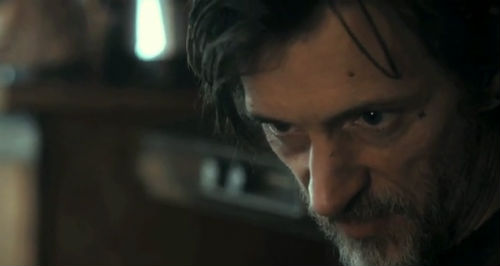 Hawkes gave, at least for me, one of the most powerful film performances this year as Teardrop. From the minute he is one the screen his presence is unwavering. He commands the screen. What I loved so much about his performance is that under the violent exterior, you could tell that Teardrop really cared about Ree (Jennifer Lawrence) and her plight. It’s hard to see him as a kind character though; it’s not in the character’s nature to show anything but strength and violence.

His performance kind of reminds me of Viggo Mortensen in 2007’s Eastern Promises. What I mean by that is, both actors completely give way to their performances, nearly becoming the characters. Both are violent men, but men you can’t completely hate.

So what are John Hawkes’ chances of getting an Oscar nomination? So far he has been nominated and/or won at several critics groups: Detroit (nominated, winner announced tomorrow), Indiana (nominated), San Diego (won), San Francisco (won), St. Louis (nominated, winners announced soon) and Washington D.C. (nominated). The Screen Actors Guild announces their nominees tomorrow and if Hawkes manages to get a nod from them, his chances of Oscar increase greatly. However, a SAG nod does not an Oscar nod guarantee, especially in the supporting categories. This year the supporting actor category is probably the richest category and hardest to predict. However SAG goes tomorrow, I for one will continue to be behind Hawkes until the bitter end. If you feel like joining the campaign on Twitter, add #JohnHawkesForOscar to your tweets when discussing anything Awards Season related and we’ll see what we can do!