Oscar Vault Monday – I Am a Fugitive from a Chain Gang, 1932 (dir. Mervyn LeRoy)

I saw this film for the first time last November, when I was in the midst of Noirvember. While I would argue that this is more of a precursor to film noir, rather than actual film noir, it is nonetheless a really wonderful film. Of the handful of Paul Muni’s films that I’ve seen, it is most definitely my favorite of his performances. Muni is one of those actors who completely disappears into the roles he plays and, sadly, is not all that well-known these days. This film was nominated for three Academy Awards, though it didn’t win any: Best Sound, Best Actor and Best Picture. The other films nominated that year were 42nd Street, A Farewell to Arms, Lady for a Day, Little Women, The Private Life of Henry VIII., She Done Him Wrong, Smilin’ Through, State Fair and winner Cavalcade.

The film is based on an autobiography written by Robert Elliott Burns that was published by Grosset & Dunlap in early 1932. In it Burns writes of his imprisonment on a chain gang in Georgia in the 1920s, exposing the cruelty and injustice of the chain gang system. He also writes of his multiple escapes and the uproar that they caused. Both the book and movie were credited with helping to reform deplorable conditions on Deep South chain gangs.

The character is renamed Sergeant James Allen in the film, a WWI vet who accidentally gets mixed up in a robbery that lands him ten years on a chain gang. Muni attacks this role with such amazing fervor. The story is so compelling and well told  that the audience gets sucked completely into the story and you really find yourself hoping Muni will find his way out of his hellish existence. Muni was nominated for Best Actor for his performance in this film (his second of an eventual six nominations; he won for 1936’s The Story of Louis Pasteur), but lost to Charles Laughton in The Private Life of Henry VIII. You can definitely see how this film, and this performance, influenced later prison films, such as The Defiant Ones and Cool Hand Luke.

Glenda Farrell is wonderful as Marie Woods, a shrewish proprietor of his boardinghouse where Allen lives after his first escape from the chain gang. Woods discovers Allen’s secret and blackmails him into marrying her, an actin he soon severely regrets. A sort of progenitor of the later Femme Fatale, Farrell’s Woods is a woman who does whatever she can to get what she wants, regardless of the consequences and the actress plays the role to perfection.

In contrast to Farrell’s Marie Woods, we’re introduced to Helen (played by Helen Vinson), whom Muni’s Allen truly loves. When he tries to get a divorce from Woods, she turns him in to the authorities and he is forced to go on the run yet again.  Vinson is luminous in this role, even if it is a bit clichéd. She’s everything that’s good and pure in the world, everything that Muni’s Allen can no longer have. 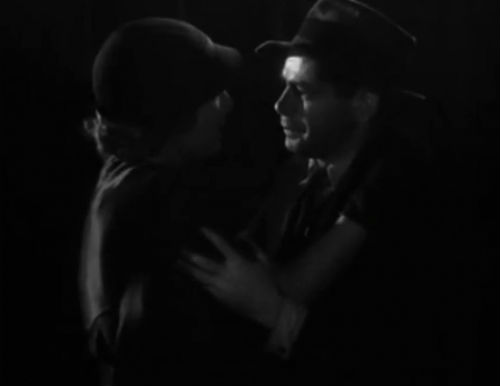 Which brings us the climatic final scene. This is one of my all-time favorite scenes. The lighting is just exquisite and a clear progenitor to film noir as we later see it in the 40s and 50s. It’s also one of the greatest tearful goodbyes in cinematic history. I dare you not to cry.

The final lines of the film, whispered as Muni’s face fades into blackness, are just downright harrowing:

Helen: How do you live?
James Allen: I steal.

If you’re interested in purchasing this film, you can do so here. Also, consider donating to the Film Noir Foundation and help them in their film preservation mission.

Posted on February 14, 2011, in Oscar Vault Monday and tagged 1932, Glenda Farrell, Helen Vinson, I Am a Fugitive from a Chain Gang, Mervyn LeRoy, Paul Muni. Bookmark the permalink. 4 Comments.