← Movie Quote of the Day – Bend It Like Beckham, 2002 (dir. Gurinder Chadha)
Some Love For Some Stylish Bloggers →

I remember seeing the trailer for this movie and feeling compelled to read the book because it just looked so utterly fantastic. The book is now one of my favorites (all of the other Ian McEwan books I’ve read I thoroughly hated). I guess part of what I loved about the book was imagining the characters the way they were in the trailer. So when it came for the film to actually open I was so full of apprehension; would it live up to the book? or at the very least to the promise of its trailer? Rest assured, I did not feel let down. The film was nominated for seven Academy Awards, winning one: Best Score (won), Best Art Direction, Best Cinematography, Best Costume Design, Best Supporting Actress Saoirse Ronan, Best Adapted Screenplay, Best Picture. The other films up for Best Picture that year were: Juno, Michael Clayton, There Will Be Blood and winner No Country For Old Men.

Despite these seven nominations, Joe Wright was not nominated for Best Director. It’s one of those films that apparently was good enough to be up for Best Picture, yet not because of its director. I don’t think I will ever fully understand that. (Though I will admit that Julian Schnabel’s work on The Diving Bell and the Butterfly was amazing and he fully deserved his Best Director nomination). The book is rather complicated; it’s broken into three parts and the first part is told from multiple point of views. This is something I was unsure would translate well into a film. Wright, however, managed to keep the general narrative structure of the book wonderfully. Just as in the book, you see the key even – at the fountain – from several perspectives. The film also transitions from the three sections of the book effortlessly. 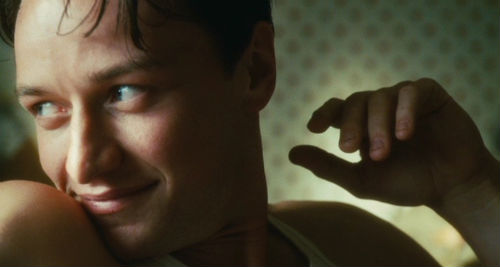 James McAvoy is wonderful as Robbie Turner, the son of the hired help who through academic excellence earned his way to Cambridge. The chemistry between him and Keira Knightley, who plays the eldest daughter of the Tallis family – Cecelia, is sizzling. In the first third of the film he is silent more often than not, but when he speaks it’s clear that he chooses his words wisely. The pure joy on his face when he writes the letter to Cee, the one he has no intention of sending her, is exuberant. Conversely, he wears shock and embarrassment when he realizes he did send the wrong letter – and by the hands of Cee’s little sister Briony – perfectly. In the latter two sections of the film, at the onset of WWII, McAvoy’s Turner is already a partly broken man, having been sent to prison for a crime he didn’t commit. By the time he gets to Dunkirk (a wonderful scene I intend to discuss a little later), he has nothing left to keep him going and his utter despair  is palpable. McAvoy was coming off a breakout supporting role in 2006’s The Last King Of Scotland, opposite Forrest Whittaker (who won the Best Actor Oscar for his performance) and his turn in this film solidified him as a genuine star.

I sort of have a love-hate relationship with Keira Knightley. I love some of her earlier films (Bend It Like Beckham, Love, Actually, the first Pirates film), but it seemed the more exposure she got the more she tried to “act”. By this, I mean grand gestures, overly dramatic speeches, etc. (in my opinion, she ruined Elizabeth Bennett and that Oscar nomination she received was a joke). So I was a little hesitant going in to this film. However, Cecelia is kind of overly dramatic and a bit of snob, which fit Keira’s brand of acting perfectly. Like I said earlier, she and McAvoy have amazing chemistry. From the minute the two of them are on screen together you just know there’s more to their relationship than meets the eye. Both Knightley and McAvoy received Golden Globe nominations for their performances and I really thought that would result in Oscar nominations as well. Although it did not, both have continued to give great performances over the last few years.

Which brings us to Briony Tallis. Briony is the reason we have a story, so I guess you can’t 100% hate her. But boy do I hate her. I hated the character in the book and I hated her in the film. She’s played by three different actresses, representing three different ages: Saoirse Ronan (age 13), Romola Garai (age 18), Vanessa Redgrave (age 77). Ronan received multiple awards and nominations, including a Golden Globe, BAFTA and Oscar nomination for Best Supporting Actress. The thing with Briony is, yes she is a girl when she first accuses Robbie of a crime (that he did not commit, but based on her testimony, he is convicted and sent to prison). But she acts out of malice and jealousy. I will never be convinced otherwise. She tries several different ways to “atone” for her actions (hence the name of the book/film). First she gives up her spot at Cambridge to be a nurse. While this looks like a selfless act, it’s really hard to see it as such. Later, when she is a well established author, she confesses that the ending she gave Robbie and Cee in her book was not what really happened to them (spoiler alert: they both die in WWII), but she felt if she could give the fictional versions of them some happiness it could in some small way make up for the happiness they were denied in life. Bull. Shit. I thought it was snide and selfish in the book and I feel the same way about the grown Briony in the film. Now, I understand you are generally supposed to dislike, hate even, this character. I also can see what a great creation she is, a character so well developed you can truly hate them. So kudos to McEwan, I guess. Ronan, Garai and Redgrave are all wonderful in this part. They capture her self-rightiousness wonderfully.

Now I wanted to talk about a few of the technical achievements of the film. For one, the tracking shot when Robbie and co. first arrive at Dunkirk. I think the shot is about 5 minutes long or so and it is so beautifully melancholic. It’s one of those scenes in a film that, while self-aware, remind you as a viewer that filmmaking is an art form. This is the kind of unique creation that can only exist with film. Dario Marianelli’s score creates this wonderfully haunting mood. Add to all of this James McAvoy’s forlorn face, he thought if he made it to Dunkirk everything would be alright, only to discover this seeming wasteland. 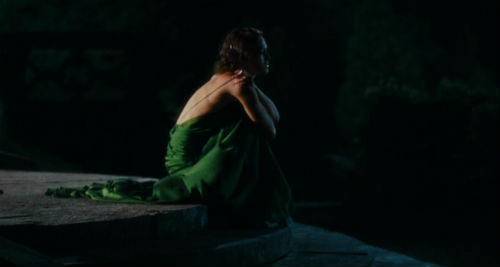 Lastly, I must talk about the green dress.  I just love how McEwan described the dress in his book: “…reached for the gown, her green backless post-finals gown. As she pulled it on she approved of the firm caress of the bias cut through the silk of her petticoat, and she felt sleekly impregnable, slippery and secure; it was a mermaid who rose to meet her in her own full-length mirror.” Jacqueline Durran’s execution of the concept was absolutely perfect. It fit Knightley like she was born wearing it. The dress made a huge splash when the film first premiered and is definitely one of the most memorable costumes from the last decade, if not all of cinema.

← Movie Quote of the Day – Bend It Like Beckham, 2002 (dir. Gurinder Chadha)
Some Love For Some Stylish Bloggers →