So when I first rented this film about seven years ago, I thought it was pretty, but boring. I watched it again last night hoping maybe my opinion would change. This was not the case. There are moments in this film that are truly wonderful, but as a whole it, for me, feels lifeless. It’s a pretty sexy subject, too, so it’s a shame they didn’t find a way to capture that (see The House of Mirth for a film that does it right). The film was nominated for eight Academy Awards, winning three: Best Art Direction (won), Best Costume Design (won), Best Cinematography, Best Adapted Screenplay (won), Best Supporting Actor Denholm Elliott, Best Supporting Actress Maggie Smith, Best Director and Best Picture. The other films up for Best Picture that year were Children of a Lesser God, Hannah and Her Sisters, The Mission and winner Platoon. 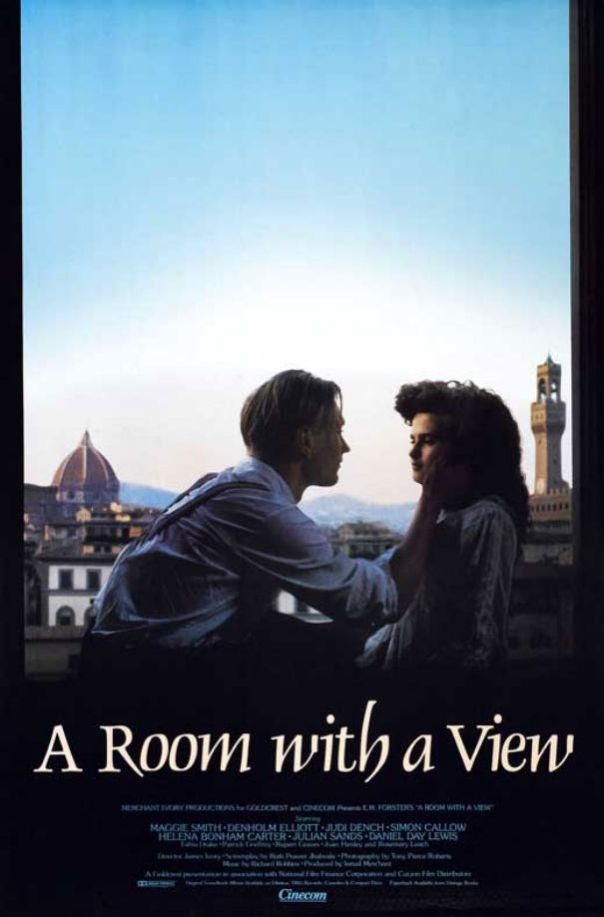 I don’t really feel like be the zillionth person to write about Merchant/Ivory and their collaborations, so I suggest you go read about them here. 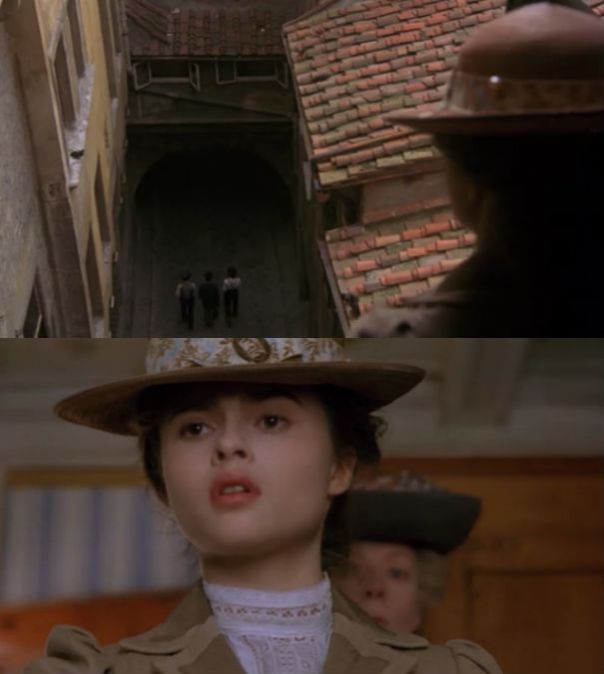 The film is based on the book of the same name by E. M. Forster about repression and the change in ideas from Victorian England into Edwardian England. We first meet our protagonist Lucy Honeychurch (Helena Bonham Carter) as she opens the windows to her room with no view. This upsets her chaperone, cousin Charlotte (Maggie Smith)  greatly. At dinner, this is all the two can talk about. They meet the unconventional father and son Emersons (Denholm Elliott and Julian Sands), who offer to give them their rooms, with a view. Mr. Emerson states that men don’t care what their view is, but women do. Also, his son George begins to flirt with Lucy. In this opening sequence we see both the repression of Victorian England in Charlotte and the open-minded change of the turn-of-the-century in the Emersons, with Miss Lucy caught in the middle. 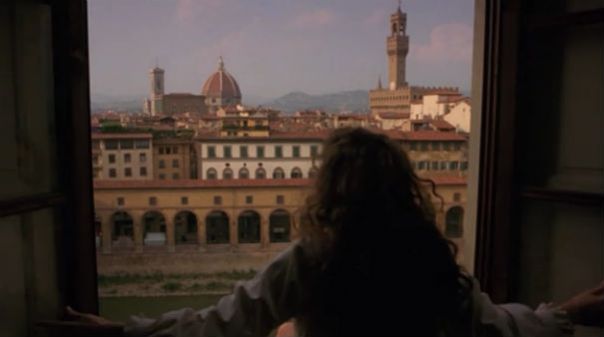 Lucy then gets her view. The beautiful shots of Italy throughout this segment are quite wonderful, though I do wish the aspect ratio had been super-widescreen. But maybe that’s just me. 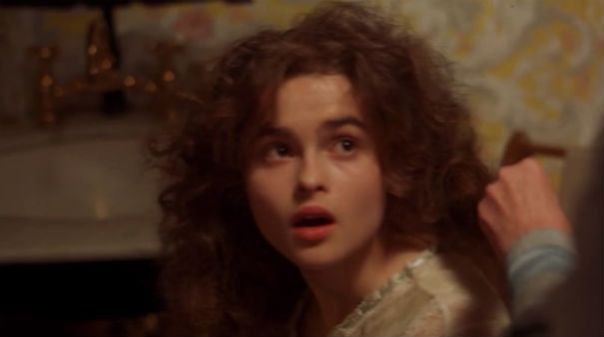 Let’s talk about the flawless Miss Helena Bonham Carter, who was twenty years old when this film was released. It’s strange to think that she started out in these kind of films when one looks at her later career. Lucy is a pianist who plays with vigor and passion (as noted by several characters), and who, when with her family is not afraid to speak her mind, but who tends to be quite reserved when on her own. Or, when she does speak her own thoughts to acquaintances, later apologizes for seeming so forward. She’s a mess of contradictions. Helena Bonham Carter was nominated for Best Actress for her work in 1997’s The Wings of the Dove and Best Supporting Actress for 2010’s The King’s Speech. 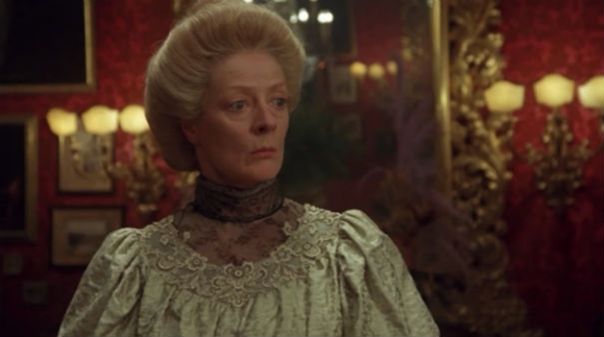 Maggie Smith plays Lucy’s unmarried cousin and chaperone Charlotte, who’s fully stuck in Victorian snobbery. There are hints of indiscretions in her past, that ended badly and caused her to be the way she is. Her arc throughout the film is one of the most interesting and fully realized. Maggie Smith has been nominated for six Oscars, winning twice: Best Supporting Actress for Othello (1965), California Suite (1978, won),  A Room With A View (1986) and Gosford Park (2001), Best Actress: The Prime of Miss Jean Brodie (1969, won) and Travels With My Aunt (1972). 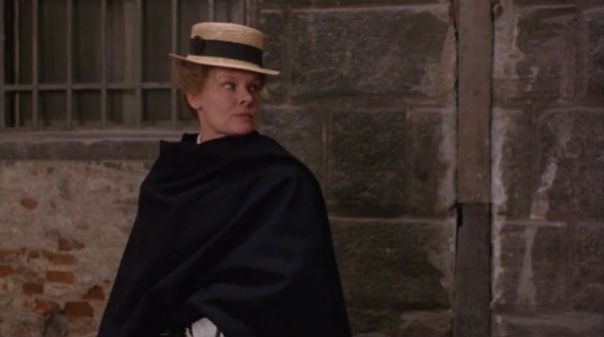 Dame Judi Dench as a small, but important role as a lady novelist who takes some events in Lucy’s life and puts them in her most recent novel. Dench has also been nominated for six Oscars, winning once: Best Supporting Actress: Shakespeare in Love (1998, won), Chocolat (2000), Best Lead Actress: Mrs. Brown (1997), Iris (2001), Mrs. Henderson Presents (2005) and Notes on a Scandal (2006). 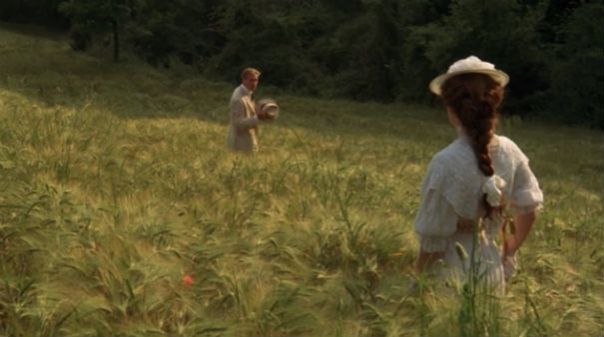 I love films that have shots inspired by paintings, this moment between Lucy and George seems like it’s a Mary Cassatt painting or something. 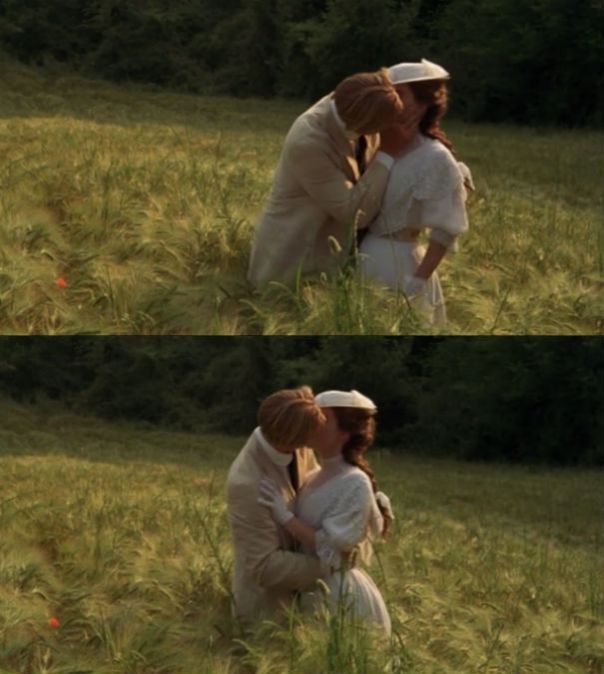 George is a philosopher and believes in acting on his impulses. Lucy has come to find the men, mostly because she has become bored with her cousin. What she finds is something a little bit more. When Charlotte finds the two would-be lovers mid-embrace, she whisks Lucy away and makes her promise not to tell anyone, so as to save both their reputations. 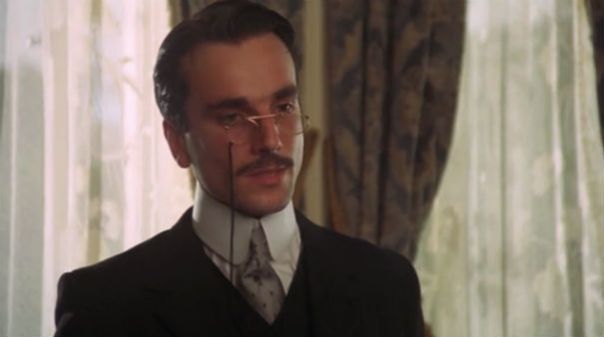 Upon returning to England, Lucy decides to marry Cecil Vyse (Daniel Day-Lewis), a wet blanket if there ever was one. Cecil is a great example of too much culture, too much thought and not enough passion. DDL is wonderful in this role. It’s really hard to hate him because of the actor, but oh man the whole time you just want to yell at Lucy, WHAT ARE YOU DOING?! Day-Lewis would go on to receive five Academy Award nominations for Best Actor, becoming the first to win in that category three times: My Left Foot (1989, won), In The Name of the Father (1993), Gangs of New York (2002), There Will Be Blood (2007, won) and Lincoln (2012, won). 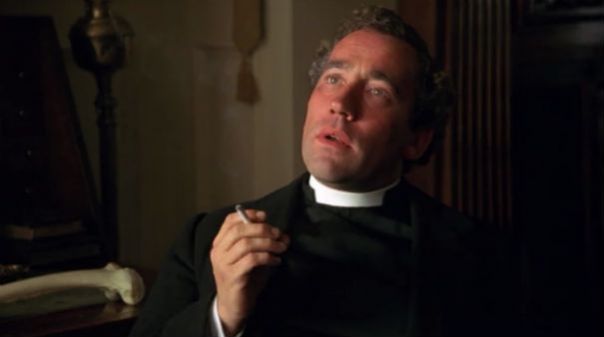 Which is kind of what Rev Beebe (Simon Callow) wants to shout at both of them, but that would be stepping beyond his boundaries. He knows that passion that lies in Lucy (he saw her play the piano) and he knows Cecil is not the person to awaken it in her (he’s also seen her with George). 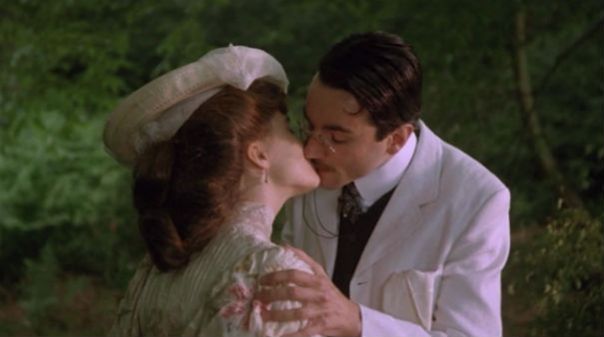 After becoming engaged we find out that Lucy and Cecil have never kissed (oh those Victorians! try out that car before buying it, Lucy!). When they finally do, it is the most awkward of kisses and ends with Cecil’s glasses getting knocked off his face. Instead of awakening a passion in Lucy, all it does is remind her of the passion she shared with George in Italy. 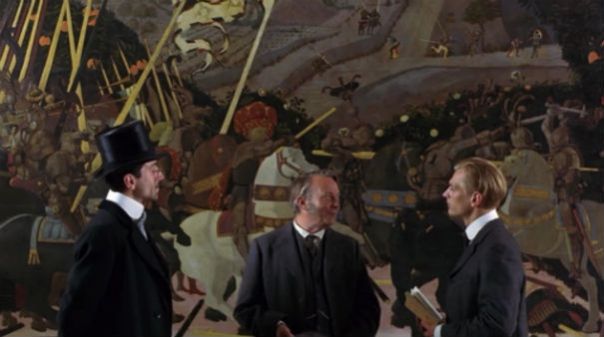 Cecil, being the dick that he is, decides he wants to mess with his neighbor and invites perfect strangers that he meets at the National Gallery to come rent their house. These strangers wind up being none-other than the Emersons! I really love this shot. I wish the whole film were as gorgeously composed as this shot. 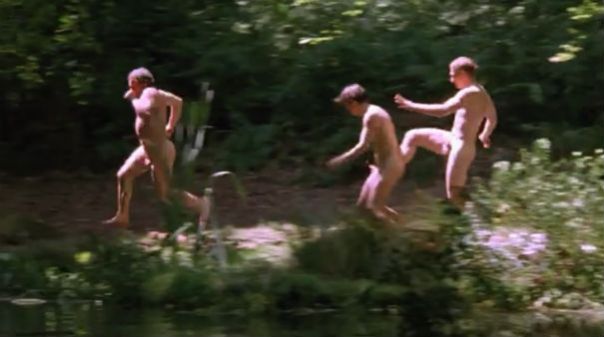 Then we get basically the only scene I remembered from the first time I saw it: naked revelry. This movie is rated PG and it contains a lot of full frontal. A lot. What is going on here? Repressed homosexuality? I’m not sure. I wish the director had been able express some sort of point of view with the scene instead of just presenting it. 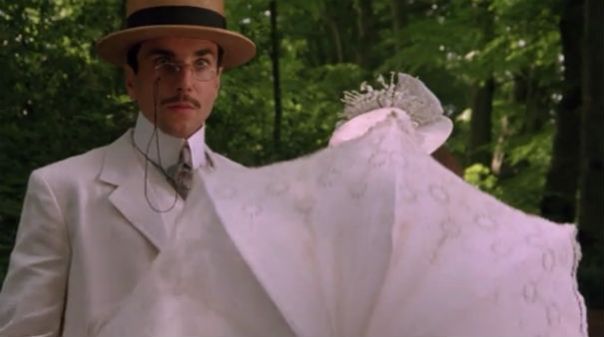 Cecil is very upset by this display. Lucy hides her eyes with her umbrella, but once she is away from Cecil she looks. Oh she looks. 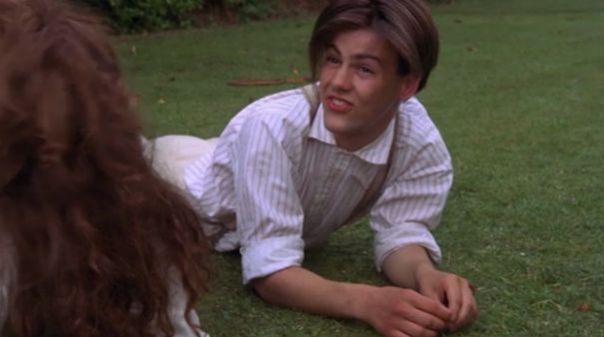 Rupert Graves plays Lucy’s brother Freddy and really all I have to say about him is that 1) look at his lips. I want to kiss them. I want someone to kiss them and no one does. 2) That hair! But also, Freddy is an interesting character because he is kind of a mixture of Cecil’s snobbery and George’s free-thinking. 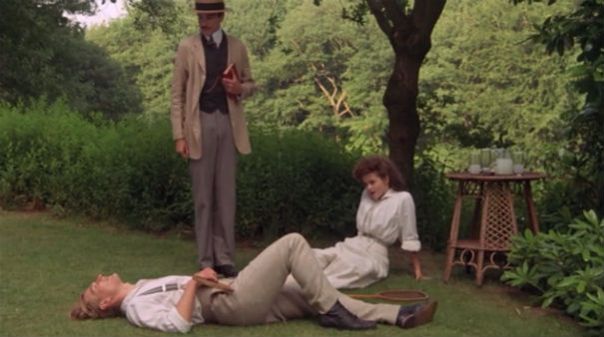 I think the staging here perfectly displays all three of their personalities. George is relaxed, Cecil is stiff and reserved and Lucy is caught in between. 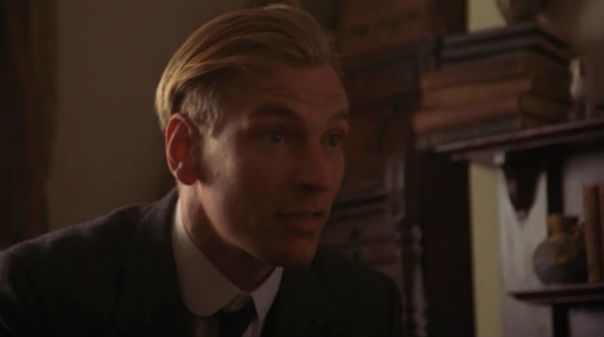 I wish the relationship between George and Lucy had been developed more, because as it stands in the film I don’t really care about any of characters. Actually, that’s the problem with the whole film. Why do I care? I don’t. I do, however, like George’s speech to Lucy. It would have more of an impact, though, if I cared about the characters:

“He’s the sort who can’t know anyone intimately, least of all a woman. He doesn’t know what a woman is. He wants you for a possession, something to look at, like a painting or an ivory box. Something to own and to display. He doesn’t want you to be real, and to think and to live. He doesn’t love you. But I love you. I want you to have your own thoughts and ideas and feelings, even when I hold you in my arms.” 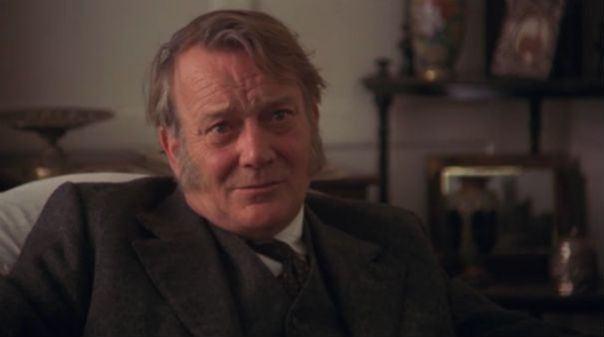 Denholm Elliott is quite wonderful in his role, the free-thinking father whose son wreaks havoc on Miss Lucy and her world view. I wish we had gotten more of him. Elliott was nominated for Best Supporting Actor for this film. 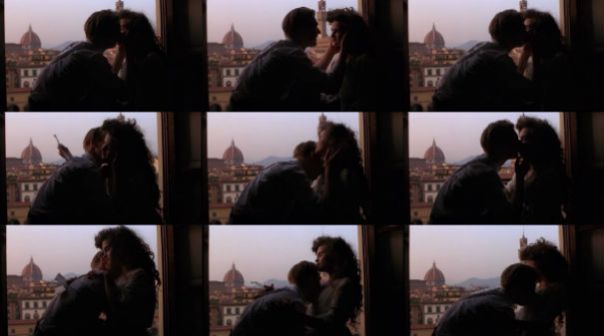 The last sequence of the film, wherein Lucy has broken with Cecil and gone off with George and the two are on their honeymoon, back at the room with a view, is really hot. Like, smokin’ hot. He kisses her boob hot. If the whole film had been as hot as this last sequence of shots, oh man. But like I said, where this film failed, The House of Mirth succeeds. In spades.