I can’t remember the first time I saw this movie, but it must have been a few years before 1997. I know this because in 1997 Con Air was released and at the time my favorite actors were Nicolas Cage (this was due to early viewings of his 80s films, and early 90s rom-coms), John Cusack and John Malkovich, thus I thought they made that movie just for me (it even had a Trisha Yearwood theme song!). The reason I loved Malkovich so much was this movie, so I would be lying if I didn’t say most of this piece is going to be about his performance. Places in the Heart  was nominated for seven Academy Awards, winning two: Best Costume Design, Best Supporting Actor John Malkovich, Best Supporting Actress Lindsay Crouse, Best Actress Sally Field (won), Best Original Screenplay (won), Best Director and Best Picture. 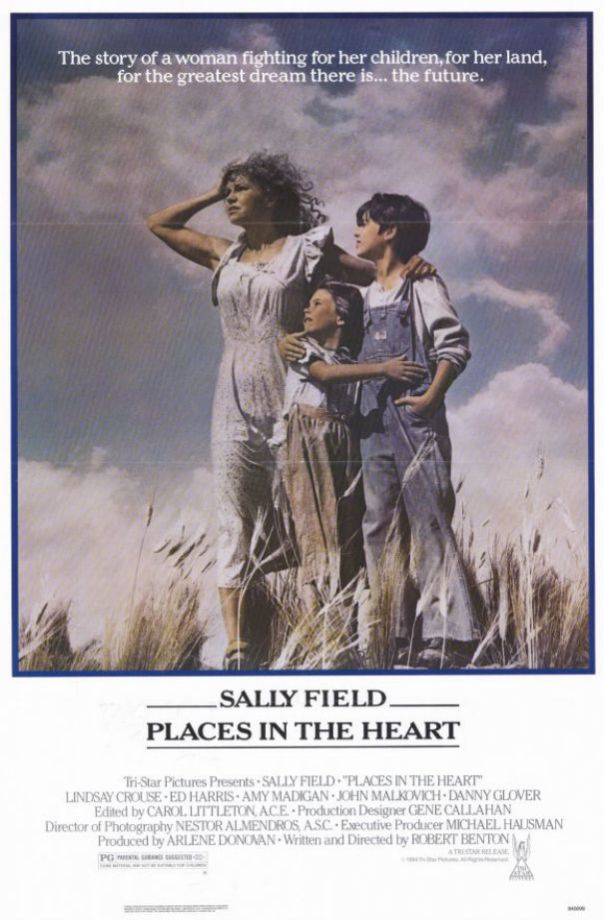 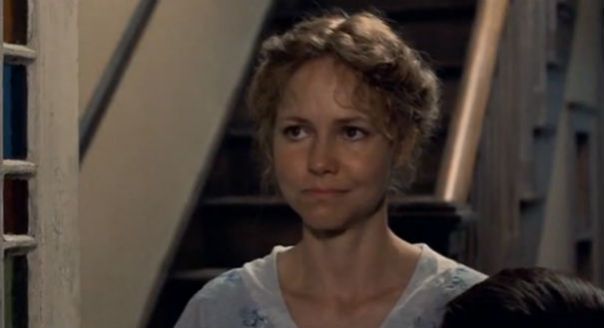 Sally Field plays Edna Spalding, a woman raising two children in 1935 – the heart of the great depression. Her husband Royce Spalding (Ray Baker) is the Sheriff. He’s called away during Sunday dinner – fried chicken and all – to deal with a drunk and disorderly. When he is accidentally killed, Edna is forced to find a way to keep her family together and save her home. Field is a force of nature in this film, doing everything she can for her family and using love, goodness and faith to keep her way. Field won Best Actress at the Oscar for her performance, having previously won the award for 1979’s Norma Rae. She received a third Oscar nomination, for Best Supporting Actress for 2013’s Lincoln, though she lost to Anne Hathaway in Les Misérables. 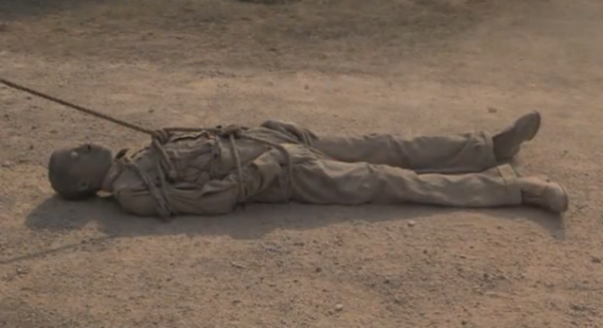 One of the many themes in the film is racism. This being the South, Wylie (De’voreaux White) the boy who accidentally shot the Sheriff, is not given a proper trial, but rather dragged through the streets and eventually hung. This is done by the same people who attend church services every Sunday. This was done on a Sunday. The criticism of this hypocrisy could not be more pointed if it tried. 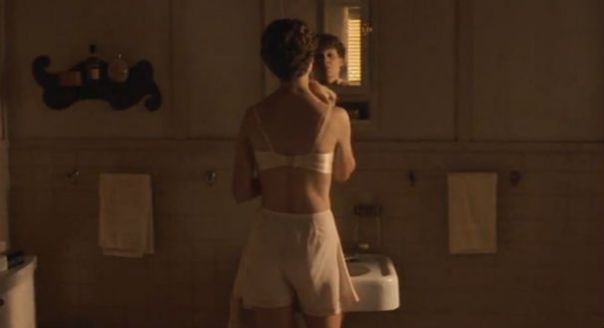 Lindsay Crouse  plays Edna’s sister Margaret Lomax, who stands by her sister through this time of crisis as best she can, though she herself if going through quite a bit. She has a young a child, which appears to be her husband’s excuse for having an affair with Margaret’s best friend Viola. You know, because kids take up a lot of time and mother’s just aren’t that into doing it all the time. Something like that. Crouse received an Academy Award nomination for her fearless performances as a woman who, like Field, does her best to hold herself and her family together despite the odds. Crouse lost to Peggy Ashcroft in A Passage to India. 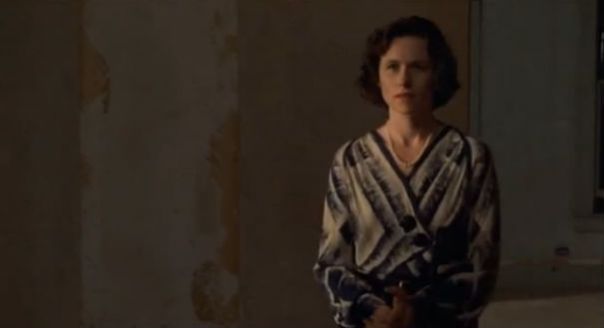 Amy Madigan plays Viola, the other woman, who herself if married to another man. By the time we come into the story, Viola has clearly had enough of the affair. She can’t stand hurting her husband and her best friend, and she also can’t stand not having Wayne all to herself. What I like about this character, is she doesn’t feel like a cliché. She feels like a woman in the middle of a crisis – just like Edna and Margaret – only her crisis is within herself. She’s not presented as a harlot, or as a selfish hussy. She’s a woman who made choice she’s no longer okay and she’s trying to figure out the next best course of action.

Ed Harris plays the philandering Wayne Lomax, though he, too, is not just a cliché. He’s a conflicted man, who loves his wife, but who felt a connection with another woman. I like the films that explore fidelity and sexual attraction from an honest perspective. Human emotions are more complex than we often give them credit, and our relationships anything but black and white. A promise is a promise, but what happens when one person breaks it? Is it a failure to trust someone again? Is love ever enough? The answer isn’t always going to be the same for every person, just as every relationship is going to be different. I love the way Benton deals with these two and their broken promise throughout the film. Harris would go on to be nominated for four Academy Awards: Best Supporting Actor Apollo 13 (1995), The Truman Show (1998),  The Hours (2002) and Best Actor Pollock (2000). 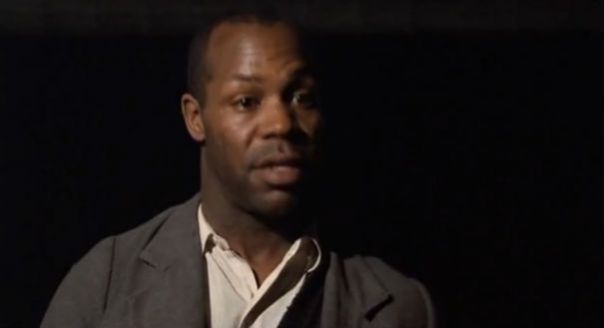 Shortly after the sheriff’s death, Moze (Danny Glover) appears on Edna’s doorstep asking for a job. Some mishaps happen, but eventually he comes to stay with Edna and her family and helps her grow cotton. While Moze is definitely a version of the “magical negro” trope, Glover does his best to bring out the humanity of the character and help him transcend the trope. This was one of Glover’s earliest performances, and since he has  made almost 150 films and appearances on television. The following year Glover gave an amazing performance in Best Picture nominee The Color Purple and I’m still shocked that he didn’t receive Oscar nominations for either film.

The scenes in which the growing and picking of cotton are depicted always kill me because it just looks like such a hot an awful job. 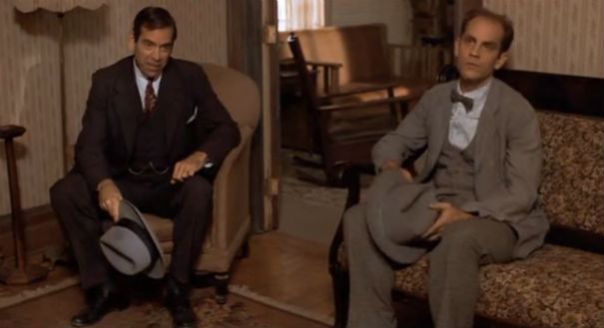 Which brings us to the reason Edna decides to start growing cotton in the first place: the bank has told her she owes $250 or she had to get out. The head banker Albert is played by Lane Smith, who I always love because he was on Lois & Clark (one of my favorite shows as a kid). Albert suggests that Edna sell her house and split up her family, but she refuses. After Moze helps her start growing cotton, Albert brings his brother-in-law Will to live with Edna as a boarder. He claims it’s to “help her out” but even Edna can tell he’s just trying to get Will out of his hair. Will was blinded in WWI and has become a bit bitter.

Like I said earlier, this is the movie that made me fall head over heels for John Malkovich. He’s so pale and sickly, but he’s got that voice and oh! that bow-tie. Little me was smitten. But, really, Malkovich is great in this film. Of all the characters, he goes through one of the greatest transformations. He starts the film angry and bitter at the world, and as the film progresses he becomes part of the Spalding family and friends with Moze. This was Malkovich’s big screen debut and he received his first of two Best Supporting Actor Oscar nominations. The second was for 1993’s In The Line of Fire. He lost the first time to Haing S. Ngor for The Killing Fields (in which he also appeared) and he lost the second time to Tommy Lee Jones in The Fugitive.

In one of the film’s most memorable scenes, Moze is attacked by the KKK and Will comes out to his defense. However, because he is blind the members of the KKK use noise to trick Will into firing all his bullets.

What they don’t realize is that because Will is blind, the rest of his senses have grown stronger and he recognizes the voices behind the men. This freaks them out, obviously, and they leave. 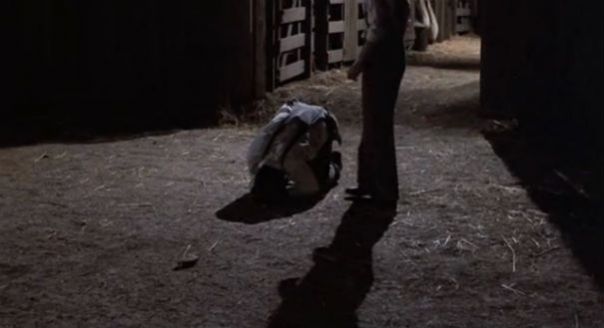 We then have a very tender moment between Moze, who has broken down into tears after this close call with his life, and Will, who does his best to comfort him. What follows is another heartfelt scene between Moze and Edna, after Moze says he must leave. Edna reminds him that he is the man who brought the first cotton in of the year and no one can ever take that away from him. Through their friendship, both Edna and Moze found a strength within themselves that they will carry for the rest of their lives.

I wanted to end with the final scene of the film, which you can watch above. In it we have all the characters – including those who have left or died – in church on Sunday while the preacher preaches about love. It’s a bittersweet ending, because we see that through love Edna brought broken people together and carved out a family and a life. But at the same time there are people who go to church on Sunday and hear this message of love, then go out and are members of the KKK, will turn out their own brother, will do as little as they can to help a widowed mother of two, etc.  In this case, though, love outweighs the hypocrisy of the town and there is hope for the future.