Gillian Armstrong is one of my favorite directors. Later on I will write about My Brilliant Career and Little Women (1994), which is one of my all-time favorite movies. I’ve seen that one more than any other film I think. Which brings me to this week’s Female Filmmaker Friday on Armstrong’s sophomore feature Startruck. I actually bought this film without knowing anything about it other than it was directed by Armstrong and came in a shiny pink DVD case. Amazon recommended it when I bought Susan Seidelman’s Smithereens. Definitely one of the best cold-buys I’ve ever done. 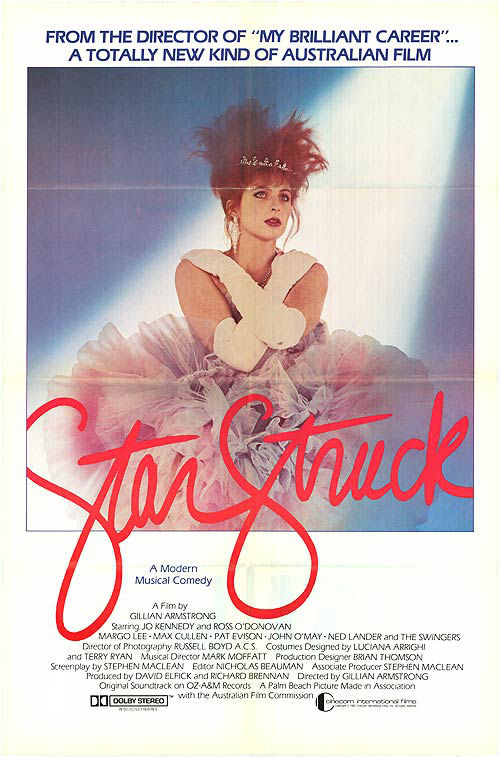 The film has a pretty basic plot: two teenage cousins in Australia dream of being rockstars. Jackie is the singer, her cousin Angus is the lyricist/would-be manager. They’re both DIY/alternative teens and the songs they start out singing are very New Wave-y. After pulling a big stunt, Jackie lands a shot on a major televised singing special, but everything that’s special about her gets stripped away, leaving a run-of-the-mill pop star. Jackie then has to figure out what’s more important – instant fame or her unique personality. I really love the relationship between Jackie and Angus. They’re cousins and they’re best friends and you can tell they’ve grown up together and understand each other better than any other people on the planet. I also love their DYI look. I’m a big fan of these movies from the 1980s that shed a little bit of light on the decade’s alt culture. Angus gets Jackie a spot at amateur night at a local club, earlier that day she spots a giant kangaroo costume in a shop and decides that’s what she needs to wear to stand out. We get a great shot of Angus driving them to the club on a motorcycle wearing the costume. Later, Jackie appears on stage wearing, then sheds it as her song progresses. 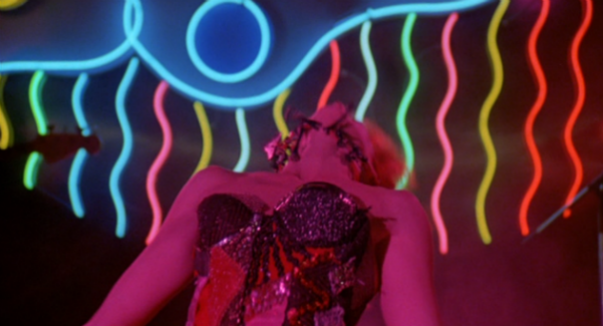 While the song may not be the best ever, she’s got “it” and everyone can tell. The art direction in this club (and the whole movie, actually) is basically everything I love. Neon and bright colors and image overload. Fabulous. Jackie meets the lead singer of the rock band that played right before her, goes off with him and has a one night stand. She’s frank about what she wants from him (not much) and it’s refreshing to see a young woman’s sexuality displayed in such an empowering and positive way. Too bad thirty years later, we don’t get this that often. 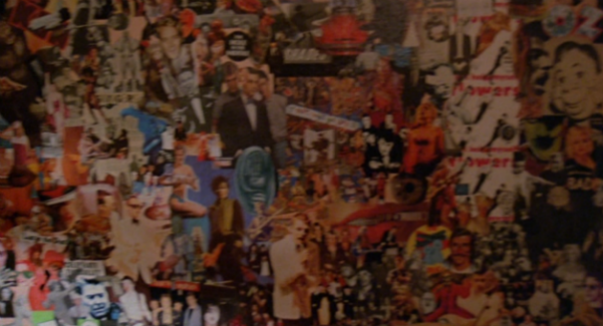 Speaking of image overload, I just had to include this shot of Jackie’s wall, because anyone who has been to any of my houses knows this is how I like to decorate as well. It’s a nice way of showing star-worship, as well as the plethora of images available to people in the modern world. After Jackie comes back from her one night stand, Angus makes her sing one of his songs, at which time we get this fabulous faux-surf scene with Jackie clad in a spectacular vintage swimsuit. These two have such a great relationship, it’s a delight to spend a whole movie with them. Angus decides the best way to get attention is to pull a big stunt, so he arranges for a bunch of reporters to come watch Jackie walk a tightrope downtown in “the nude.” She’s not really nude, it’s a really great fake boob shirt (or plastic costume?). It’s so funny and so subversive and I love it so much. Jackie has no inhibitions and she’s not going to let anyone tell her how to act, but she’s also not going to do things alone and whatever Angus drags her into, she makes sure he is just as culpable. Because of the stunt Jackie gets on a nationally televised singing/variety show, though like I said, they strip her of all her personality and it’s a bit of a disaster. She then goes off with the host, expecting a similar one night stand, but instead gets a really bizarre and beautifully choreographed synchronized swimming extravaganza with the host – who it turns out is gay – and a bunch of swimsuit-clad dudes. It’s very Busy Berkeley meets Rocky Horror meets Esther Williams and it is so wonderfully photographed. 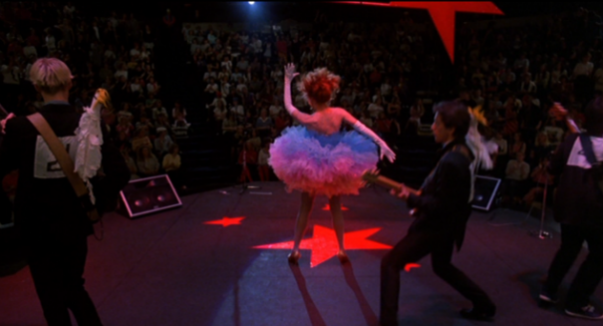 In the end, Jackie stays true to who she truly is and that’s really the best for everyone. Her star power shines and it’s hinted that she’ll go far.