I hope you all had a great Noirvember! Aside from watching 30 noirs, I watched four 2014 releases and seven other films (Including two Joan Crawford films; I’ve now seen 66 of her films!), bringing my total for the month to 41. I also read eight books! Actually, that brings me to 52 books, which was my goal for the year. Huzzah! As always, a breakdown of what I watched follows after the cut.

Be sure to watch my YouTube videos for thoughts on all the films I watched last month.

Obviously, I watched a lot of great film noir this Noirvember. Two of my favorites were set right here in Los Angeles, they also were my first and last noirs that I watched: Act of Violence and The Unfaithful. They’re both films dealing with crimes committed during the war (in one, the husband does something overseas and it comes back to haunt him and his wife; in the other the wife does something while the husband is off fighting and that comes back to haunt them). Both films were shot mostly on location around Los Angeles (this was because during the war and for sometime after, all film productions were limited to a 2,000 set budget and that forced filmmakers to creative). Both films have all-star casts: Van Heflin, Robert Ryan, Janet Leigh, Mary Astor, Lew Ayres, Zachary Scott, Ann Sheridan and Eve Arden. I definitely think these would make a really great double feature of post-war L.A. angst.

Another noir I saw that really stuck with me was this little Fox noir starring Lucille Ball and Mark Stevens. It’s got some of the best sound design I’ve ever heard from a film (new or old!) You really feel like you are in a noisy, bustling city the entire time you’re watching the film. Lucille Ball is great, though people expecting her Lucy persona will be disappointed; she’s a tough dame, with just the right amount of tenderness.

Beyond The Lights, 2014 (dir. Gina Prince-Bythewood) 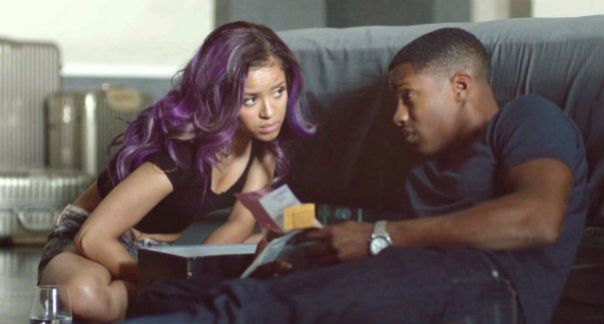 So many of my favorite films this year were directed (and often written!) by women and this film definitely will rank among them. It’s a melodrama of the old school sort, but it feels fresh and all of the actors are so damn pretty and so damn talented, it all works really well. It’s kind of Gypsy-meets-The-Bodyguard, but it’s also so much more than that. There’s a subversive discussion of race that floats just under the surface, but always reminding you that there’s more here that what meets the eye.

What a fun, zany film! It was very racy at the time of its release due to its plot – Jane Fonda is a 23-year-old virgin who decides she needs to sleep with someone so that her boyfriend won’t be afraid of her virginity and will ask her to marry her. Yes, that’s basically the plot. It’s a farce, so people keep missing people and at one point someone gets mistaken for someone else in a big way. In the end, though, everything works out just like you want it to and all is tidy and right in the world.

Another stunning film by a lady in 2014 (and one of two directorial debuts by women that will make my end-of-the-year list), this is a black & white feminist vampire western teensploitation romance from the Jim Jarmusch school of characters over plot and it is everything I want in a movie. Run, don’t walk, to see this movie now!

So that was Noirvember. It is now December and I’ve got a lot of films to try to cram into my month! Also, at the end of the month I’m going to make a big announcement about some changes that will be happening to this site and to my watching habits. Stay tuned for that and I hope you have a great December in films!