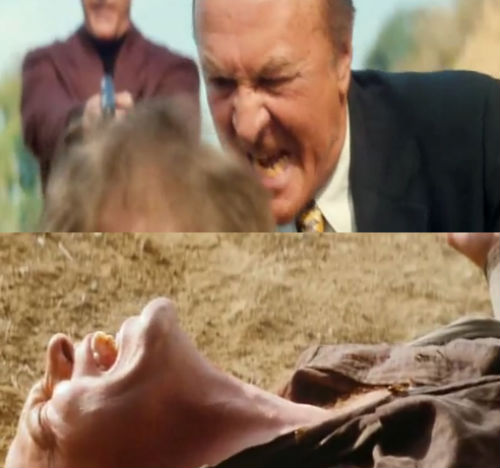 Mr. Eddy: [to a tailgater after running him off the road, beating him] Don’t you ever fucking tailgate! Ever! Do you know many fucking car-length it takes to stop a car traveling at 35 miles an hour?! Six seconds, Charlie! That’s a hundred and six fuckin’ feet, per second! If I had to stop suddenly, you woulda hit me! I want you to get a fuckin’ driver’s manual, and I want you to study that motherfucker! And I want you to obey the goddamn rules! Fifty-fuckin’ thousand people were killed on the highway last year ’cause of fuckin’ assholes like you! [punches him in the face] Tell me you’re gonna get a manual!

Auteur of the Week: David Lynch

To begin, I’m going to quote from the Wikipedia entry about auteurs, in order to establish what I mean when I call David Lynch an auteur.

The term auteur (French for author) is used to describe film directors (or, more rarely, producers, or writers) who are considered to have a distinctive, recognizable style, because they (a) repeatedly return to the same subject matter, (b) habitually address a particular psychological or moral theme, (c) employ a recurring visual and aesthetic style, or (d) demonstrate any combination of the above. In theory, an auteur’s films are identifiable regardless of their genre. The term was first applied in its cinematic sense in François Truffaut’s 1954 essay “A Certain Tendency of the French Cinema.” 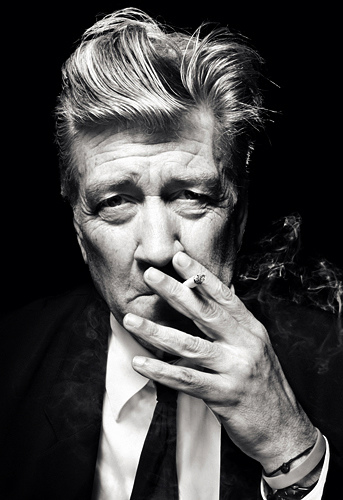 END_OF_DOCUMENT_TOKEN_TO_BE_REPLACED

I know there is at least one book on this subject and I haven’t had a chance to read it yet, but thanks to TCM showing several movies from that year, I have to agree completely. What I mean by Cinema, is Hollywood and American Cinema, because a lot of how it changed was based on things French New Wave directors had already been doing for almost ten years.

One way to see this change is by looking at the five films that were nominated for Best Picture at the Oscars that year. Four of the films are harbingers of the new Hollywood. One is old guard and because of that in addition I want to talk about another film that, although nominated for four Oscars, was not up for Best Picture. 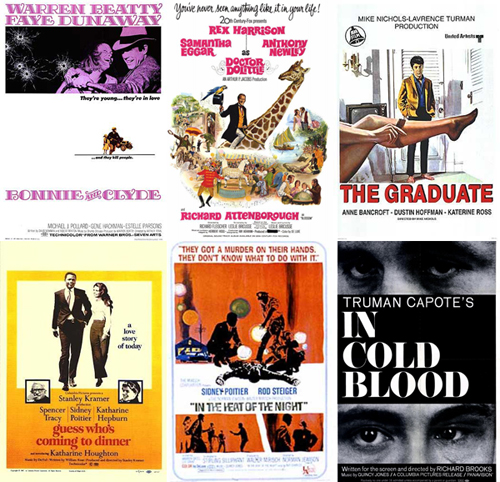 The five films up for Best Picture were Bonnie & Clyde, Doctor Dolittle, The Graduate, Guess Who’s Coming To Dinner and In The Heat of the Night. The film sixth film I’m going to discuss is In Cold Blood.