Whenever I think about the 1995 Oscar race I smile a little. It was such a strange and varied year. Up for Best Picture you had a foreign language film – Il Postino, an Oscar-bait period classic literature adaptation – Sense and Sensibility, a slice of American History – Apollo 13, a historical epic – Braveheart (it won) and a fable-esque adaptation of a beloved children’s novel – Babe. I still haven’t seen Il Postino, but I love all four of the other films on this list. Babe, however, will always have a special place in my heart. I read the book when I was in third grade and the film came out when I was in fourth grade – making it the very first film I’d ever seen wherein I’d read the book beforehand. I was so excited to see it and it did not disappoint. I even noticed things like the field where the sheep dog trials took place being named “Kingsmith Fairgrounds” –  the author of the book is named Dick King-Smith. This is truly a magical film and I don’t know a single person who’s seen it who doesn’t at least like it, if not love it. It even has a 98% Fresh rating on Rotten Tomatoes. In the end it was nominated for seven Academy Awards – Best Visual Effects (it won), Best Art Direction/Set Decoration, Best Film Editing, Best Supporting Actor – James Cromwell, Best Adapted Screenplay, Best Director – Chris Noonan and Best Picture.

This film is one of my all-time favorites. It is so perfectly executed that it is enjoyable over and over again. And although it is a “family film” it is perfectly enjoyable at any age. I love it when the Academy recognizes excellent films like this that everyone can enjoy. It also shows that you can tell a compelling story and create a lasting piece of cinema and make a film children and adults can enjoy alike – something we were reminded of by Up last year and Toy Story 3 this year.

For those of you who haven’t seen this film, first of all where have you been for the last fifteen years?! Secondly, this film tells the story of a piglet who, after being adopted by the stoic Farmer Hoggett, yearns to become a sheep-pig. There are some really great shots of sheep herding and the New Zealand countryside in this film. There’s also this beautiful faded glow to the coloring of the entire film. I was surprised to see that Andrew Lesnie’s cinematography wasn’t nominated along with everything else. It is his cinematography along with the surreal art direction/set decoration that give you a feeling that something is a little off about the film’s setting. You almost feel like you really are in a storybook.

Jams Cromwell gives an astounding performance as the stoic Farmer Hoggett. He is a man of few words, but when he does speak they are not wasted. What is so wonderful about this character is that he is the “Silent Hero,” a feature in stories and films for as long as there has been storytelling. And he plays this part well. I can’t talk about this performance without mentioning the part where he sings to a depressed Babe, who has just been told by the evil cat that his only place in life is to be eaten. Just a little bit of existentialism for ya there. But really, this scene is so uplifting and beautiful and I managed to find it on Youtube, so I can now share it with you. I dare you not smile while watching it.

What I really love about all of this is that what the pig learns, or a least what we as an audience learn, is that yes, for many a pig their purpose in life is to be eaten. This is a sad, sad truth. For Babe, however, he really is special and his purpose in life is to be a sheep-pig. And in doing so give Farmer Hoggett back his purpose in life, to  be a great trainer of sheep dogs, or in this case a sheep-pig. As a child viewer of this film a lot of the “meaning of life” talk, etc. went right over  my head. As an adult, however, the more I watch this film the more I discover that it is layered with meaning and depth. 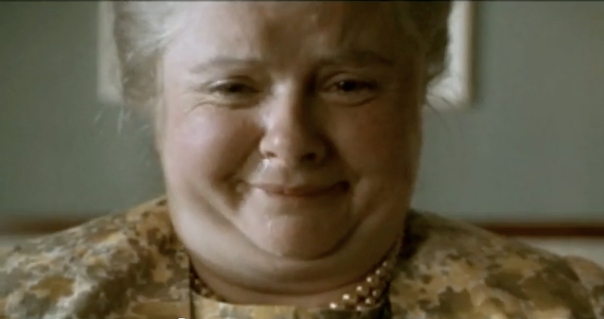 Australian actress Magda Szubanski gives a wonderful performance as Framer Hoggett’s wife Esme. She loves her husband, sure, but she’s concerned for his well-being when he begins to train the sheep-pig. As the film progresses her love and admiration for her husband shines more and more and as the film ends we see she is equally proud of her husband and his pig. 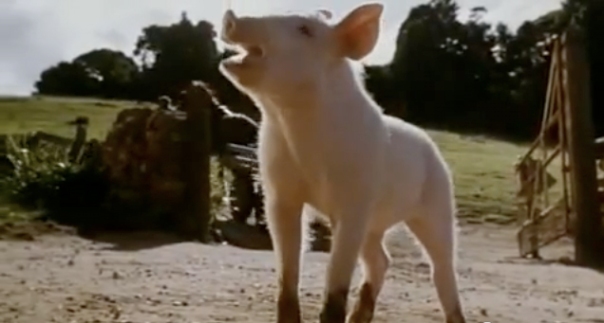 This film also contains some of the best voice performances of the last twenty years. Veteran voice actress Christine Cavanaugh (the voice of Chucky from Rugrats and the titular Dexter from Dexter’s Laboratory) voices the film’s titular hero Babe. The thing about this character is it’s a combination of visual effects, Cavanaugh’s voice and a real adorable piglet . The result of this combination is one of the sweetest, most sincere protagonists in cinema history. He’s that truly good underdog character that you root for through the entire film, who beats adversity and, like the archetypal hero of a quest myth, achieves feats greater than he ever thought he could. 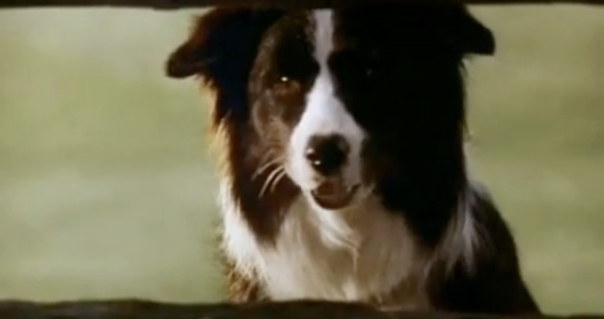 Whatever dog they cast as Fly, Babe’s surrogate mom, did a wonderful job as well. She’s his mother from the minute she sees him and she stands up for his choices, even if it means being alienated from her mate. Miriam Margolyes, who is an award-winning British stage and film actress, brings a lot of heart and depth to this voice performance. 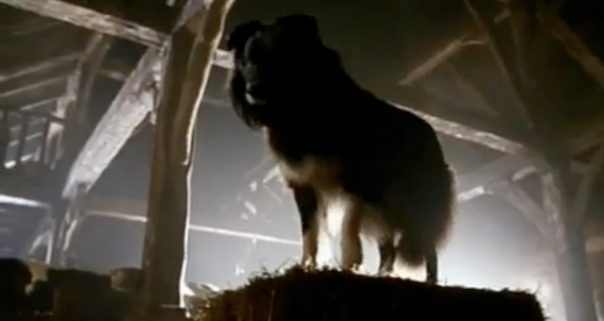 I also cannot write about this film without mentioning Hugo Weaving as Rex, the patriarch of the animals on the Hoggett’s farm. That name better ring a bell. I remember when I first saw The Matrix in theaters I kept thinking, “Why does the voice of Agent Smith sound so familiar?” and then I realized it was Rex from Babe! Really though, Weaving has such a diverse filmography, I just love it: drag queen in 1994’s The Adventures of Priscilla, Queen of the Desert, sheep dog in Babe, villaineous computer program in The Matrix trilogy, elven king in the Lord of the Rings trilogy and masked crusader in V For Vendetta. Weaving is definitely one of my favorite character actors and his voice performance in this film is one of my favorites of his. 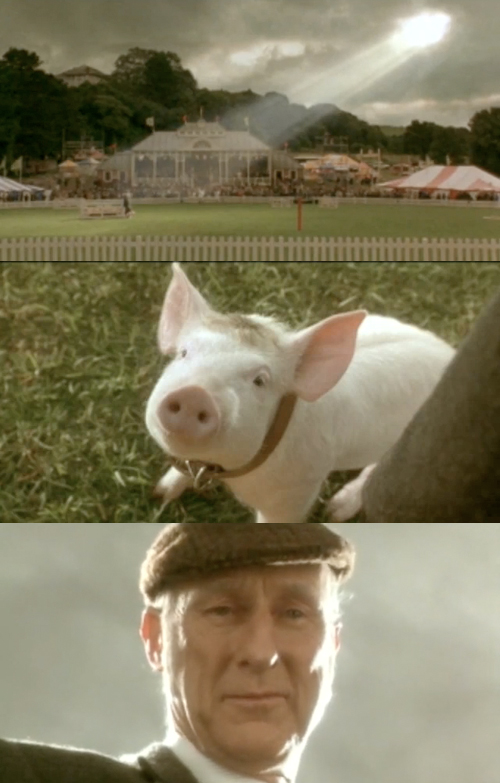 Lastly I must mention how perfect the end of this film is. If you haven’t seen it yet, as stated earlier – shame on you! – and I’m sorry for spoiling it. The visual effects, the narration, the simple camerawork, the crescendo of tension – this is pure filmmaking perfection.

Narrator: And though every single human in the stands or in the commentary boxes was at a complete loss for words, the man who in his life had uttered fewer words than any of them knew exactly what to say.
Farmer Hoggett: That’ll do, pig. That’ll do.

Those closing lines have had a huge impact on pop-culture, on par with Jerry Maguire‘s “show me the money” I would say. I can’t remember now if that phrase is in the book or not, so I’m not sure who to give credit to for writing the line, so I’ll just say that James Cromwell delivers the line perfectly and this ending definitely goes on my list of top movie endings of all-time.

So if I’ve convinced you to watch this film for the first time, rewatch it with a renewed interest or made you realize you don’t own it on DVD and really should you can purchase it here.