I don’t even remember when I first saw this movie, but it must be over 15 years ago now. I love it so much. I used to own in on VHS, yes VHS, and I’d watch it anytime I needed a pick-me-up. There’s just this wonderful energy about the entire film. It’s a lot of fun and full of heart. It was up for six Academy Awards, winning three: Best Actress – Cher (she won), Best Supporting Actress – Olympia Dukakis (she won), Best Original Screenplay – John Patrick Shanley (he won), Best Supporting Actor – Vincent Gardenia, Best Director – Norman Jewison and Best Picture. It was up against Broadcast News, Fatal Attraction, Hope and Glory and winner The Last Emperor.

I just love this film so much. One of the truly great films to come out of the 80s I think. It’s got this timeless charm to it, that certain something that makes a film a classic. A few years ago I watched Broadcast News, which was also up for Best Picture in 1987, and I thought it was a little too timely and had not aged well at all. That’s not to say that perhaps at the time it was fresh and new and well deserving of its nomination; but it is no classic. Conversely, I return to Moonstruck again and again, much like many a “classic” film from the 40s or 50s. This film is very close to its 25th anniversary mark and I think it will remain a revered film well past its 50th.

This was Cher’s second Oscar nomination, she had previously been nominated for Best Supporting Actress for the 1983 Meryl Streep starring film Silkwood. I absolutely love her in this film. If you’ve ever seen her talk on a talk show or in an interview, you can see how very different she is in real life from Loretta Castorini. That being said, you almost forget she isn’t Loretta. She has such perfect chemistry with all of her co-stars, yet whenever she’s on the screen you can’t take your eyes off of her. She is just so luminous and warm and lovely in this film.

I can’t write about Olympia Dukakis’ performance without first sharing a silly thought about her category at the Oscars. That same year she was up against Norma Aleandro, Anne Archer, Ann Sothern, Anne Ramsey. That’s right, there’s an Anne, an Anne and an Ann. I can’t help but think whoever announced the winner that year was grateful when he got to say “Olympia Dukakis” and didn’t have to deal with the chaos that would have ensued if he’d have had to say “Ann…” Maybe I’m the only one who thinks about these things. It’s what I do. Okay, back to Dukakis. She is so dryly funny in this film. She delivers some of my favorite lines in this film, including this gem: “Old man, you give those dogs another piece of my food and I’m gonna kick you ’til you’re dead!” I cannot tell you how often I say “I’ll kick you ’til your dead” and figure no one knows it’s a film reference.

Vincent Gardenia is so ridiculously melodramatic as the family patriarch Cosmo Castorini, who is going through a mid-life crisis and has a penchant for listening to  those “damn Vicki Carr record(s)” instead of going to bed. He’s one of those characters that could really have gone too over-the-top with his quirky behavior, but Gardenia plays him so subtly that he feels more like a real person than a character.

This might quite possibly be my favorite Nicolas Cage performance. I LOST MY HAND. He is so ridiculously funny in this film. What I love so much about Nicolas Cage is his intensity. No matter what the role is, he attacks it with such intense gusto. Once upon a time he was a very promising young actor, then he was a very talented established actor – hello, he won an Oscar for his performance in 1995’s Leaving Las Vegas – sadly now he’s mostly a paycheck player/joke on the internet. I haven’t seen a lot of his latest movies because they all look so bad, but I will always love him and his performance as Ronny Cammareri will always be one of my favorite performances of all time.

John Mahoney is mostly known for his role as the dad on Frasier, but in the late-80s he gave a handful of really wonderful supporting roles. One of my favorites is his turn as Perry, a womanizing college professor that Dukakis’ Rose befriends. Although he is most definitely a major jerk, Mahoney brings this subtle hint of self-assured sexuality and charm to his performance that you totally understand how he’s able to get a least a few dates out of a series of naive co-eds. 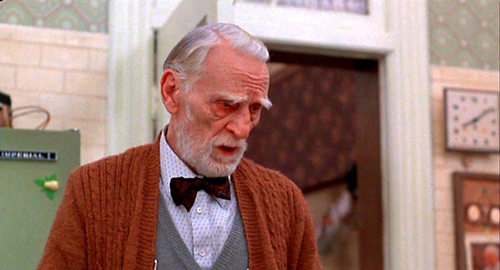 Lastly I want to talk about Feodor Chaliapin Jr. as the “Old Man” that is always feeding Rose’s food to his dogs. He wanders in and out of the film, mostly speaking Italian and talking to his dogs and/or the moon itself. He’s so wonderful throughout the film, but I love him the most in the very last scene. He’s so sincere and real. Really though, that’s why this film is so good; everyone is so sincere and real.