There is just so much to say about 1948’s The Red Shoes, that I just can’t cover it all. I saw this for the first time last week and I absolutely fell in love with it. I think it’s one of those films that has aged splendidly because it was so ahead of its time when it was first released. It’s about obsession and love and desire and artistic drive and feminism and just so many other things. It also contains some of the greatest art direction and cinematography of all time. It was nominated for five Academy Awards, winning two: Best Art Direction-Set Decoration (won), Best Scoring of a Dramatic or Comedy Picture (won), Oscar Best Film Editing, Best Writing – Motion Picture Story and Best Picture. It was up against Johnny Belinda, The Snake Pit, The Treasure of the Sierra Madre and winner Hamlet.

I think the rules were a little different back then for tech categories, because I’d’ve imagined it would have been nominated for Best Cinematography, Makeup, Visual Effects and Costume Design, yet it wasn’t. Looking at the categories that year, some of them only had two nominees. Certainly if it  were released today it would be a shoe-in for those categories (well, maybe not visual effects, but for its time it had some pretty great visual effects).

I was also surprised that Moira Shearer wasn’t nominated for her performance. It’s showy performance,  and a character that could have been played overly melodramatic, but Shearer instead imbues the character with plenty of depth and nuance. I suppose the Academy must have looked at her as a ballerina in a film, rather than as an actress, who was also a trained ballerina, playing a ballerina. You had to have the ballet skills to do the Red Shoes ballet, and a few others, featured in the film and at that time most actresses didn’t learn skills for their part (a la Natalie Portman in the upcoming Black Swan), so getting an actual ballerina was a must. But to not nominate her performance, which was much more than just her ballet skills, is just wrong. Shearer does a lot with her face, both during the ballet scenes and the rest of the film, something I always love to see in a performance. Regardless of not gaining an Academy Award nomination, her performance as Vicky Page will forever go down as one of the greatest from the Golden Age of Hollywood, if not all time.

Anton Walbrook is wonderful as Page’s domineering impresario Boris Lermontov. Apparently, the character is semi-inspired by Sergei Diaghilev, the impresario who founded the Ballets Russes. He’s egomaniacal and always claims that every thing he does is for art. It’s almost frightening when you realize that it isn’t Page that he cares about, its her talent and her ability on stage – the living art that she creates.

Also wonderful is Marius Goring as Julian Craster, who at first  is all about his composition (he writes The Ballet of Red Shoes for Page), but soon falls in love with Page, the woman, not the ballerina. This causes strife between Lermontov, who gave Craster his big break. It also brings up issues regarding feminism. After Page marries Craster, she must leave the Ballet Lermontov, which also means she cannot perform her greatest work – the Red Shoes. For her, the love of her husband is enough, or so she claims. But when the chance arrives to dance The Ballet of Red Shoes one more time, she wavers. This film is a fine example of the way the world was 60 years ago – when a woman got married she gave up her profession (you see this a lot or similar in the popular Hepburn/Tracy films). For Page in this film marriage meant that she could not live up to her potential, that she had to choose and in the end that choice has tragic consequences.

The Ballet of Red Shoes sequence in the middle of the film is one of the most beautiful fantasy scenes in cinema history. The lighting and the costumes and the set and the makeup and Shearer’s dancing all blend together in such discordant harmony. 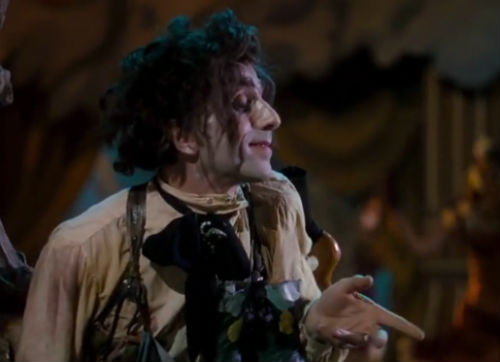 Léonide Massine, who is rather stiff during his non-ballet scenes, really shines during The Ballet of Red Shoes sequence as the villainous shoemaker, creator of the maniacal red shoes. Massine did his own choreography for this part.

Robert Helpmann, who did the main choreography for The Ballet of Red Shoes, also appears during the scene as the boyfriend who tries to help Page’s red shoe-clad ballerina escape her fate.

As an ending to this post, I present to you (in two parts), The Ballet of the Red Shoes: