I couldn’t possibly say everything I’d like to say about this film. In fact, when I started out setting up this post I found myself wanting to talk about so many aspects of this film I had to stop myself and pick my very favorite characters and scenes to focus on. It’s A Wonderful Life is one of my Top Ten Favorite Films of All-Time. I’ve watched it every year on Christmas Eve since I was a little girl. I’ve also watched it countless times throughout the years at other times as well. It’s a perfect film, that stands up to viewing after viewing after viewing. I just love it so much. It was nominated for five Academy Awards, winning none: Best Sound, Best Film Editing, Best Actor Jimmy Stewart, Best Director and Best Picture. It was up against The Chronicle History of King Henry the Fift with His Battell Fought at Agincourt in France, The Razor’s Edge, The Yearling and winner The Best Years of Our Lives.

Having recently seen The Best Years of Our Lives, I can see why it won at the time. The war had barely ended and it was a film that talked about how hard it was to readjust to civilian life – something no one was talking about. That being said, I think It’s A Wonderful Life is much more timeless than the other and vastly more approachable. Regardless of its Oscar history, the film is widely regarded as one of the greatest films ever made. It was selected to be preserved by the National Film Registry in 1990, the third year in which the Registry was operating. The American Film Institute has listed the film on several of its 100 Years…100 Movies lists: 100 Years… 100 Movies #11, 100 Years… 100 Movies (10th Anniversary Edition) – #20, 100 Years… 100 Passions #8, 100 Years… 100 Heroes and Villains: George Bailey, hero #9 / Henry F. Potter, villain #6, 100 Years… 100 Cheers #1, 10 Top 10 #3 in the genre of Fantasy. 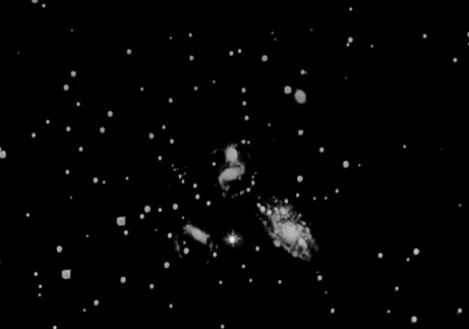 What I always loved about this film is how strange it is, even from the beginning. It starts out with the voices of people praying for George Bailey – someone we as an audience have yet to meet. The screen is a picture of the stars and we hear the voice of God and his angels discussing George Bailey. I can’t think of a single other film that has such a memorable and original opening – and keep in mind this was 1946! This must have been something else for audience back then.

Although Jimmy Stewart won his only acting Oscar for The Philadelphia Story in 1940, I think his performance as George Bailey is his finest work. He goes through every emotion imaginable as the film progresses, displaying an amazing depth and range. I wanted to use the above screenshot because I find this scene fascinating. Not just because of Stewart’s amazing performance, but also because it’s a close-up. In order to achieve a close-up like this Capra and his film editor William Hornbeck had to hand cut each frame. The execution is flawless and the scene incomparable.

It would be another eight years before Donna Reed would receive her only Oscar nomination, and win, for From Here To Eternity, but it is the film role of Mary Bailey for which Reed is perhaps best known. She is absolutely perfect throughout the film, but my favorite scene is when grownup Mary first sees grownup George at Harry Bailey’s High School graduation dance. Her face just so subtly goes from recognition to this serene face of unconditional love to this large beaming smile. It’s pure cinema.

Stewart and Reed have such great chemistry throughout the film. Their connection matures as their characters mature and the result is one of my favorite on-screen couples of all time. The explosive telephone scene is probably my favorite with the two of them. I remember watching it as a child and thinking it was one of the most passionate things I’d ever scene; I still think that to this day. 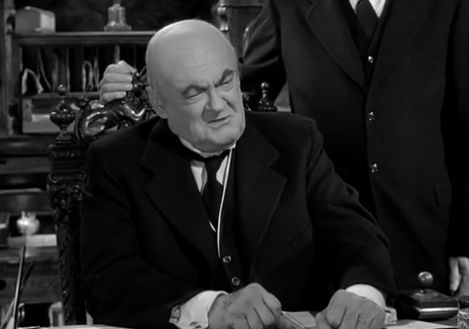 Mr. Potter. Mr. Potter is probably one of the most evil characters to ever grace the silver screen. The thing is, why is he so evil? He has very little motive, other than to just be as mean as he possibly can. Maybe that’s a flaw in the script, but I don’t think so. I think if they’d given us some back story on Mr. Potter, then we might have some compassion for him and then he wouldn’t nearly be as evil. Most of my life I thought of Lionel Barrymore as the curmudgeonly old man. But this year I’ve seen at least two of his other films – Grand Hotel and You Can’t Take It With You – where he plays jolly men. It’s made me appreciate his performance as Mr. Potter more than I ever did.

Thomas Mitchell is wonderful as George’s half-witted Uncle Billy. His mental stability gets worse and worse as the film progresses. The scenes wherein he loses the money are almost unwatchable, they’re so harsh. But they set up George for his breakdown, so they’re essential. 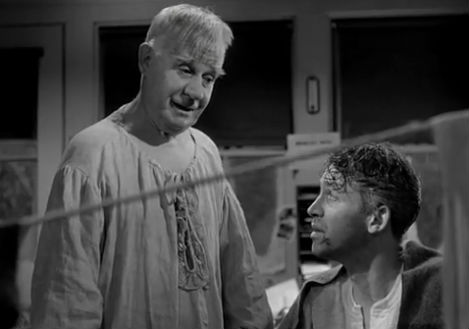 Henry Travers gives my second-favorite performance as an angel ever (just behind Cary Grant’s Dudley from The Bishop’s Wife). Clarence appears to be this bumbling fool, and maybe he is a bit, but he’s a wise fool. He show’s Stewart’s George exactly what he needs to see to realize the value of his own life.

Silent great H. B. Warner gives a stirring performance as Mr. Gower, young George Bailey’s druggist employer who recently lost his son in an influenza epidemic. The confrontation scene between young George (played by Robert J. Anderson) and Warner’s Gower is another scene that’s really hard to watch. But it’s another scene that is so essential to George Bailey’s character (as in moral qualities) and his relationship with various residents of Bedford Falls.

Gloria Grahame probably has the most vibrant part in the film (other than Frank Albertson’s Sam Wainwright) as the grownup version of Violet Bick. Grahame would go on to be one of the most prominent femme fatales of the 50s Film Noir world. She was nominated for two Academy Awards – one for 1947’s Crossfire (Best Supporting Actress) and one for 1952’s The Bad and the Beautiful (Best Supporting Actress, she won).

Of all the Bailey children, the most memorable is probably little Zuzu (and her petals), played by Karolyn Grimes. She’s just cute enough to not be annoying. She also delivers several of the film’s best lines (“Paste them!” “Teacher says, every time a bell rings an angel gets his wings.”)

Todd Karns as adult Harry Bailey delivers my favorite line in the film, “A toast to my big brother George: The richest man in town.” At this point I pretty much lose it and bawl through the rest of the film. No matter how many times I watch this film, that line still gets me. 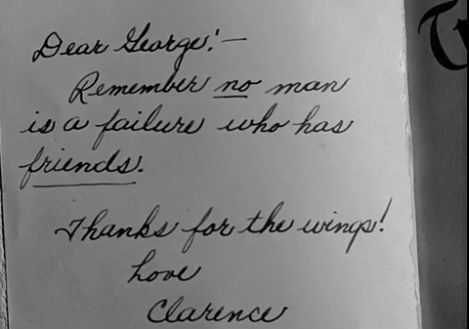 Lastly, I just wanted to end this post with this message. It’s the entire theme of the film and such a positive message.

If you’re interested in purchasing this film you can do so here (including Blu-ray).