I hadn’t seen this movie until last weekend. I have no idea why I waited so long to see it. I mean, it has a stellar cast and Clint Eastwood is a favorite of mine (as a writer and a director). It’s also based on Dennis Lehane novel (who also wrote the novels on which Shutter Island and Gone Baby Gone were based), with a screenplay written by Brian Helgeland (who shares an Oscar with Curtis Hanson for their on L.A. Confidential). Despite all of that, it took me nearly a decade to actually watch the film. Boy was it worth the wait. It’s probably one of the most tense films I’d ever seen. It was nominated for six Oscars winning two: Best Adapted Screenplay, Best Supporting Actress Marcia Gay Harden, Best Supporting Actor Tim Robbins (won), Best Actor Sean Penn (won), Best Director and Best Picture. Incidentally, this was the first time Best Actor and Best Supporting Actor had come from the same film since 1959’s Ben-Hur. The other films up for Best Picture that year were Lost in Translation, Master and Commander: The Far Side of the World, Seabiscuit and winner The Lord of the Rings: The Return of the King. 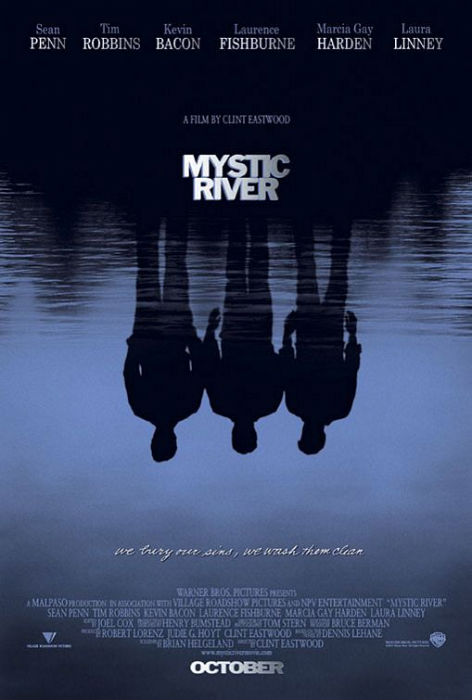 This was the year that Peter Jackson’s The Lord of the Rings: The Return of the King went 11 for 11, winning every award it was nominated for. It was an awe-inspiring sweep and I definitely feel it was well deserved, for the film and for the franchise as well. There was no way any film up for Best Picture that year was going to beat it. But I still feel it’s important to take a look at the other films that were nominated, films that in any other year would have had a strong chance at winning. Mystic River feels more in tune with the films that won Best Picture from 2006-2008. Maybe it was heralding the mini-change to come.

Sean Penn gives an equal parts explosive equal parts subtly harrowing performance as bereaved father Jimmy, whose daughter is murdered early on in the film. I can’t really decided which scenes I liked more of his, the explosive ones – like when he arrives at the crimes scene and is held back by cops as he shouts “Is that my daughter?!” over and over; or the little scenes like when he’s discussing the particulars of his daughters funeral arrangements. I can’t remember another film that actually showed that part of the bereaved’s life. How do get your head together enough to make decisions about coffins and obituaries when your 19-year-old daughter has just been murdered? I think it’s these scenes that got me the most. Penn received his fourth of five Best Actor Academy Award nominations for his role in this film, and his first of two wins. His other nominations were for 1995’s Dead Man Walking (wherein he was directed by his Mystic River co-star Tim Robbins),  1999’s Sweet and Lowdown, 2001’s I Am Sam and 2008’s Milk (won).

Tim Robbins received his first and only acting nomination for his performance as the troubled Dave (he was nominated for Best Director for 1995’s Dead Man Walking; also should have received a nomination along with Morgan Freeman (who did receive one) for 1994’s The Shawshank Redemption). Robbins is definitely the best thing in this film (and it is filled with best things). He completely disappears into this role and leaves you the viewer with as much doubt about his innocence as he does his wife (I’m not going to spoil it for you if you haven’t seen it).

Speaking of his wife, my other favorite thing in the film was Marcia Gay Harden as Dave’s wife Celeste. Harden was nominated for Best Supporting Actress for her work, a prize she won for 2000’s Pollock. Renée Zellweger won the award in 2003 for her work in Cold Mountain. I did not like that film and I remember thinking at the time that there was no way that was the best supporting performance of the year. After seeing Harden in this film I now know I was right and if it were up to me I would take Zellweger’s Oscar away and give it to Harden in a heartbeat. There’s just something so sublime about her tense and fragile performance in this film. She’s a fine actress, perhaps one of the best working in Hollywood today, and she is most definitely at the height of her craft in this film.

I have so much love for Kevin Bacon, ever since I saw Tremors when I was a young child. He’s been in five Best Picture nominees (this film, Frost/Nixon, Apollo 13, A Few Good Men and JFK) and he always gives stellar supporting performances, yet he never quite manages to get himself a nomination. The same hold true for his performance as Sean in this film. He was friends with Penn’s Jimmy and Robbins’s Dave when they were kids, but he was the only one who managed to get out of the neighbor, go to college, etc. Despite that, he is just as affected by what happened to them as children, as his two friends. Well, as affected as Jimmy anyway. Dave, who was abducted in front of them by child molesters, was clearly the most changed by the experience. It’s clear to me that Sean went into law enforcement as a sort of penance for not being able to help Dave when they were kids. It’s one of Bacon’s more heartfelt performances and a favorite for sure.

Laurence Fishburne was great as Sean’s partner Whitey. He plays your standard hard-nosed detective, but elevated slightly be Fishburne’s expertise. The actor, who made his debut in Francis Ford Coppola’s Apocalypse Now in 1979,  was nominated for Best Actor in 1993’s What’s Love Got To Do With It.

Laura Linney doesn’t have much to do for most of the film as Sean Penn’s wife Annabeth (she’s his murdered daughter’s step-mother), but in the last five minutes of the film she shows us that she is more than aware of Jimmy’s past violence. She’s clearly as off as he is, and just as good at hiding it. She does a fabulous job with her Boston accent, which makes the scene all the more creepy. At least, it does to me.

Lastly, I wanted to talk about Tom Guiry, who plays Brendan the (secret) fiance of the murdered girl. Guiry made is feature film debut in 1993’s The Sandlot as Scotty Smalls. When I discovered that this was the same actor my mind was completely blown. He was probably the least memorable actor from that film, but here he more than hold his own with Penn, Bacon and Fishburne, with whom he shares several scenes. However, it’s the scenes he has on his own, where he’s trying to deal with his grief that he shines the brightest. Again, he gives a fabulous performance in a film filled with fabulous performances.