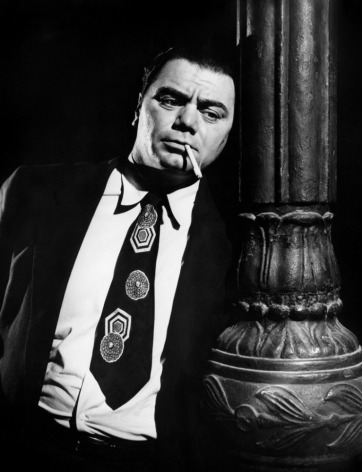 Turner Classic Movies will remember the life and career of Academy Award-winning actor Ernest Borgnine with a 24-hour marathon of his films on Thursday, July 26. Borgnine, who passed away Sunday at the age of 95, was a dear friend to the TCM community through his appearances at the TCM Classic Film Festival, on the TCM Classic Cruise and during TCM’s annual Road to Hollywood tour.
TCM’s 10-film memorial tribute is set to begin at 6 a.m. (ET) with The Catered Affair (1956). The daytime lineup will include such films as Torpedo Run (1958),Ice Station Zebra (1968) and The Dirty Dozen (1967). Primetime will kick off with an encore presentation of TCM’s 2009 special Private Screenings: Ernest Borgnine, an hour-long, in-depth interview with the actor and TCM host Robert Osborne. It will be followed by Borgnine’s Oscar-winning performance inMarty (1955), as well as memorable roles in films like From Here to Eternity (1953), The Wild Bunch (1969) and Bad Day at Black Rock (1955).

“Ernest Borgnine was a great friend of ours here at TCM, an actor we all greatly admired because of his talent and ability to play everything from nasty tough guys to likeable fathers to comical sailors,” said Osborne. “We saw firsthand how much he loved life, loved being an actor and enjoyed meeting his fans when he joined us at our TCM Classic Film Festival, TCM Classic Cruise and Road to Hollywood events. He was a joy to be around. Thank heavens for film. Ernie may have left us physically, but we’ll have his talent and film image with us forever.”

The following is a complete schedule of TCM’s Thursday, July 26, tribute to Ernest Borgnine (all times Eastern):