Like Stanley Donen’s Charade, Witness For The Prosecution is often misremembered as an Alfred Hitchcock films. While the subject matter on paper sounds like a Hitchcock film, the resulting film is most definitely a Billy Wilder film. Since the film came at the end of the Film Noir era I thought it would be a perfect way to end Noirvember. Witness For the Prosecution is not a full-on noir like Wilder’s Sunset Blvd., Double Indemnity or Ace in the Hole, but it definitely borrows from those films. It’s got a wonderful twist ending that I, for once, will not spoil. After the film ends there’s a disclaimer that runs during the credits. A voice-over announces:

“The management of this theatre suggests that for the greater entertainment of your friends who have not yet seen the picture, you will not divulge, to anyone, the secret of the ending ofWitness for the Prosecution.”

So I’ll follow the producer’s wishes. Currently, this film is available on instant Netflix, so you can watch it right away if you want!. Witness For The Prosecution was nominated for five Academy Award, though it didn’t win any: Best Sound, Best Film Editing, Best Supporting Actress Elsa Lanchester, Best Actor Charles Laughton, Best Director and Best Picture. The other films nominated for Best Picture were Sayonara, Peyton Place, 12 Angry Men and winner The Bridge on the River Kwai.

I’m sure you are all familiar with Billy Wilder, but I thought I would throw out a handful of stats about the writer/director. He is one of only five people to have won Academy Awards as producer, director, and writer for the same film (The Apartment). He was nominated for twenty-one Academy Awards (12 for writing, eight for directing and once for producing). He also directed eight actors to Oscar nominated performances (William Holden and Jack Lemmon received two each under his direction; Holden won for Stalag 17; Ray Milland also won for The Lost Weekend and Walter Matthau won Best Supporting Actor for The Fortune Cookie) and six actress to Oscar nominated performances (Shirley MacLaine was nominated twice for her work with Wilder; none of the actresses won). Witness For The Prosecution comes from a short story by mystery writer Agatha Christie, who happens to be one of my favorite writers ever. I’ve never read this particular short, but it definitely has her wry and often morbid sense of humor to it.

Charles Laughton is probably best remembered for his stunning turn in William Dieterle’s 1939 adaptation of The Hunchback of Notre Dame. He was nominated for three Academy Awards, winning once: The Private Life of Henry VIII (1933, won), Mutiny on the Bounty (1935) and Witness for the Prosecution (1957). He directed one film, the noir classic The Night of the Hunter, which at the time was a failure but is now considered not only one of the best films of the film noir era, but also one of the greatest film ever made, period. I love him in this film. He is both feisty and curmudgeonly and he also plays a character with a great love of the law. This is the kind of role that actors love to play when they are older and Laughton clearly had a ball with it.

Charles Laughton and Elsa Lanchester were married in 1929 and the two remained married until his death in 1962. They starred in several films together and I really love them in this film. They have such amazing chemistry. It’s almost like you aren’t watching actors; just two people with a deep connection. Another of my favorite films in which they both appear is 1948’s The Big Clock.

Despite making his film debut in 1932, Tyrone Power’s first starring role was in 1936’s Lloyd’s of London directed by Henry King. He later starred in King’s In Old Chicago and Alexander’s Ragtime Band. I highly recommend him in the noir classic Nightmare Alley. Although Power was never nominated for an Oscar, he is definitely one of the most dynamic actors of his generation. He often brings a smugness to his characters that would be off-putting, but he is just so damn attractive and charming, too, that it’s hard to hate him. He gives one of his most complex performances as the defendant in this film. 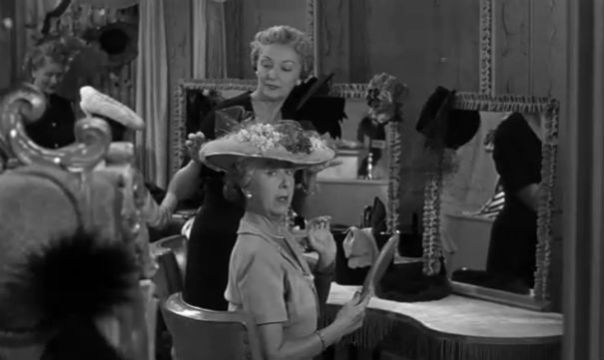 Power’s character is accused of killing an elderly woman whom he had manipulated (romanced?) into making him the sole beneficiary of her will. Norma Varden is wonderful in the few scenes in which she appears. A consummate character actress, Varden appeared in over 150 films in a forty-year career.

Which brings us to Marlene Dietrich. Dietrich started her career in the silent era and rose to prominence after 1930’s The Blue Angel, her first of seven performances in the films of Josef Von Sternberg, including Best Picture nominee Shanghai Express, and Morocco for which she received her only nomination for Best Actress. Dietrich is most definitely one of the most striking women to ever grace the silver screen. Just look at her cheekbones! She had an allure that was all her own. She’s great in this film as Power’s wife – maybe? – whose desperation to save his life has devastating consequences, but I won’t spoil those. Like the rest of her co-stars, Dietrich clearly had a ball with this rich, intriguing character and the result is one the  most layered, intense performances of her career. It’s pretty shocking that she wasn’t up for the Oscar for it.

Oh how I love Elsa Lancester. She is probably best known as the Bride of Frankenstein.  Lanchester received a Best Supporting Actress Oscar nomination for her nutty performance in this film. She had previously been nominated in the same category for 1949’s Come to the Stable. Lanchester is one of those actresses that pops up in many, many films, but most of the time you probably don’t know what her name is. I recommend you look her up and see how many films you’ve seen with her. She’s always a hoot.

I have to talk a little bit about Una O’Connor, another consummate character actress, who gives a gripping performance as the neighbor of the murdered woman. O’Connor appeared in over 80 films in a thirty career. Again, she is one of those actresses of whom you have seen A LOT of her films, you just probably never knew her name.

Don’t forget to check out our 2012 Holiday Gift Guide!