When I first netflixed this film I watched it three times before sending it back – twice back-to-back and then a third time the next morning. I was completely blown away with how wonderful it was, from start to finish. I know a lot of people consider Some Like It Hot to be Billy Wilder’s best film and as much as I like that one, I have to disagree and go with Sunset Blvd. It is a masterpiece in every sense of the word. The film was nominated for 11 Academy Awards, winning three for black-and-white Art Direction, Best Writing – story and screenplay and Best Score. For Best Picture it was up against Father of the Bride, King Solomon’s Mines, Born Yesterday and lost to All About Eve. All About Eve wound up winning six Oscars in all. Another tight race that year was Best Actress, Gloria Swanson in Sunset Blvd. was up against Bette Davis and Anne Baxter in All About Eve, but all three lost to Judy Holliday in Born Yesterday. Having watched all three of those films within a few days of each other it is my belief that, although Holliday’s performance was stunning, the other three women spilt the vote so severely that Holliday won by default. I’ll say it up front, I enjoyed All About Eve, but I deeply love Sunset Blvd. and think it is by and far the greater of the two films.

Beware: there be spoilers after the cut.

I have so much love for this movie I’ve had anxiety about writing this post all week. This movie is so far ahead of its time in so many ways, I think that has a lot do to with why modern audiences still love it to this day. I also think it’s a lot more cynical and candid about how harsh the industry can be than All About Eve, which is more about how cut-throat actors can be, that perhaps it made the Academy too uneasy for it to win the top prize, regardless of its quality.

I would also like to say that after having watched this film I feel completely ripped off by American Beauty. When I first saw that film I thought its opening  was so original, and then I watched this film and discovered that it had all been done before, 50 years before in fact. Sunset Blvd. begins with William Holden’s dead body floating in a pool, Holden narrating about his own murder. What I love about this scene is, even though it’s insanely gruesome, there’s wry humor in the narration:

Gillis: The poor dope. He always wanted a pool. Well, in the end he got himself a pool — only the price turned out to be a little high. 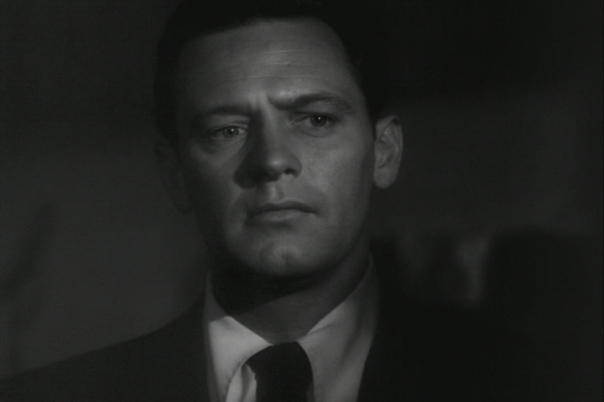 Although Holden was known throughout the 40s as Hollywood’s Golden Boy, his turn in Sunset Blvd. earned him his first Oscar nomination, ultimately he lost to José Ferrer in Cyrano de Bergerac. He would win in 1954 for Stalag 17, also directed by Wilder. He was great in his Oscar-winning performance for sure, but I think his turn in this film is his best. It’s one of his most subtle performances, but also one of his most layered. A lot of what makes his turn as failed screenwriter Joe Gillis so wonderful is these little things he does with his face, mostly in reaction to Gloria Swanson’s Norma Desmond, whose performance is often the only one discussed in regards to this film. That is completely unfair, because although Swanson’s performance is heart of the film, everyone in the film is equally spot on.

Much like the character she plays in the film, Gloria Swanson was a huge star in the early days of Hollywood. She was nominated for back-to-back Oscars in 1928 and 1929. She made over 50 films from 1914 to 1934 then didn’t make another film until 1941 then disappeared again until her marvelous turn as Norma Desmond in this film, for which she received her third Oscar nomination. Oddly enough, the role was rejected by Mae West, offered to Mary Pickford, but she demanded too much project control and also turned down by Pola Negri, before being accepted by Gloria Swanson. It’s hard, if not impossible, to picture anyone but Swanson playing this role. Her performance is widely considered one of the greatest screen performances of all time and Norma is considered one of the greatest characters in cinema history. She attacks this role with gusto and never lets up until the final frame.

Gillis: You’re Norma Desmond. You used to be in pictures. You used to be big.
Norma: I am big. It’s the pictures that got small.
Gillis: I knew there was something wrong with them.

What makes this dialogue so poignant is not just Norma’s famous line, but Gillis’ response. Holden’s delivery of the line is so honest and subtle, it’s a perfect jibe at the state of Hollywood at the time.

I love how Wilder used pieces of Swanson’s past to create Norma’s past. Norma Desmond’s house is filled with old pictures, that are actually from Swanson’s days as silent film star, Norma and Gillis even watch one of Swanson’s actual films. It’s the touches like this that make the film feel so real. 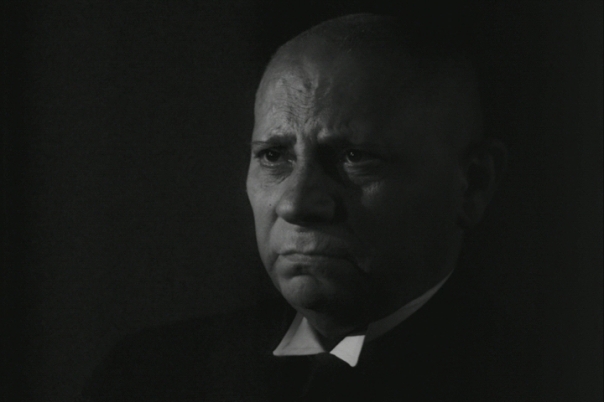 In fact, Norma’s servant is played by Erich Von Stroheim, who had been a silent film director and had worked with Swanson extensively. Sunset Blvd. marked Stroheim’s only Oscar nomination, although he lost to George Sanders in All About Eve. Stroheim’s performance as Max Von Mayerling is one of the most heartbreaking aspects of the film. He’s a broken man, whose sole purpose in life is to keep up Norma’s illusions of grandeur. He acts out of both guilt and undying love for the forgotten screen siren.

The film continues its commentary on Hollywood’s ability to completely love and then utterly forget its own stars with Norma’s bridge club, consisting of more silent film stars. Although they go unnamed, Buster Keaton, Anna Q. Nilsson and H.B. Warner all play themselves. 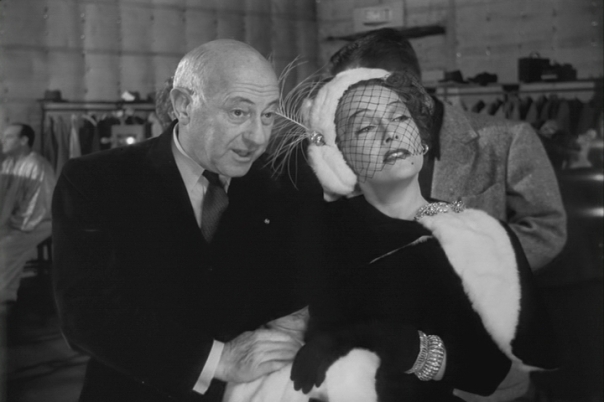 Later in the film Cecil B. DeMille makes a cameo as himself. Apparently DeMille and Swanson were friends in real life and had been for years. He used to call her “Young Fella” and this pet name made it into the film.

Nancy Olson’s Betty Schaefer is the “straight man” in the film and her scenes with Holden are particularly wonderful. Betty “comes from a picture family,” her grandparents and parents having all worked in the industry. She’s everything Gillis wishes he could be when it comes to being a screenwriter. She also represents the innocence and hope that he had when he first came to Hollywood. As the film ends, however, Betty is introduced to the ugly side of Hollywood and ultimately her character serves as another way for Wilder to demonstrate that even if you think you know how dark the Hollywood machine is, it can get darker. 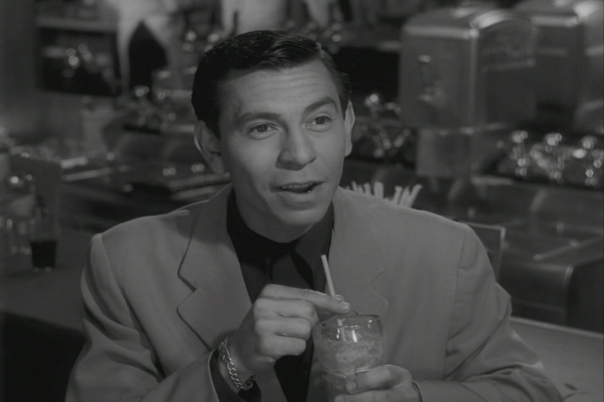 Jack Webb appeared in this film a year before he gained iconic status on Television as Sgt. Joe Friday in Dragnet. His character, much like Olson’s Betty, represents all that is good about Hollywood.

The final scene of the film is one of the most haunting things I have ever seen. The eerie score works perfectly with the dream-like sequence as Swanson floats down her staircase and delivers yet another of the most iconic lines in all of film history:

I can’t go on with the scene. I’m too happy. Do you mind, Mr. DeMille, if I say a few words? Thank you. I just want to tell you how happy I am to be back in the studio making a picture again. You don’t know how much I’ve missed all of you. And I promise you I’ll never desert you again, because after Salome we’ll make another picture, and another and another. You see, this is my life. It always will be. There’s nothing else – just us and the cameras and those wonderful people out there in the dark. All right, Mr. DeMille, I’m ready for my closeup.

Like Some Like It Hot, this film has one of the greatest closing lines of all time. It’s hard to describe how perfect this ending is if you’ve never seen the film. Let’s just say it will stick with you long after it fades to black.

If you’re interested in buying Sunset Blvd. you can do so here.