I saw this one for the first time a few years back when Michael Fassbender was in all the movies and I was doing some catch up (still haven’t seen all his films, though). This one really struck a chord with me because it’s a nice riff on the Angry Young Man/Kitchen Sink/British New Wave films of the late-50s/early-60s, but with a female protagonist and a female filmmaker, which gives a whole other perspective to the angst of the youth of this socioeconomic class. Beware, there be spoilers after the cut.

One thing I really love about the film is its aspect ratio, which adds to the film’s claustrophobic nature. It also makes you feel like you’re following just one person and her view of the world. The film’s protagonist Mia (Katie Jarvis) lives in the projects in East London with her sister and single mother – both of whom she doesn’t care too much for. She spends most of her time alone, practicing hip-hop dancing. One day her mother brings home a new boyfriend – Connor (Michael Fassbender). The viewer can already tell things are not right with this man, as he walks around Mia’s mother’s flat shirtless – regardless of the fact that there are two young girls around (or maybe because of it). He’s charming and Irish, but Mia maintains an outward indifference. Arnold’s camera, on the otherhand, is going full-on female gaze, taking in all the beauty that is Fassbender’s languid body.

You even get a little glimpse of Mia’s female gaze as well, taking in her mother’s boyfriend in all his male glory. She’s old enough to find a man attractive, but young enough to still want a father figure. These conflicting feelings don’t help her already confused adolescence.

Movies like this are why I wish more female directors would have a strong perspective and would bring this gaze to the forefront. Women oggle men as much as men oggle women, we just tend to be more sly about it. Arnold’s camera is definitely oggling Fassbender in the film. Her casting is spot on, too, as he is extremely charming and good-looking, but his character is just ever so sleazy. You can imagine a lonely woman (and her teenager daughter), falling under spell despite the warning signs that all is not right.

Connor takes Mia and her family on a fishing trip in order win them over. This trip includes one of the goofiest dances you will ever see. Here he’s in full on Dad mode and Mia takes the bait; acting like a kid again, interacting with him like you would expect a father and daughter would. For a brief moment, you see a happiness to Mia that is not common.

When Mia decides she wants to audition for a hip hop dance competition, Connor lends her a videocamera so she can make an audition tape. Again in this scene Arnold utilizes the female gaze, both with her camera and with Mia’s use of Connor’s camera. It’s an interesting moment where Mia feels powerful and Connor, caught by her gaze, is for once powerless. I wanted to include this shot because Mia almost breaks the forth wall here, but not quite. This shows us that while we are inside Mia’s story, she doesn’t share everything with us and we can’t ever see complete eye-to-eye. A few days after accidentally Mia catches her mother and Connor having sex, the two adults get shitfaced, her mother passes out and Connor takes advantage of Mia. This is a very polite way of saying Connor rapes her. It’s a delicate scene and Mia’s not sure what she wants, but she’s also not in any shape mentally to give consent either. This is how Connor reestablishes his power over her.

After the incident, Connor leaves never to return.  Mia tracks him down, only to discover that he has a family of his own – a wife and young daughter. Mia breaks into his home and in a fit of rage urinates on one of his rugs (that’s an interesting retaliation and probably deserves more analysis than I’m capable of at the moment). 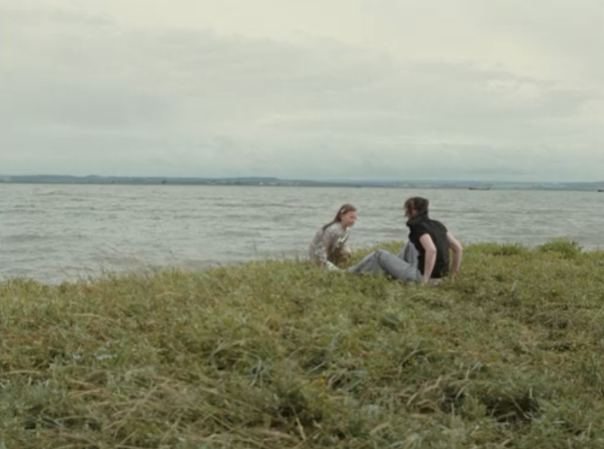 This leads to one of the hardest parts of the film. Mia kidnaps his daughter, unsure what she wants to do with her. Eventually, due to the girl’s struggle and protests, Mia pushes her into a river. It’s in this moment we see that Mia really is still a child. Her life has caused her to grow up too fast, but really it’s Conner’s young daughter she envies the most. She wants to be a young,  carefree girl again – if she ever was. After Mia returns the girl home, she has one last confrontation with Connor. There are no words – he slaps her and leaves her, hurt, on the ground. Again we see unbalanced power. Connor abused Mia – twice now – and there’s nothing she can do about it about. She put a child in danger, but she herself is still a child. There’s really no one in this movie who behaves responsibly.

There’s a whole other aspect of the film – with travellers, a boy named named Billy and an ill horse – that I didn’t even try to write about just now. There’s a lot of layers and symbolism in this film and it’s one that deserves multiple viewings to take it all in. As the film ties all its pieces together, Mia finally goes to her audition – only to discover it is clearly for erotic dancers. She arrives in a sweats. Again, we see that she is really still a child. Shes’s not quite ready for the world of adults that she finds herself thrust into, but unable to go back to anything else.