I was fortunate enough to speak with Melanie Wise, the founder of the Artemis Women in Action Film Festival yesterday, and what perfect timing since today is International Women’s Day! After the cut, please find the interview. I hope you enjoy and if you can spare even $5 please donate to the festival’s IndieGoGo campaign! 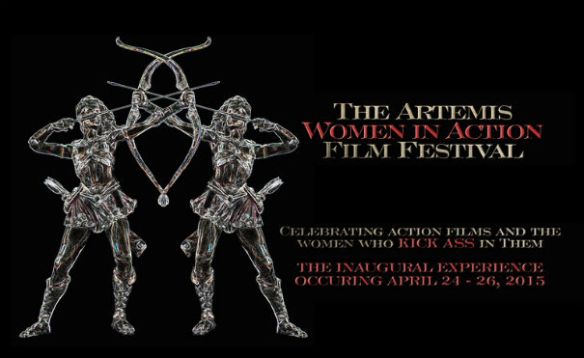 What brought you to film?

Melanie Wise: When I was a kid, at a very young age I knew I wanted to come to California and be in entertainment.

Where were you from originally?

Melanie Wise: I was born in Detroit and raised in south Alabama in a town with 500 people that had a caution light, not even a stop light. So, I came to California right after I graduated and I spent several years modeling, several years painting and then I started going after auditions and I just hit a wall because I couldn’t sell “victim” and my height was a factor because I’m taller than a lot of the guys, so probably in my late-twenties I started producing my own content. We produced three full-length features, several shorts and a lot of other stuff to keep the business going. I’ve always loved action films, so that was kind of the impetus for starting the festival. We have an entire production company called Artemis Productions and all of our content is very female-centric, action-type stuff.

There really isn’t much mainstream action that is female-centric.

Melanie Wise: When we opened submissions we thought we would get laughed out of the park because we had no idea how much content we would get, but we’re right around 200 submissions right now. We have really amazing content. Paring it down for a festival is going to be really rough. We have amazing submissions. I was floored. That’s why we’re doing crowd-funding, because the thing that we started with is not what we were winding up with and the more fanfare you can bring to a festival, the more it puts the message out there. If you look at box office numbers in every media, it’s the women that are selling and this last action season was supposedly disappointing, but the one bright spot was the women-led films outsold Tom Cruise.

Box Office numbers show that women are a great return on investment time and again.

Melanie Wise: That’s another reason we wanted tho festival. Until voices get loud about proving that this is a very viable genre, it’s going to be ignored. It think, though, now that studios are announcing female-led franchises, the tides are starting to change. But I think the tides are starting to change because of dollar signs, not because it’s the right thing to do.

That’s why one of my big initiatives this year was to point out all of the films by women that open each week, because box office is a number film-goers can affect. This year alone, I’ve already seen 9 new releases directed by women.

Melanie Wise: How many of those were indies?

Most of them, because living in L.A. I have access. Independent film is an interesting landscape because you have the larger (but still small) budget ones that manage to get distribution, and then you have these micro-budget ones that can be just as good, but getting them out there is a challenge.

Melanie Wise: That’s one of the reasons wise things like film festivals are so important. And also with these digital platforms we have now, they have an amazing latitude to actually help people get their stuff out there.

I try to seek out indie films as often as I can. Occasionally, I’ll see a studio film, but most of what is coming out of the studios is crap and I don’t want to spend $12 to see it! And then you see how much many these crap films make and it’s baffling.

Melanie Wise: You walk into any grocery store, on any given day and there’s five types of apples that are sitting there, while mother nature makes about 50,000 varieties of apples. It’s not about what’s good, it’s about what’s available and what studios are going to push. Because the studios have such deep pockets, indie films just can’t compete with their marketing.

It’s interesting if you look at per theater average. Obvious Child opened in about three or four theaters in NYC and LA last year, but in its first weekend it had the largest per-theater average. But no one was talking about that!

Melanie Wise: That’s a convenient thing to ignore. It’s like when Aeon Flux was released, not a very good movie, but they used it to say that women were box office poison in action leads. Which was not the case. They took a crappy movie and put it out there and then they’re like “women in action is box office poison.” What if they’d released a decent movie? What would the result have been?

A lot of women find working within the Hollywood system difficult because of the inherent sexism.

Melanie Wise: It’s funny because I’ve done a lot of jobs that were more male-centric and I never really felt like sex was an issue in terms of the jobs. I grew up pitching hay bales and shoveling horse shit, you know? I’ve worked in satellite communications, I trained people in fitness, strength training, bartended and I never felt like my sex was an issue until I got into this industry.

There’s a lot of stories about the sexism in Tech that are coming out and it’s like we need the same sort of whistleblowing going on in the film industry. There’s only a handful of women who are very vocal about how messed up it is and then they can’t get work anymore.

Melanie Wise: Exactly. Women are still expected to be weaker and I think one of the reasons people are slow to accept the heroic female character is because, “oh, women can’t do that.” But, actually they can! Some of the shit women can do now, and have always done throughout time, is astounding. Women have gone to war for thousands of years. If you ever really want to see a woman get physically active, threaten her child. Why we still have this hardcore, dug in belief that women are the weaker sex blows my mind.

It’s like how so much of the world used to be matriarchal and then it shifted, as civilization moved into the cities and it became very patriarchal and then this idea of women being so weak became so prevalent and now we’re stuck with this relative new belief.

Melanie Wise: It’s like in the 40s when all the men went off to war, what did all the women do? They went to work! They did men’s jobs, and then the men came back and then women had to go back to housekeeping. But I think now we’re sitting at a very amazing time. If you look at all the groups, of every walk of life, they’re all now pushing some kind of women’s empowerment movement.

I think the internet has really helped unite people.

Have you seen the new Film Director Barbie? My mom just got them for me and I think they’re great. They say they’re ages 3+, so probably thousands of girls ages 3 to 10 will get one this year. So in 10 to 15 years, how many more women will be determined to make films because they had that Barbie as a kid?

Melanie Wise: That’s what it takes. 4% of our crowd-funding is actually going to Girls On The Run L.A.. They take girls ages 8 to 14 and teach them how to run 5K races. One of the things I’ve learned from training people, and specially women, is that a lot of women have an idea of how strong they think they are, or how weak they think they are and in 2 or 3 months, you can pretty obliterate that paradigm. The really cool thing is that once you start breaking down the barrier of what a woman thinks she can do on a physical level, a lot of other barriers get broken. I think there is a component of physical activity that teachers girls a level of self-esteem that they won’t learn anywhere else.

One of the most influential films on me from my childhood was G.I. Jane

Melanie Wise: I love that movie.

Demi Moore was so physically badass in that movie, but she was also so mentally a badass. Whenever someone was trying to tell her she couldn’t do something, she had such sound logic for doing what she wanted to do and she expressed it so passionately.

Melanie Wise: It’s such a great film. The first two women who really inspired me like that were Sigourney Weaver and Linda Hamilton. I was absolutely floored when Hamilton actually said yes to receiving our first Action Icon Award. I’m not a fan of violence, per se, but women in action, I love.

After this first festival, do you hope to make it annual?

Melanie Wise: Yes. There’s more there that we will be announcing soon. We want to see what people want and whether they want this. If we can support an annual event, it’s not only something that’s needed, but could be really cool. We could start culling the next unknown action filmmakers there. We would love to be known as the mecca of strong women films. I think strong women is what’s going shape the film landscape in the next ten years.

It’s a very exciting time for women in film.

Melanie Wise: And it’s been a long time coming.

The inaugural Artemis Women In Action Film Festival will be held in Los Angeles from April 24 – 26, 2015. The IndieGoGo campaign run until March 19th.