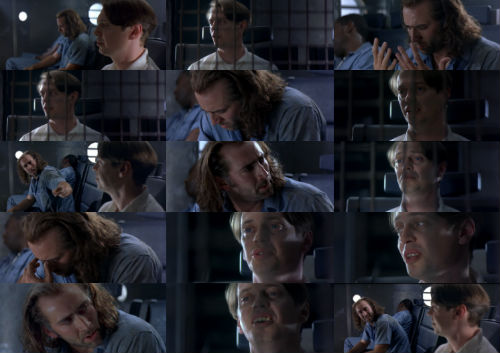 Garland Greene: Two went down, one came up.
Cameron Poe: Wasn’t my fault.
Garland Greene: Well, you don’t have to tell me. Most murders are crimes of necessity rather than desire. But the great ones, Dahmer, Gacy, Bundy. . .they did it because it excited them.
Cameron Poe: Don’t you. . .I got nothing in common with them, with you. Don’t you talk to me! They were insane.
Garland Greene: Now you’re talking semantics. What if I told you insane was working 50 hours a week in some office for 50 years at the end of which they tell you to piss off, ending up in some retirement village hoping to die before suffering the indignity of trying to make it to the toilet on time? Wouldn’t you consider that to be insane?
Cameron Poe: Murdering 30 people, semantics or not, is insane!
Garland Greene: One girl. . .I drove through three states wearing her head as a hat.
Cameron Poe: It’s my daughter’s birthday today. So please feel free not to share everything with me.