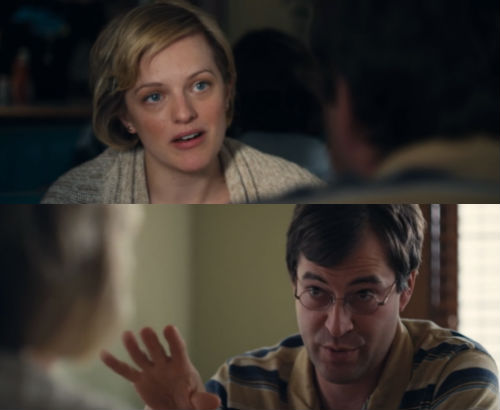 Sophie: This is something that we’ve been talking about in therapy. Exploring new options, creating a new relationship Not going back to the past and re-creating old things that happened but starting with new things.
Ethan: Yeah. Point taken.
Sophie: I know that this is sort of extreme.
Ethan: I didn’t imagine this sort of new thing.
Sophie: Absolutely, but. . .
Ethan: I imagined like horseback riding with a little satchel of wine, you know? Not exploring other dimensions in some weird version of Who’s Afraid of Virginia Woolf?

I actually managed to watch the equivalent of a movie a day this month! (That’s probably because I failed to read a book a week). I also started watching more TV shows. I watched all of Being Mary Jane and You’re The Worst, finished up The Leftovers, continued watching The Knick and Outlander and started watching the last season of Boardwalk Empire. I also watched the pilots for Gotham (well, two episodes), black-ish, and How To Get Away With Murder. Of those three, I’ll probably only continue watching black-ish. Movie-wise, I watched a lot of pre-codes thanks to TCM, and a bunch of films directed by ladies (awww yeahhh). As always, after the cut are all the movies I watched and my five favorites.