← Movie Quote of the Day – Hable con ella (Talk To Her), 2002 (dir. Pedro Almodóvar)
It’s The End of Summer and the Beginning of Fall Film Festivals →

I hadn’t seen this movie until about a month or so ago, when I discovered it was on Instant Netflix. I watched it pretty late at night, and I must say that was probably not the best idea. It is a brilliant masterpiece of a film, but it is has such heavy subject matter, it made for a pretty fretful night of sleep. I’ve watched several adaptations of Tennessee Williams plays, and I definitely think this is the best of the lot. I also think it is Marlon Brando’s best work (although, I have not seen but pieces of The Godfather; please refrain from stoning me, I swear I’ll remedy that soon). It was nominated for a whopping 12 Academy Awards, winning four and is one of a handful of films to be nominated in all four of the acting categories. It was nominated for: Best B&W Cinematography, Best B&W Costume Design, Best Score, Best Sound, Best Writing, Screenplay (this was back when their were three writing categories), Best Actor Marlon Brando, Best Director Elia Kazan and Best Picture. It won the following categories: Best B&W Art Direction, Best Actress Vivien Leigh, Best Supporting Actress Kim Hunter and Best Supporting Actor Karl Malden. For Best Picture it was up against A Place In The Sun, Decision Before Dawn, Quo Vadis, and winner An American In Paris. I’ve seen two of those films and I would most definitely say the Academy made the wrong decision here. It was really another case of flashy musical winning over gritty, masterful drama. 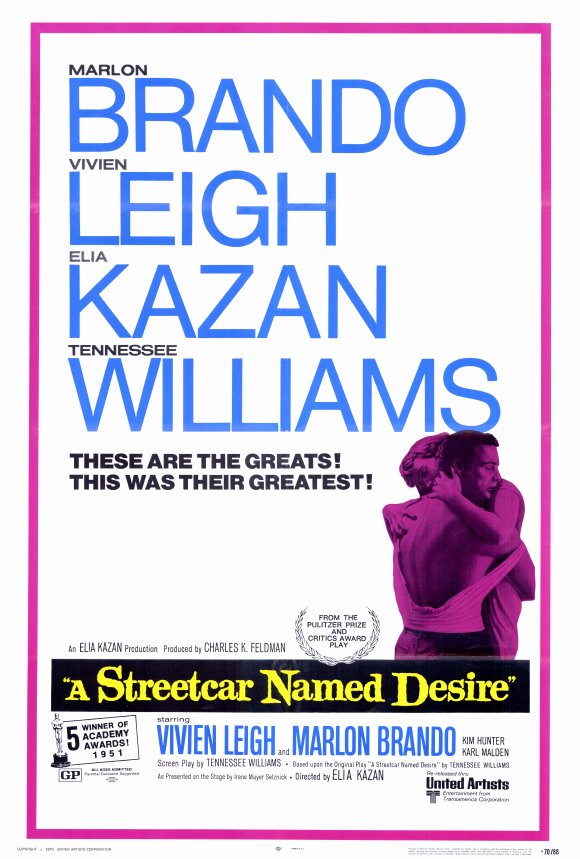 The more I see of director Elia Kazan’s work the more I want to see. I’ve seen five of his films so far and I can’t wait to see more. He creates such realistic drama and tension within worlds that are sometimes not so pretty. You’ve got to really commend an Old Hollywood director for pushing the envelope like that, before gritty was really acceptable anywhere except within the Noir genre. I feel like he did the kind of films that Scorsese makes now and Scorsese oughta thank Kazan for paving the way.

Vivien Leigh won the second of her two Oscars for her portrayal of the trouble Blanche DuBois, a role originated on Broadway by Jessica Tandy. Leigh has arguably portrayed two of the most famous women characters of Old Hollywood, well of any Hollywood really, having previous won the Best Actress Oscar for her tour-de-force performance twelve years earlier as Scarlett O’Hara in Gone With The Wind. To be perfectly honest, I’m not sure I’ve seen any other of Leigh’s performances, but these two alone have endeared her in my heart forever. Luckily for me, and all of you, Leigh is TCM’s Star of the Month this September, so we all have a chance to catch up on her filmography. In fact, they are showing this film on September 14th and again on September 25th, so if you haven’t seen it and don’t have Instant Netflix, but do have TCM, do yourself a favor and watch it. I love that Leigh won both her Oscars for playing fractured Southern Belles, when in reality she was British. I’m not sure if I’ve ever heard her talk in her actual accent. She’s so wonderful in this, and it is such a different kind of performance that the one she gave in Gone With The Wind, she displays an impressive range when you compare the two performances.

Marlon Brando originated the role of Stanley Kowalski in Kazan’s 1947 stage production of Streetcar before appearing in the film version four years later. This would be his first lead film role, and second film appearance. From the minute he appears on the screen, he is unforgettable – and unlike anything anyone had seen before. He is pure energy and he tears through movie with such passion and such rage, that he is not long forgotten after the last reel ends. I really feel he lost the award for Best Actor to Humphrey Bogart because he was still so new to film and Bogart was already a living legend. I mean, I love Bogart in The African Queen, but the two performances are completely different types of brilliance. Brando would eventually win the award three years later for On The Waterfront and again for 1972’s The Godfather. In fact Brando was nominated for Best Actor seven times and Best Supporting Actor once. He was nominated four years in a row from 1951-1954. He really in brilliant in On The Waterfront, but for me it will always be his performance in Streetcar that I’ll think of when I think about what an amazing actor he was.

Kim Hunter also originated her role in the broadway production of Streetcar. It was her Broadway debut, although she had made her film debut many years earlier. When I think of Kim Hunter I mostly think of Zira from Planet of the Apes, but that’s mostly because I’ve seen that film a million times. She is so wonderful as Stella Kowalski, the reason behind one of the most famous lines in all of cinema history. She’s able to really hold her own against Brando and Leigh’s powerhouse performances. And while the leads both give larger-than-life kind of performances, Hunter is more subtle, but equally powerful.

Like Brando and Hunter, Malden originated his role in the Broadway version of Streetcar. True story: I used to call him potato-nose when I was a kid. I used to love watching Malden and Michael Douglas in the 1970s cop show The Streets of San Francisco. That being said, I never really knew how wonderful and actor he was until I saw this film and On The Waterfront, also directed by Kazan and also for which he was nominated for Best Supporting Actor. Malden is sometimes quite and somber in this film and at other times explodes with as much heat and passion as Brando.

This is truly one of the greatest films ever made. Everything about it is perfectly executed. Just don’t watch it too late at night.

If you’re interested in purchasing the film, you can do so here.

← Movie Quote of the Day – Hable con ella (Talk To Her), 2002 (dir. Pedro Almodóvar)
It’s The End of Summer and the Beginning of Fall Film Festivals →