I am a huge George Stevens fangirl. He started directing in 1930, was nominated for Best Director five times, winning twice for A Place in the Sun and Giant. He was also awarded the Irving G. Thalberg Memorial Award in 1954. He directed 18 Oscar nominated performances (two won: Charles Coburn in The More the Merrier and Shelley Winters in The Diary of Anne Frank). All and all, his films received 69 Oscar nominations, winning 15.  Other than the films already mentioned, I also recommend Vivacious Lady, The Talk of the Town, Gunga Din and Shane.

There be spoilers ahead, so if you haven’t seen the film, BEWARE. 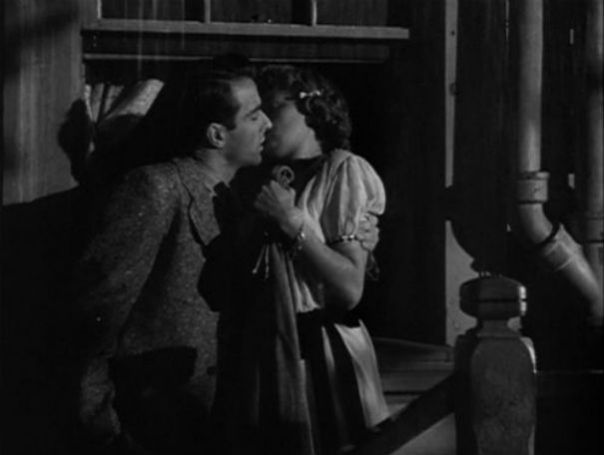 A Place in the Sun is the second film adaptation of  Theodore Dreiser’s novel/play An American Tragedy. In it, Montgomery Clift plays working-class George Eastman, who gets a job in his rich uncle’s factory. On his first night in town he sees socialite Angela Vickers (Elizabeth Taylor). Although she completely ignores him, he falls head over heels. George begins work in his uncle’s factory and meets the hapless Alice Tripp (Shelley Winters), and basically seduces her. This is one of my favorites scenes in the film. Shelley Winter’s is so fragile and her Alice is so grateful of the attention that she just sort of lets it happen. I don’t think George seduces her out of malice; he’s just lonely and wants someone to share a bed with. I also think this part of the film is interesting because in today’s society, you could date your co-worker, you could sleep with them, etc. and no one would really care. But in 1951, Alice doesn’t want her landlady to know she’s had a man over. The two often discuss that if anyone finds out about their relationship, they’d both be out of a job. Also of note, Alice talks about working six days a week. Can you imagine that? She works six days a week to pay for her shitty apartment, which is contrasted with the idle rich Eastman’s who run that factory. 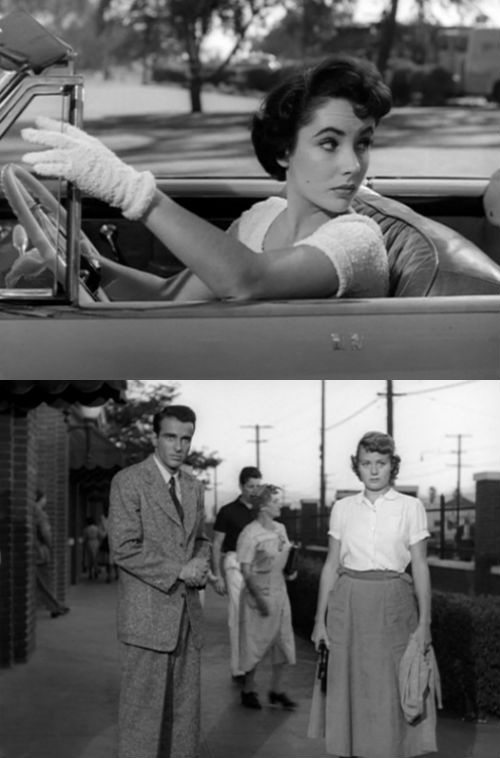 Speaking of the idle rich, I love the scene where Angela comes by the factory to pick someone or other up just as George and Alice come off their shift. The look on everyone’s face basically underscores all of their characters. There isn’t a more telling scene in the entire film. I really love Shelley Winters. In a career that spanned almost sixty years, Winters was nominated for Best Actress for her role in this film (she lost to Vivien Leigh in A Streetcar Named Desire) and went on to be nominated for Best Supporting Actress three times, winning twice: The Diary of Anne Frank (won), A Patch of Blue (won) and The Poseidon Adventure. There’s this really great list on MUBI that includes every film she’s ever died in; it’s quite a lot of films.

The scene where Angela finally takes note of George just kills me every time. She’s so forward. A girl of her class can afford to be this forward and not risk her entire future the way it would be for Alice. I believe her character is supposed to be about 17 years old (and still in high school, or just starting finishing school) in this film and in fact Elizabeth Taylor was just 18 years old when she made this film. She and Montgomery Clift have such amazing chemistry in this film; it’s one of the driving forces of the film. In reality, the two became great friends and stayed such until Clift’s untimely death in 1966. Taylor was present during his car accident in 1956 (which happened after a party during the filming of their film Raintree County) and purportedly pulled a tooth out of Clift’s tongue when he began to choke on it. In her lengthy career, Elizabeth Taylor was nominated for five Academy Awards (four in a row), winning twice: Raintree County (57), Cat on a Hot Tin Roof (58), Suddenly, Last Summer (59), BUtterfield 8 (60, won) and Who’s Afraid of Virginia Woolf? (66, won). She also received the Jean Hersholt Humanitarian Award in 1993. Clift only made 17 films, but he was nominated for Best Actor three times: The Search (48), A Place in the Sun (51), From Here to Eternity (53) and Best Supporting Actor once: Judgment at Nuremberg (61).

I had to include this line because it is so damn romantic. I can’t even handle this scene. I tear up every time. It’s a fascinating scene because George opens up to Angela so easily and on a crowded dance floor without hesitation. However, when Angela starts to tell him she loves him as well, she stops herself and suddenly shouts, “Are they watching us?” then pulls George out of doors before she continues to tell him that she loves him too. It’s a startling scene and I still don’t know quite what to make of it. Why does Angela care if they are watching her? And, clearly, the weren’t, but she panicked anyways. Even after George begins to be brought into the family social circle more Angela is only really tender with him when they are in private. So, for George, both his love affairs have to be done in secret. 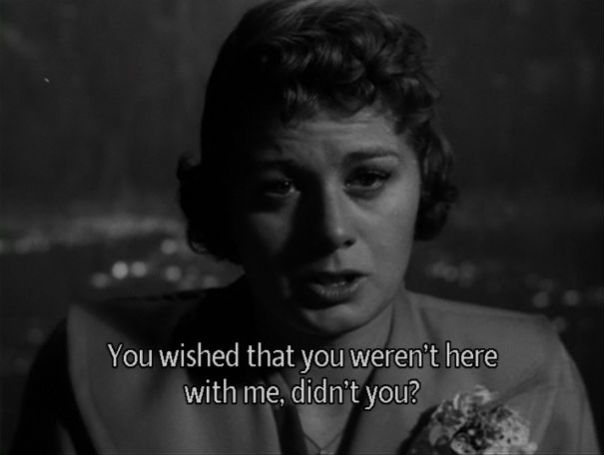 Which brings us to the giant twist about two-thirds of the way through the film. Alice is pregnant. George finds her a doctor who can “take care of it,” but when she visits him, he turns her away. That’s a rough scene, both in terms of Shelley Winter’s magnificent performance, and the shaming that was involved in “unwanted pregnancies.”  I guess this is still something that happens to some women, but it’s gotten so much better now that when you watch something like this, you can’t help but be grateful of the times you live in. In the Alice’s last scene, she’s finally had to resort to blackmail to get George to agree to marry her (and he would have, but the county clerk’s office was closed). They go out for a boat ride on a lake that earlier George had heard stories about people drowning in. This whole sequence is one of the greater pieces of horror I’ve ever seen. It’s so tense. The whole time you wonder if George is really going to kill her. From the minute they get on the dock to when they’re out in the middle of the lake. Alice can feel it too. She finally says something and George snaps and heads for her, but then he immediately snaps out of it before he reaches her. By then, it is too late and, frightened, Alice causes herself to fall overboard. This is where the morals of the story come to play. Later, when George is on trial for her murder he explains what happened, but no one believes him. He comes to realize, that even though he didn’t kill her, he had 1) thought about it and 2) he didn’t really try to save her. What are the implications of that? What does that mean for his eternal soul? 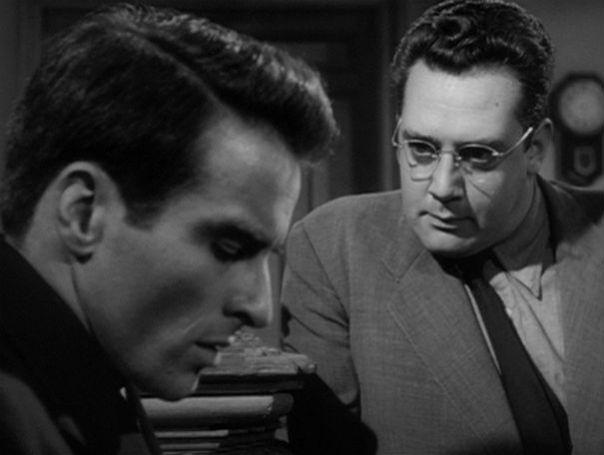 Raymond Burr, a good six years before debuting as Perry Mason on television, plays Dist. Attorney R. Frank Marlowe, who relentless questioning of George during the trial scene acts as a perfect companion to Clift’s devastating performance. As you could guess from a source novel called An American Tragedy, things do not end well for George, who gets sent to the electric chair. What is so great about these final moments with the characters, is that he finally takes responsibility for his actions. All through his romance with Alice he never really acknowledges the promises he’d made to her. With his relationship with Angela, everything was because of his love for her, but it’s always that abstract concept. Facing his own death allows George to look back on his life and claim it as his own for once and for all. His final goodbye to Angela will have you bawling like there’s no tomorrow or you do not have a heart.

Lastly, I just wanted to share these two shots because holy matte paintings Batman! Although, I read that this was filmed in Echo Lake, Cascade Lake and Lake Tahoe, so maybe those aren’t matte paintings after all. Regardless, they’re breathtaking shots.