The trailer for The Longest Day calls this one of the most ambitious films ever made and I think that is still true today. It would take multiple posts to write about everything there is to write about with this film. Instead, I am going to write about a few of my favorite performers in the film (look at that cast list; it’s insane!). You can read a lot about the production of the film here.  I used to love this movie when I was a kid and was lucky enough to see it on the big screen at the TCM Film Festival in 2012 (first thing in the morning, too!). If you ever get a chance to see it on the big screen, don’t miss it! It’s amazing. The film was nominated for five Academy Awards, winning two: Best Film Editing, Best B&W Art Direction, Best B&W Cinematography (won),  Best Special Effects and Best Picture. The other films nominated for Best Picture that year were: The Music Man, Mutiny on the Bounty, To Kill a Mockingbird and winner Lawrence of Arabia. 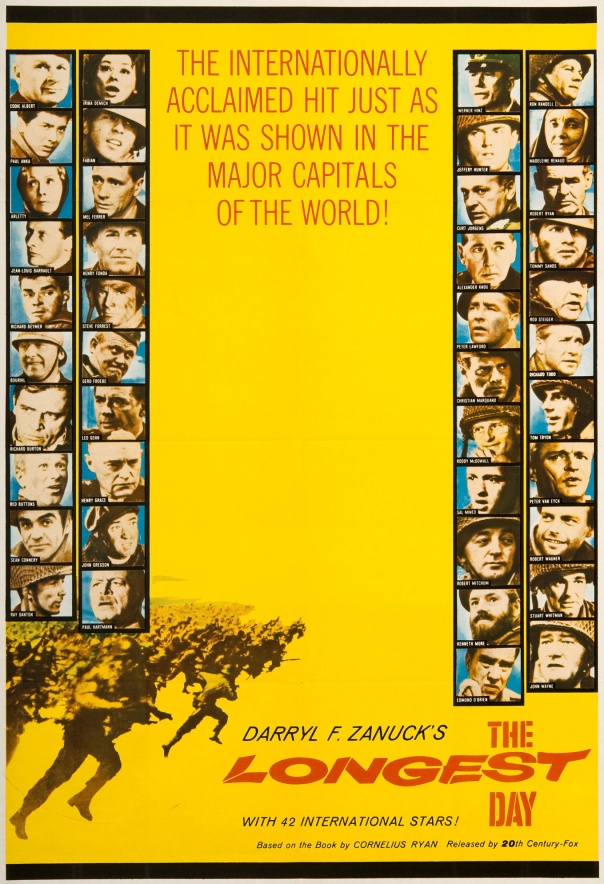 This film had three main directors, as well as a fourth Gerd Oswald, who directed the iconic parachute drop sequence and a fifth in Daryl Zanuck, who did some uncredited directing on the picture. I love that the film shows D-Day from both sides and the Germans speak German and the French speak French. This is a rarity even today in war films set in non-English countries (*cough* War Horse *cough).

There are a lot of great shots during the battle sequences of this film. Fans of Saving Private Ryan owe it to themselves to see this film, which is a clear inspiration for the landing sequence in that film.

There’s one particular aerial shot that leaves me breathless every time. I wish I could put a video here so you could see it, but trust me; it’s so amazing.

When I first saw this film (I was probably 8 or 9), John Wayne was the only one of the “42 International Stars!” that I knew and this film made me love him so much. Apparently this role was sought by Charlton Heston, but at the last minute Wayne was cast. Most of the stars in the film received $25,000 for their participation, but Wayne was upset at Zanuck after some remarks he made referring to Wayne’s film The Alamo, and insisted on getting $250,000. Regardless, this is one of Wayne’s best performances; a little comic, a little dramatic and very charismatic. In his long career, Wayne received three Oscar nominations and one win: Best Picture: The Alamo, Best Actor: The Sands of Iwo Jima (1949), True Grit (1969, won).

In the last few years, I’ve fallen very hard for Henry Fonda. He’s just so damn good in all of his movies. In this film he plays the son of Teddy Roosevelt, a general who does his best to keep the moral of his troops up and live up to his family’s legacy. Fonda was nominated for three Academy Award, winning one: Best Picture: 12 Angry Men, Best Actor: The Grapes of Wrath (1940), On Golden Pond (1981, won). He also received an Honorary Award from the Academy the year before he won his Best Actor Oscar.

Was anyone ever as tough as Bob Mitchum? I don’t think so. I also think Mitchum perpetually had a cigar on hand, just in case. Apparently during filming, the extras didn’t want to jump into the water, fearing it would be too cold. Mitchum got fed up and jumped in first; the extras followed suit. What a badass. Mitchum received his only Academy Award nomination for Best Supporting Actor for 1945’s The Story of G.I. Joe.

When I saw the film at TCMFF12, Robert Wagner was on hand to introduce the film. Wagner plays one of many nameless Army Rangers, though he is given a mission and does everything he can to make it a success. He represents the one, that makes the many that is army work.

No one ever looked as innocent as Sal Mineo. He’s like Bambi incarnate. He plays an innocent Private, who is the kind of innocent soul who should have to fight a war. He’s the kind of soldier that is there just for the numbers and will eventually become cannon fodder and you follow his movements on camera, just waiting for a death you know will be heartbreaking and bittersweet. Mineo was nominated for Best Supporting Actor twice for 1956’s Rebel Without a Cause and 1960’s Exodus.

Pre-fame Sean Connery places a sarcastic Scottish Private who continually makes snarky remarks throughout the film. The Longest Day opened at the same time that Dr. No opened in the U.K., though it would not open in the U.S. until May of the following year. Connery was nominated and won the Academy Award for Best Supporting Actor for 1987 The Untouchables.

One of my favorite scenes in the film takes place between a mortally wounded Richard Burton and jaded American Richard Beymer. The two share a deep moment of true wartime philosophy and the scene is one of the most haunting in the entire film. The year before Beymer appeared in Best Picture winner West Side Story and Richard Burton was about to begin a decade of unparalleled brilliance (along with Peter O’Toole). Burton was nominated for seven Academy Awards, though he never won: Best Supporting Actor: My Cousin Rachel (1952) and Best Actor: The Robe (1953), Becket (1964), The Spy Who Came In From The Cold (1965), Who’s Afraid of Virginia Woolf? (1966), Anne the Thousand Day (1969) and Equus (1977).

I thought I would end this post with this beautiful, iconic shot. I’m sure this film is on television somewhere today and I highly recommend that you watch it if it is.