Somehow I missed this film when it was first in theaters and just saw it for the first time a few weeks back at a screening at the Cinefamily with writer/director Gina Prince-Bythewood in attendance. This look at the film will be partially my thoughts on the film and a some of the insights she shared with the audience during the Q&A after the film. There will be some plot spoilers. 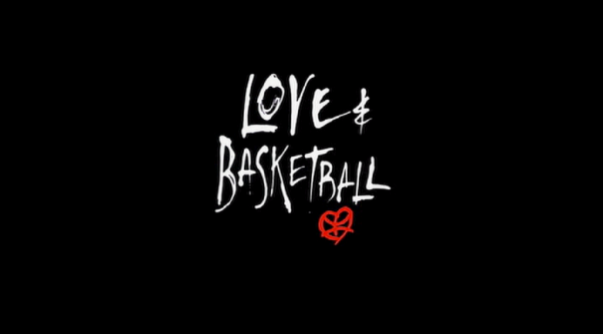 I also wanted to write about this film this week to tie-in with Prince-Bythewood’s latest film Beyond The Lights, which opens today.

Although the film is split in four “quarters” (like a basketball game!), she told everyone at the screening that if you pay attention and break the script down, it follows the three-act structure.

The film tells the story of two best friends – Monica and Quincy – from when they first met as children and then over the next 25 or so years of their lives. You might recognize young Monica – the actress Kyla Pratt was Eddie Murphy’s daughter in all the Dr. Doolittle movies. When Quincy first meets Monica, she’s just moved in next door and he thinks she is a little boy. He asked her to join him in a game of basketball, only to discover she is a girl. They play regardless, and just as it seems Monica is going to win – he pushes her. This causes her to cut her face. Originally in the script she was supposed to lose a tooth (or break her nose, I can’t remember), but when Sanaa Lathan was cast as the older Monica, it was changed to this scrape, since Sanaa has a scar on her chin already. This whole first section with young Monica trying to do what she loves and getting grief from everyone in her life to “act like a girl” is pretty telling about society and makes up a lot of the film’s themes.

I just want to point out once again how much I love Sanaa Lathan. I wrote a lot about her a few weeks back when I wrote about Something New. She’s fantastic.

There’s a lot said about Monica’s hair in this film. When she’s still a little girl, she’s giving grief for keeping it in braids, then when she is a teen, she gets the same grief. Prince-Bythewood shows her sister Lena (Regina Hall) doing her hair a few times throughout the movie – this is how the two sister’s bond. There’s a heartbreaking scene when after the big game, Monica has to get ready for the Prom and her mother finally shows her a little affection – because her hair is straight and she’s actually got make-up on.

Speaking of the big game, one of Monica’s big faults his her inability to control her emotions on the court. Off the court, she’s shy and reserved – mostly because her mother has done a number on her because of her passion for basketball. But on the court, she gets to do what she loves and this passion sometimes causes her to lose her cool. This frame is right after she messes up a shot at a big game while an important scout is watching. She’s upset because she’s done poorly and she thinks she may have messed up her entire future.

I love when she finally does go to the Prom and she’s so awkward in her dress and she sits like she would on the court. She just can’t help it! Her Prom date is played by Boris Kodjoe – who she also dates in Brown Sugar (which is another film I highly recommend). Quincy (now played by Omar Epps) is at the Prom with another girl (Gabrielle Union), but it’s clear that both Monica and Quincy wish they were with each other and not their respective dates.

This scene is so important. We need more sex scenes directed by women, because they tend to be more tender and more realistic and less voyeuristic. These two are awkward and shy, but in love and intimate. This scene also shows losing your virginity as something that is most definitely not Hollywood perfect, even as the moment is special. This is also features one of the few sex scenes I’ve ever seen where a condom is actually involved!

We then cut to Third Quarter, where both Monica and Quincy are playing basketball at USC. Quincy, whose father is a professional basketball player, is a starting freshman and a minor college sports celebrity. Monica, on the other hand, barely made it on the team and needs to learn to check her arrogance. I love how this whole sequence plays out because it’s brutal, but kind at the same time. It really feels like someone being forced out of their childish ways and into adulthood. 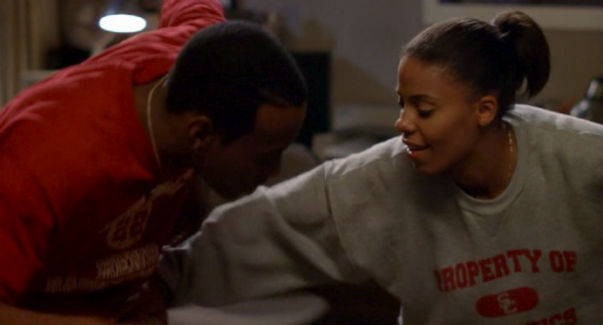 Monic and Quincy start this sequence dating and there’s the best strip basketball scene ever (sorry What’s Your Number?), but thing start to fall apart when Quincy needs more support than Monica can give him. This is another part that says a lot about society and its reaction to passionate, working women. Quincy wants someone to dote on him, someone who will help him escape his turbulent family life, not really a partner. Monica wants to be his partner, but she also needs to focus on her career, her skills, her life. She gives him what she can, but it’s not enough and eventually the two split.

The last part of the film starts with Monica playing professional basketball in the early 90s in Europe. At this time, that was the only option for women. Throughout the film, Monica said she would be the first woman in the NBA. She’s clearly talented enough, but the world is not ready for mixed men and women sports, and this is before the WNBA existed, so the only option for women was to go to Europe. After years of this – and super expensive phone bills – Monica decides to come home. This part is so heartbreaking. I remember when the WNBA was formed and I had never given any thought to what women who wanted to be pro basketball players did before it was formed. I don’t even think I realized there were women who had wanted to. So goes our nations huge focus on male sports and almost complete lack of interest in women athletes. 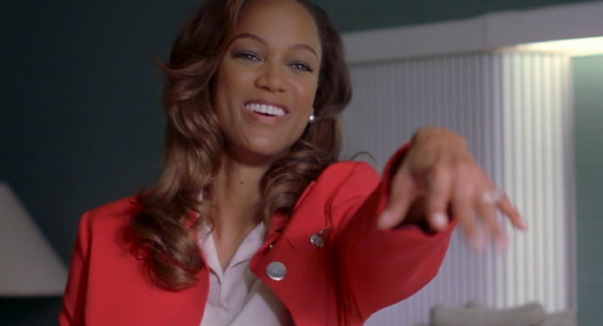 I couldn’t write about this film and not mention Tyra Banks’ character Kyra. When Monica comes back from Europe, Quincy is recovering from an injury and she goes to see him in the hospital. There she meets his fiancée. Prince-Bythewood said of this character that 1) there was a scene that had to be cut from the film that showed that Kyra did not really love Quincy and that she was engaged to him only for the promise of being a pro basketball player’s wife and the lifestyle that comes with and 2) that because she wears the uniform that she wears, they were able to get donated plane tickets for the cast and crew to film the Europe scenes of the movie. Sometimes product placement is a good thing! Let’s talk about Alfre Woodard. For most of the movie, she’s cold and a little cruel to Monica, always trying to get her to “act like a girl” or being too bright and sunny. Eventually, she and Monica have it out. Monica tells her how ashamed she feels about how her mother acts – being a 50s-esque housewife to a husband who doesn’t seem to care, at which point her mother finally opens up on a personal level with her daughter. This scene is so powerful. We hear about the compromises her mother had to make for her family. Monica finally gets a glimpse at a generation who didn’t have the choices she has and maybe appreciates what she has just a little more for it.

At this point, Monica has quit playing basketball and is working in her father’s office. Her hair is straightened, she’s wearing heels and tan suits. It’s all very depressing. Which brings us to the last part of the film, where Monica gets Quincy to play one-on-one one last time with her – this time for his heart. It could be really cheesy, but both actors are so good that it works, it really works. She realizes the reason basketball is not fun anymore is because Quincy is gone and she’s determined to get him back. And – spoiler alert – she does! The film ends as the WNBA forms, and Monica gets it all – her dream job, her dream man and a little baby girl too! It’s the stuff of Hollywood fantasy, but if we see it up on the big screen, we think it’s possible and if we think it’s possible, we try to make it happen for ourselves too! As far a Gina Prince-Bythewood is concerned, it seems she got the  same kind of happy ending, so these kind of dreams can come true!