So I had a pretty hectic month and thus I definitely did not keep up the pace of one film a day (this year is probably going to continue down that path). Before I get into the films I watched this month, I have some big news! This Friday, March 4th, is going to be my last day at Rotten Tomatoes! I have taken a job with Turner Classic Movies aka TCM aka the greatest thing to ever happen to movies! This means I will be relocating from Los Angeles to Atlanta. This also means things are going to be really, really hectic in March (and maybe April!) and thus I am going on a bit of a hiatus after this post. What that means: no Movie Quote of the Day until I get settled. This could mean all of March, it could mean into April, it could mean less. I’m really not sure. I will, however, do a wrap-up post for March, although it may only be a handful of films. That said, I did watch several great films in February, and as always you can see the full list after the cut!

END_OF_DOCUMENT_TOKEN_TO_BE_REPLACED

Dom: Yo man, I be seein’ you and your little friends with y’all flattops and MC Hammer pants, riding around in this shit, looking like y’all came out of a DeLorean or some shit. Fuck is up with that shit anyway?
Malcolm: You know, the ’90s was like the golden age of hip-hop. Everything from It Takes a Nation of Millions to The Blueprint was killing it. I guess me and my friends just wish we grew up back then.
Dom: It Takes a Nation came out in ’88. Blueprint came out 2001. What the fuck are you talkin’ ’bout right now?
Malcolm: Technically, um. . .but, you know, the spirit of the music was definitely still ’90s. I mean, It Takes a Nation, Straight Outta Compton, Paid in Full was ahead of their time. And then you got Snoop, Biggie, Wu-Tang. They took the game to the next level. Blueprint was kind of like the punctuation mark.
Dom: Let’s not forget, the ’90s also gave us Vanilla Ice, MC Hammer, and we can’t forget about the Fresh Prince.
Malcolm: Everything in the ’90s wasn’t great, but. . .but you gotta admit “Summertime” was a classic. 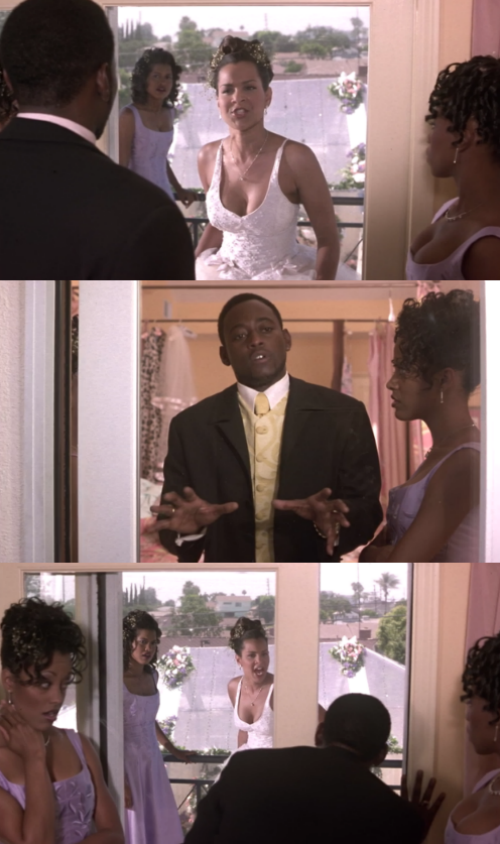 Lisa: Ya’ll must think I’m stupid like one of those Thelma & Louise bitches!
Mike: Nah, Nah—-
Lisa: Car broke down?! Tell that fool he could at least faced me like a man!
Mike: But, But—
Lisa: I’m not gon’ cry! I’m not! I spent too much time on this damn make-up!
Mike: Lisa, calm down. . .
Lisa: I am calm!
Mike: So then why are you yellin’?

Petey Greene (over the P.A.): Yo, I was reading my court papers the other day, y’all. They say, “Ralph Waldo ‘Petey’ Greene versus the United States of America.” I say, “Goddamn! No wonder I’m up in this motherfucker!” So I’m gonna dedicate this next one to my baby. Man, she gonna be up here in a minute, and this gal, Lord have mercy, she’s fine as frog’s hair, yeah. So while this is playing, I want y’all to think about the one y’all love. And I’m talking about the one sends you them pictures, man, not the cat in the next bunk.
Milo Hughes: [laughs]
Dewey Hughes: I guess you’re pretty hard up for entertainment around here.
Milo Hughes: Yeah, man. This is prison.