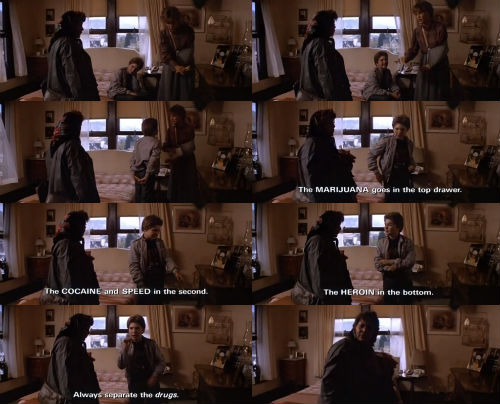 Irene Walsh: Pants and shirts are in the second. . . just, just throw them all into cardboard boxes. Forget the suitcases. Clark, can translate all that?
Mouth: Certainly Mrs. Walsh.
Irene Walsh: Oh, that’s wonderful.
Mouth: [in Spanish] The marijuana goes in the top drawer. The cocaine and speed go in the second drawer. And the heroin goes in the bottom drawer. Always separate the drugs.

I guess I watched less new-to-me films this last March than I have in any one month in over a year. There were several factors in my lack of new-to-me’s this month. For one, I spent a day and a half working on a short film with some classmates. Then I was in North Carolina on business (something related to this blog, which I will post about later) for four days. I also hurt my back, which caused me to lay in a vicodin-induced haze for a few days. Lastly, two of the films I watched last month were over five hours long. YES. Watching Bertolucci’s Novecento took an entire day, as did my epic watching of Kevin Brownlow’s restoration of Abel Gance’s Napoléon at the Paramount Theatre in Oakland last weekend. Oh yes, also, the lovely Kristen Sales of SalesOnFilm was in town for the spectical and we spent the better part of three days either watching Gance’s brilliant film or wandering around San Francisco eating and drinking and taking in the city’s delights. I also continued my re-watching of old favorites. I found in my watching of soooo many new-to-me’s last year that I began to miss watching films that were dear to me. So this year I am trying to balance new-to-me’s with a healthy dose of old favorites. Lastly, I saw some great films (mostly  old favorites, a few new-to-me’s) at the Castro Theatre this month: Manhattan, Welcome To L.A. (n-t-m), Reality Bites, My Own Private Idaho, Freeway (n-t-m),  Shame and Take Shelter. As always, the full list of films is after the cut, plus five highlights.

END_OF_DOCUMENT_TOKEN_TO_BE_REPLACED

Tags: A Woman Under the Influence, Delicacy, Freeway, La délicatesse, Napoléon, The Goonies