So I got back on the band wagon in May and managed to watch almost a movie a day. I saw quite a few foreign films and shorts this month. As always, you can watch all my reviews for the films here on YouTube and after the cut I have all the films I watched, plus I highlight my five favorites that I watched.

END_OF_DOCUMENT_TOKEN_TO_BE_REPLACED 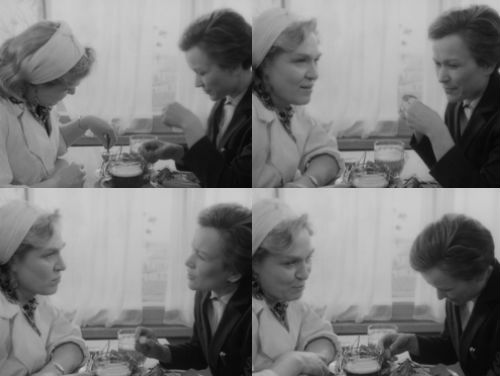 Shura: Before the war, I lived in Moscow. But after the evacuation, I found myself here. So it goes.
Nadezhda Petrukhina: I have friends in Moscow. I haven’t seen them in about five years.
Shura: It would be great to see Moscow.
Nadezhda Petrukhina: Funny thing is, sometimes I set down to write them a letter and nothing comes of it. There’s nothing interesting to write about. I feel I should make something up.
Shura: Nothing interesting in your life? I would never have thought.
Nadezhda Petrukhina: Seems like I’m always running around, but it’s all for nothing. There’s no pleasure in it for me or for anyone else. That’s the way it goes.
Shura: I don’t know. I enjoy life. It’s just a shame that time goes by so fast.

William A. Wellman’s “Wings” To Be Released on DVD and Blu-Ray

82 Years of Oscar, 10 Favorites and 5 Films I Could Have Done Without

So I recently completed one of my life goals: watching every single film that won the Academy Award for Best Picture. I would say it took me 24 years, because that’s how old I am and the Academy Awards have been my favorite hobby as long as I can remember. However, it was in the last six weeks or so that I’ve been really hitting the list hard because I realized I only had twenty left and that seemed like a very doable task. All but two of these films are available on DVD. Sadly, one of my Top Ten Winners isn’t. You can, however, get it on VHS and find it on YouTube if you’re wily. It’s been a wonderful experience watching all 82 films. Most are really quite wonderful, others are so-so and a handful I thought were downright boring. My next goal is to watch all of the films that were nominated for Best Picture. There are 474 films that have been nominated and I’ve seen 257 of those films already, which only leaves 217. I’m figuring on some of the earlier films to be a little hard to come by and I also plan on taking a few years to try to complete this goal. I’m sure I’ll write something about that when I do finish it! But now on to my favorite and least favorite Best Picture winners.

Tags: Casablanca, Chariots of Fire, Gigi, Gone With The Wind, Grand Hotel, How Green Was My Valley, Kramer vs. Kramer, Marty, Oliver!, Out of Africa, Rocky, the Academy Awards, The English Patient, The Godfather, The Oscars, West Side Story, Wings

Last night I watched William A Wellman’s 1927 masterpiece Wings, which was the very first film to win the Academy Award for Best picture. Within the first 15 minutes I thought it was more dramatic, romantic and exciting than most films made today. How wonderful, I thought, a film that was made 83 years ago can still feel so fresh and amazing, positively timeless. (On a side note, this film is not available on DVD and it’s a crying shame. You can vote here on TCM to try to get it released on DVD, and even if you haven’t seen it I urge you to do so).

This got me thinking about how much I love film, and why I love film. The other day someone on Twitter asked me how many films I watched a day and I replied, “as many as possible!” I told someone else that I think I have celluloid in my blood instead of iron. I can’t remember my life before I discovered films; I’ve been watching them always. Recently, I’ve been fortunate enough to be able to watch more than ever; I’ve already seen 271 new-to-me films this year! This is because I’ve graduated from college, but have yet to find a full time job (I substitute teach once or twice a week), I’m single and I’m childless. That leaves a lot of time to watch films. I also live in a household that has TCM, my absolute favorite channel on television.

I haven’t yet answered why it is I love film so much. I think part of it has to do with the escapism film allows. For two hours you’re in a perfect world, or a dystopic world or whatever, and it can be the best place you never knew existed. With each new film you meet new friends, characters that are as dear to you as anyone you’ve ever met in real life or ones you hate more than you ever knew you could.

But I’m also in awe of the people who make the films, not just the actors and directors and screenwriters, but the crew. Every single film you see was put together by hundreds of people, who spent hundreds of hours working to bring this new world alive. It’s just so incredible.

Also, with every film I watch I always think, “This is someone’s favorite movie ever” or “I bet someone absolutely loathes this film!” It’s phenomenal the emotional response a film can get out of people. And then there are people who can’t see the art in any film, who don’t see the point of film at all. Those people make me sad. How could something that brings me and so many others so much joy, mean absolutely nothing to others? It’s unfathomable.

So while I’m at this unique place in my life where I’ve got more free time than I probably will ever again, I’m going to fill it with films. All films. As many films as I can get my hands on, as often as I can stand it. I don’t know that’ll I’ll ever have another opportunity like this, to spend all my time with the love of my life, with film. I just hope film loves me as much as I love it. Regardless, this is how I choose to spend my time, and I wouldn’t have it any other way.