This was one of those movies that I’d always meant to watch and just never had. I finally watched it for the first time a few weeks ago and I was completely blown away. It’s no wonder it was added to the National Film Registry the first year it was eligible. It’s just so eloquently simple and yet about this completely horrid person. Perhaps the real Jake La Motta found some redemption with the people in his life, but in this film he finds it only within himself. I think this is Scorsese’s best film. I know I said that about Goodfellas a few months ago; but I hadn’t seen this film then. Raging Bull was nominated for eight Academy Awards, winning two: Best Sound, Best Cinematography, Best Editing (won), Best Supporting Actress – Cathy Moriarty, Best Supporting Actor – Joe Pesci, Best Actor – Robert De Niro (won), Best Director and Best Picture. It was up again Coal Miner’s Daughter, The Elephant Man, Tess and winner Ordinary People.

I think it’s important to note that this marked the beginning of Scorsese’s epic collaboration with Thelma Schoonmaker, who has edited all his films since. Schoonmaker had previously been nominated for her editing of Woodstock in 1971. For her work with Scorsese she’s been nominated for five Oscars, winning once: Raging Bull (won), Goodfellas, Gangs of New York, The Aviator and The Departed. 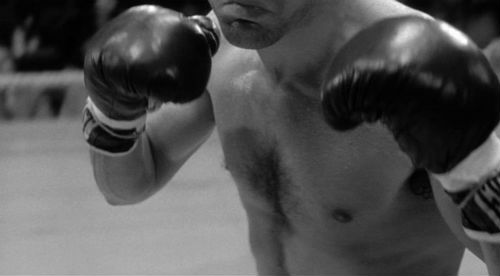 Also interesting to note is Michael Chapman’s exquisite cinematography. Though he was nominated for an Oscar, he lost to Geoffrey Unsworth and Ghislain Cloquet’s work on Roman Polanski’s Tess. I would have thought Freddie Francis’ work on David Lynch’s The Elephant Man would have gotten nominated as well, but I guess the Academy could only handle nominating one B&W film. I think the choice to film the bulk of the film in black and white was a great choice. For one, it mirrors the way most of the fights were viewed on television. For two, it gives the film the same feel as all those boxing films that were so popular in the 40s and 50s. In particular I’ve read that the filmmakers were inspired by Robert Rossen’s 1947 film Body and Soul. If you haven’t seen it I highly recommend it. That film was nominated for Best Original Screenplay, Best Actor – John Garfield and won for Best Editing.

In the last year I’ve seen a lot of older De Niro performances (including both films for which he won his Oscars; Raging Bull and The Godfather Part II). It makes me both appreciate him so much more than I already did and feel really terrible that he’s stuck doing films like Little Fockers. I mean, maybe he’s having fun. But he was just so GREAT at the height of his career; I can’t help but feel a little ashamed of his later oeuvre. That being said, his performance as boxer-turned-stand-up-comic Jake La Motta is a powerhouse performance. He dominates the screen with passion and rage. But the performance isn’t just violence, there are these scenes where La Motta is quietly talking to his reflection or silently contemplating his life while incarcerated. Those scenes are just as powerful, if not more so, than his explosive scenes. Anyone who’s serious about becoming an actor owes it to themselves to study this performance. 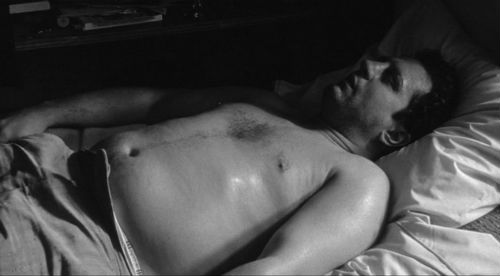 I also read a while back that this was one of the first films for which an actor gained a lot of weight. I had always assumed that meant he gained muscle weight. Much to my surprise, it was actually weight weight, as in he got fat. It’s kind of shocking to see De Niro go from this really fit, if somewhat bulky, boxer to this overweight has-been. It’s quite the transformation. 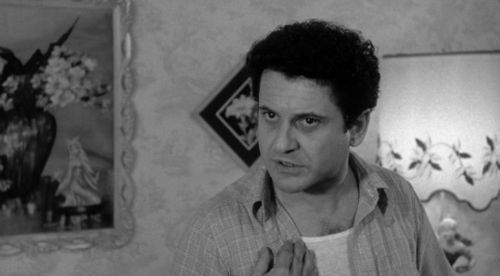 This film is not completely De Niro’s show; it also sports some really wonderful supporting performances. Joe Pesci is great as La Motta’s brother and some-time manager Joey. He’s the straight man to De Niro’s crazed genius. He sticks with his brother through some real messes, even when he knows better. The scene when Jake finally crosses the line and Joey leaves is just devastating. Although Pesci lost to Timothy Hutton in Ordinary People (talk about an amazing performance), he would go on to win an Oscar ten years later for Scorsese’s Goodfellas. 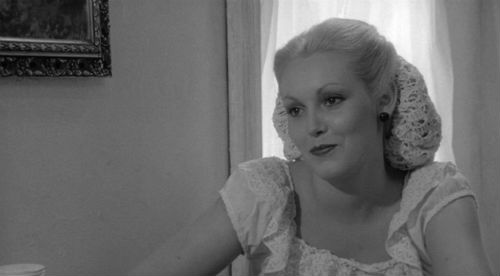 Lastly, I wanted to talk about Cathy Moriarty as Jake’s second wife Vickie. I just recently read that Moriarty was only 18 or 19 when they filmed this. That’s up there with Lauren Bacall in To Have or Have Not for mind-blowing young debut performances. She keeps up with De Niro’s La Motta brilliantly. There’s this one confrontation scene between the two of them where La Motta is just so irrational and unreasonable that Vickie just tells him everything he wants to hear (regardless of its veracity). It’s such an explosive scene and the two go blow-for-blow, almost as if they’re fighters and the living room is their ring. Moriarty lost to Mary Steenburgen in Melvin and Howard.

If you’re interested in purchasing this film (including a 30th anniversary Blu-ray edition), you can do so here.