Female Filmmaker Friday: A League of Their Own, 1992 (dir. Penny Marshall)

END_OF_DOCUMENT_TOKEN_TO_BE_REPLACED

I’m not sure when I first saw this film, but I think it was probably on television some time in the 90s. I didn’t do a good rewatch of the film until my first  semester of film grad school. One of my instructors used it a lot in his teaching screenplay form (it really is a great model), so on the last day we watched the entire film. Having just rewatched it again, I can’t help but think it really is a perfect film. It’s not the most realistic film (far from it); but it is storytelling at its finest. Tootsie was nominated for ten Academy Awards, winning one: Best Film Editing, Best Cinematography, Best Sound, Best Original Song, Best Original Screenplay, Best Supporting Actress Teri Garr, Best Supporting Actress Jessica Lange (won), Best Actor Dustin Hoffman, Best Director and Best Picture. The other film nominated for Best Picture that year were: E.T. The Extra-Terrestrial, Missing, The Verdict and winner Gandhi.

END_OF_DOCUMENT_TOKEN_TO_BE_REPLACED

Thelma: You’re a real live outlaw, aren’t ya?
J.D.: Well I may be an outlaw, darlin’, but you’re the one stealing my heart.

Mac: What is is sex?
Valerie: Sex? You know, making love. A man and a woman like each other and they take their clothes off. . .
Mac: Okay.
Valerie: No. No. No. We can’t because me and Ted are. . .well I guess we’re not. But I mean, we can’t because you’re an alien and I’m from the Valley and we may not even be, you know, anatomically corrector for each other. That could be a real problem [Mac’s pants unzip] No problem. But I mean, no, no, no. It just wouldn’t work. I mean you’re from out of town. The phone bills would just be hell.
Mac: Shh. . .
Valerie: I didn’t want you to think Earth girls were easy.
Mac: What is “easy”?
Valerie: This is “easy”. 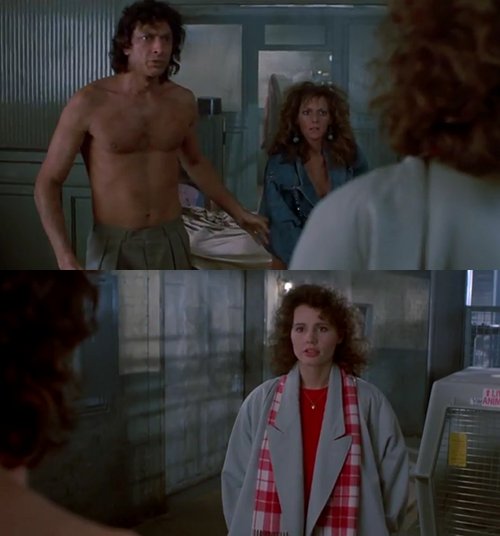