Emma: Now, my dear child you should get some sleep.
Emilia: Oh, not yet. I meant, what happened between you and Michael?
Emma: Oh. [sighs] Priorities.
Emilia: He liked boys better than girls?
Emma: Uh, Not then. I. . .Well, how should I know? We didn’t talk about it quite so openly in those days. No, I meant Michael knew that my priority was dancing.
Emilia: Are you sorry?
Emma: No, I don’t believe in being sorry. We are what we are.

Nancy: I want a new life.I want to go skiing. I want to go dancing. I want to go to the beach. I want to ride through Muir on a motorcycle. All we ever do is see movies.
Allan: Yeah, well I write for a film magazine. They send me. Besides, I happen to like movies.
Nancy: You like movies because you’re one of life’s great watchers. I’m not like that. I’m a doer. I want to live. I want to participate. We never laugh together.
Allan: How can you say that? I don’t know about you, but I am constantly laughing. I chuckle, I giggle, I guffaw, occasionally.

Elliot Garfield: I think you’re dynamite, you know that? I love listening to you talk. I hate living with you but your conversation is first class.

This film was up for five Oscars, including Best Picture, ultimately losing to Woody Allen’s Annie Hall. Richard Dreyfuss did, however, win Best Actor – at 29 he was the youngest winner until Adrien Brody won for 2002’s The Pianist. Dreyfuss also won Best Actor at the BAFTAs, the Golden Globes, the Kansas City Film Critics and the LA Film Critics for his portrayal of some-time Shakespearean actor Elliot Garfield. Marsha Mason was also up for Best Actress, Quinn Cummings for Best Supporting Actress and Neil Simon for Best Original Screenplay – his only nomination in that category (he was nominated in the Adapted Screenplay category 3 times). 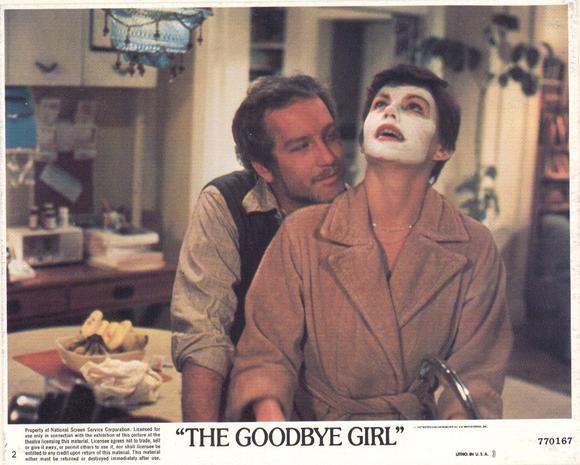