You can see the first two parts of my look at Woody Allen’s complete directorial filmography here and here and don’t forget about the Woody Allen Blogathon on May 20th. This post covers Allen’s work from 1992 to 2000. While perhaps not the strongest period in his career (especially compared to the previous decade), this decade was far kinder to Allen’s talent than what came after. 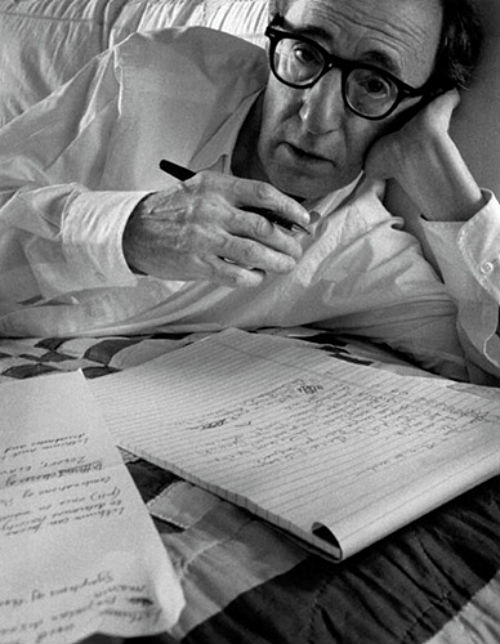 This is another film that it would behoove you to have seen some specific classic films first. This time, instead of Bergman, it’s German Expressionism films. I would say if you’ve seen Murnau’s Phantom and Pabst’s Die 3-Groschen-Oper (The Threepenny Opera), you’d be in good shape. That’s not to say you wouldn’t enjoy Allen’s film without seeing those others, but you might not “get,” for the lack of a better word, what the director was doing. This was one of Allen’s biggest financial flops (grossing about $2 mil on a $14 mil budget), but as far as I’m concerned it’s one of his most successful artistically. He built the entire town in which the film is based in a studio, which adds to the German Expressionism feeling. The film also contains one of his greatest ensembles, including: Allen himself, John Malkovich, John Cusack, Mia Farrow, Jodie Foster, Julie Kavner, Madonna, Kenneth Mars, Lily Tomlin,  Kathy Bates and Donald Pleasence. This is definitely one of Allen’s most underrated and misunderstood films, but I love it dearly. 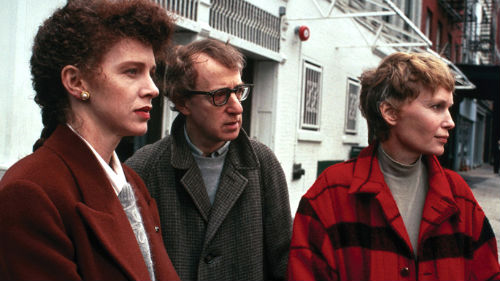 His next film is one of his most critically acclaimed; the film currently holds a 100% rating on Rotten Tomatoes. In it Allen takes a raw and honest look at two married couples as they begin to fall apart. Allen filmed the entire picture with a handheld camera and did minimal lighting, telling the actors to walk in and out of the light as they pleased. The couples are played by Allen, Mia Farrow, Judy Davis and Sydney Pollack. The supporting cast is also superb, including Blythe Danner, Liam Neeson and Juliette Lewis. The film was nominated for Best Original Screenplay and Best Supporting Actress (Judy Davis) Academy Awards. 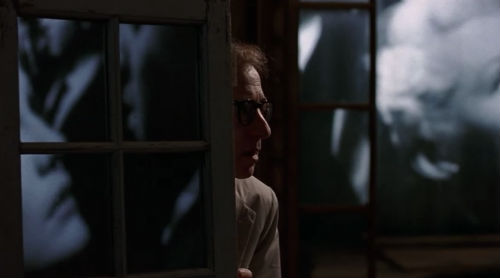 Allen has said that this film was like a vacation. He didn’t aim as high as he could have with it, but it didn’t matter because it was fun. As it happens, Annie Hall originally started out as a murder mystery, an aspect that was later abandoned. With Manhattan Murder Mystery, Allen picked this idea back up, though he originally wrote the female lead with Mia Farrow in mind. During pre-production the two had their much-public breakup and legal troubles and Diane Keaton stepped in to the lead. I love what Keaton did in this film and I think it works better because you can feel the film’s spiritual link too Annie Hall and I think it’s fitting that it has the same actors in the leads. This does feel like just a “fun” film, but Allen is so good at his craft that it is quality as well. Although it was not nominated for any Academy Awards, Diane Keaton received a Golden Globe nomination for Best Actress in a Comedy and Anjelica Huston was nominated for Best Supporting Actress at the BAFTAs. The end of this film is a play on the end of Orson Welles’ The Lady From Shanghai, but instead of a hall of mirrors in an abandoned funhouse, it’s behind a movie screen; a movie screen that is showing The Lady From Shanghai. Brilliant.

This was the second or third Allen film I ever saw (I saw this, The Purple Rose of Cairo and Sleeper all around the same time when I was in middle school).  I laughed and laughed and laughed. Maybe it’s because I grew up doing community theater (I was in my first production when I was six years old), so I was pretty familiar with how ridiculous theater people can be. Dianne Weist is a riot as an aging star desperate for a comeback, John Cusak is charming in the role that would have been Allen’s a few years earlier and Chazz Palminteri steals the show as a gangster’s-hired-hand-turned-playwright. I don’t want to ruin the ending for anyone who hasn’t seen it, but I just want to say I think that it is absolutely perfect. The film was nominated for four Independent Spirit Awards (Weist and Palminteri both won Best Supporting awards), a Golden Globe (Weist won), two Screen Actors Guild Awads (Weist won), along with countless other critic awards. It was also nominated for seven Academy Awards (but not Best Picture!): Best Art Direction, Best Costume Design, Best Supporting Actor Chazz Palminteri, Best Supporting Actress Jennifer Tily, Best Supporting Actress Dianne Weist (won), Best Original Screenplay and Best Director. I was reading yesterday that Weist had asked Allen to be in his next picture, but when he sent her the script she said there was no way she could play that role. It took several phone calls to convince her. In the end she was fabulous and won at least ten awards for the performance, including her second Academy Award (both for Allen films).

This was a television film based on a play that Allen wrote in the sixties; a film version was made in the late-60s and is widely considered a travesty. I really enjoyed this film. It was made with practically no budget and most of the crew worked for almost nothing. But I think you can see how much fun they had making it. The supporting cast is divine – especially Michael J. Fox. It’s not one of his “greatest” films, but it is thoroughly enjoyable.

Mira Sorvino is too good in this film. Linda Ash is one of my favorite characters Allen ever created and Sorvino plays her so perfectly. I haven’t seen this film for a few years, so most of my memory of it is a little hazy, but I will never forget how great Sorvino was in this. And that voice, my god that voice. This film was one of Allen’s greatest financial successes, made on a $14 mil budget, it grossed over $26 mil. Sorvino won the Academy Award for Best Supporting Actress, as well as receiving nine other awards and two other nominations for her performance. Allen also received an Academy Award nomination for Best Original Screenplay, his twelfth in that category.

I saw this for the first time last fall and I just fell in love with it. It’s bright and exuberant and filled with memorable characters. It’s got an amazing ensemble cast: Alan Alda, Woody Allen, Drew Barrymore, Lukas Haas, Goldie Hawn, Gaby Hoffmann, Natasha Lyonne, Edward Norton, Natalie Portman, Julia Roberts, Tim Roth and David Ogden Stiers. The singing sequences are just so much fun and the shots in New York and Paris are as lush as anything Allen has ever done. The film was a financial success (made on a $16 mil budget, grossed $25 mil) and was nominated for Best Musical/Comedy at the Golden Globes.

This is one of my favorite of Allen’s films. Like I said in my last post, it would be helpful to have seen Igmar Bergman’s Smultronstället (Wild Strawberries) before you see this film. The basic premise of the film is very similar to Bergman’s film, though with a distinctive Allen twist. Another really wonderful ensemble, the film is an intriguing look at artistry, what it’s like to be an artist and the effects of an artist on those close to him. This may very well be Allen’s last truly “great” film (though I do love Sweet and Lowdown and Midnight In Paris has been receiving pretty rave reviews so far). Allen received his 13th Best Original Screenplay Academy Award nomination for  this film.

I’m still not 100% sure how I feel about this film. parts of it I really loved and parts of it just don’t work. The black and white cinematography is wonderful and some of the supporting performances are exquisite (Leonardo DiCaprio, Charlize Theron, Bebe Neuwirth, Winona Ryder and Joe Mantegna specifically). Judy Davis is great in the female lead. I don’t really like Kenneth Branagh in the character that should have been played by Allen. Branagh tries too hard to imitate how Allen would have played the role instead of making it his own. It is, however, a pretty scathing look at Hollywood. I think part of why it’s off-putting, though, is it’s a little too mean-spirited. 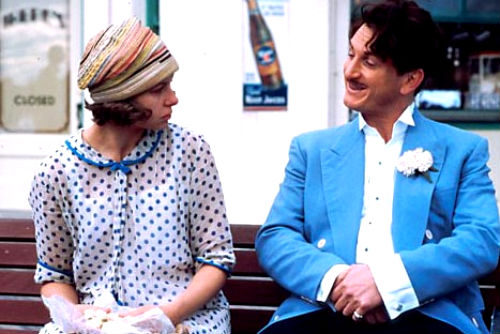 Mostly I love this film for three reasons: Django Reinhardt, Samantha Morton and Sean Penn. With this film Allen again explored the mockumentary genre, this time mixing it with a more straight forward story as well. Penn plays Emmet Ray, a fictional jazz guitarist who was a contemporary of jazz legend Django Reinhardt. Morton plays Hattie, Ray’s wife, who happens to be mute. Apparently Allen told Morton to play the character like Harpo Marx. This delights me as Harpo is my favorite of the Marx Bros. Both Penn and Morton received Academy Award nominations for their performances. Considering Morton doesn’t speak a single line in the entire film, this is quite a feat. 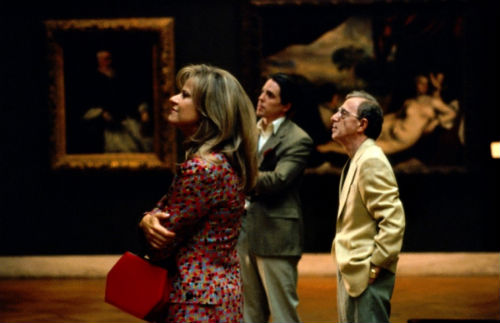 This is another film where it’s not up to par with Allen at his best, but it’s still better than most films in general.  Tracey Ullman in particular gives a standout performance as Frenchy, the wife of bumbling crook Ray (Allen). While Ray botches his latest job, their cover business, a cookie bakery, takes off and makes them over-night millionaires. Comedy legend Elaine May gives a scene-stealing performance as the dim-witted May and won Best Supporting Actress at the National Society of Film Critics Awards. Ullman received a nomination for Best Actress in a Musical/Comedy at the Golden Globe Awards.

Don’t forget to check out our comprehensive Woody Allen aStore here, where you can find all of his films on DVD, as well as books written by and about him.