I thought it would be fitting to start Noirvember with a discussion of John Huston’s iconic adaptation of Dashiell Hammett’s The Maltese Falcon. Although film noir, a term coined in 1946 by French film critic Nino Frank, is often thought of as an post-war era in American cinema (many neo-noir and foreign films would later emulate these original films), this film has been cited as the first true American Film Noir. There’s a great debate about when the era starts and whether it counts as a genre (I don’t believe in genres period, so you can probably guess where I stand on that issue). A lot of the early crime films in the thirties and the silents made during German Expressionism all led to the style and topics seen in the noir films, but for me I think the films made during this era were distinctly full of post-war angst. That said, I’ll admit if The Maltese Falcon isn’t the first true noir, it’s definitely the premiere proto-noir. The film essentially launched Humphrey Bogart as a leading man, following his explosive earlier that year in Raoul Walsh’s High Sierra, in a performance that set the tone for all of noir’s anti-hero heroes to come. The film was nominated for three Academy Awards, though it didn’t win any: Best Adapted Screenplay, Best Supporting Actor Sydney Greenstreet and Best Picture. The other films nominated that year were: Blossoms in the Dust, Citizen Kane, Here Comes Mr. Jordan, Hold Back the Dawn, The Little Foxes, One Foot in Heaven, Sergeant York (co-written by John Huston), Suspicion and winner How Green Was My Valley. 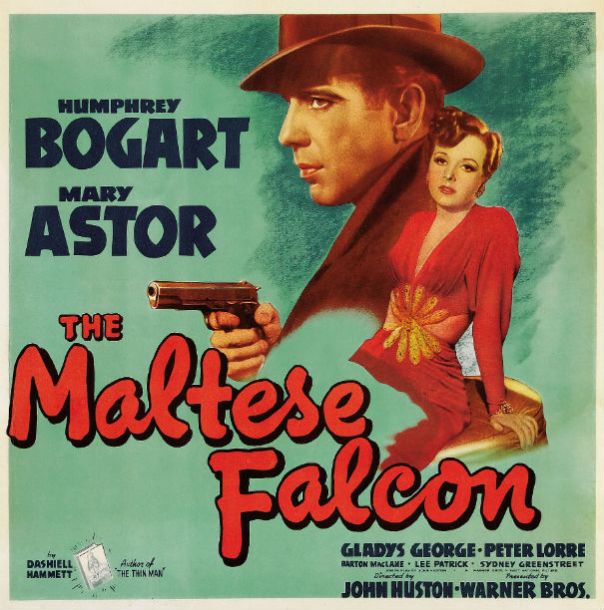 John Huston directed 41 films – The Maltese Falcon being his debut – which resulted in 48 combined Oscar nominations and nine wins. Huston himself received five Best Director nominations winning for The Treasure of the Sierra Madre (though the film lost Best Picture to Olivier’s Hamlet), eight screenwriting nominations, one producing nomination and one Best Supporting Actor for 1963’s The Cardinal. He’s also gave an iconic performance as Noah Cross, arguably the worst father ever to grace the silver screen, in Roman Polanksi’s 1974 neo-noir Chinatown. I also recommend Huston directed noirs: Key Largo (1948) and The Asphalt Jungle (1950).

I have to tell you about the first time I saw this movie. I was sitting in my first apartment in San Francisco on the corner of Geary and Leavenworth. About twenty minutes or so into the film Sam Spade mentions that his late-partner Miles Archer lived on Geary and Leavenworth. YES. THE VERY. SAME. CORNER. I freaked out. This is not too surprising, though, because I lived in the neighborhood that Hammett lived in while he was writing the novel. Now every time I watch the film, I think about my old shitty apartment and wonder if maybe that was the apartment Hammett was picturing. You never know.

Look at this bitchin’ use of shadows. Oh yeah. 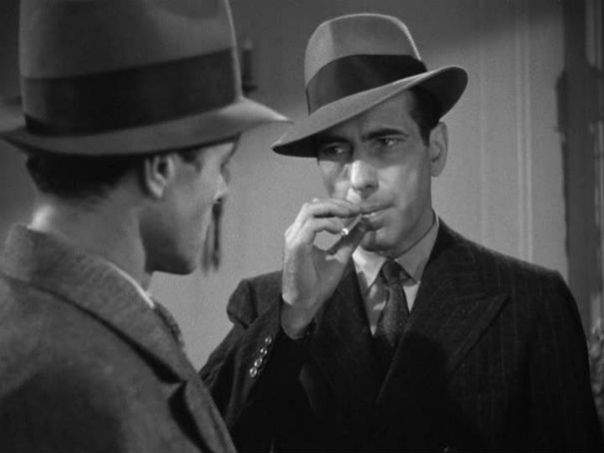 Although Bogart appeared in 75 films over a nearly thirty year career, he was only nominated for three Academy Awards: Casablanca (1943), The African Queen (1951) and The Caine Mutiny (1954). While his was not the first portrayal of Sam Spade on the big screen – Ricardo Cortez played him in the 1931 pre-code adaptation and boy his he sleazy; there’s also a loose adaptation from 1936 called Satan Met A Lady with Warren William in the role – his is the most iconic. It could be argued that Bogart’s Sam Spade and his Rick Blaine are the two characters most closely associated with the actor and for which he is the most remembered. I love how slick he his, while still remaining ever so charming. I haven’t read the book (I know, I know!), so I can’t really say how close his interpretation is to the source material; all I know is I believe Bogart in this role every second the camera is on him. There isn’t a false move to be found in this performance. Since we’re talking noir here, I must also recommend that you watch Nicholas Ray’s In A Lonely Place because it is pure noir perfection.

I think Mary Astor is one of those love her or hate her kind of actresses. I’ve seen it said many times that some people just don’t get her appeal. I’ve never felt that. I think this film was my first introduction to Astor and since then I’ve seen several of her films – including her Oscar-winning turn in The Great Lie, which also came out in 1941 – and I think she brings something kind of unique to the big screen. She is frail-looking and could easily play the sweetheart or the “virgin” character, but brimming just underneath is a strength and sensuality that she only let’s show briefly and always at just the right moment.

Peter Lorre first made a splash in German cinema as a serial killer who preys on little children in Fritz Lang’s 1931 masterpiece M. Lorre fled Germany during the rise of the Nazis and appeared in Hitchcock’s The Man Who Knew Too Much in 1934 and Secret Agent in 1936. Eventually he wound up in Hollywood, where he signed with Warner Bros. and worked as a featured player in thrillers and adventure pictures. His performances in Casablanca and as elusive Joel Cairo in The Maltese Falcon are perhaps his most remembered of his roles with Warner Bros. If you watch The Celluloid Closet, there is a great discussion about Lorre in this film and how in the novel the character was clearly homosexual (he was based on an actual criminal arrested by Hammett in Pasco, Washington, in 1920 when he worked as a Pinkerton operative), but due to the Hays code, this could only be hinted at in the film. Probably my favorite way in which they hinted at this is the way Cairo handles his cane in his meeting with Spade. Watch that scene again and look for that; you’ll never see the character the same way again. 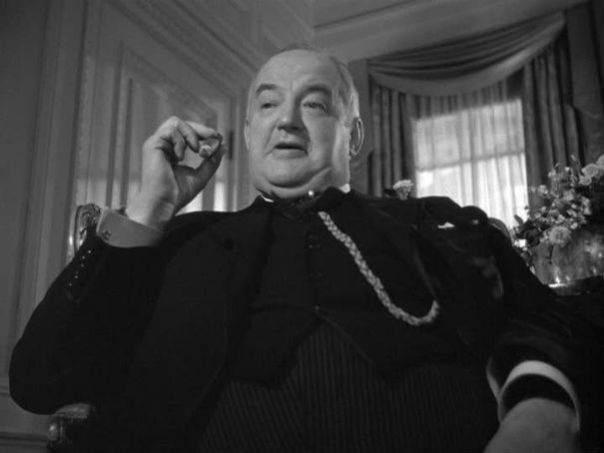 Greenstreet was active in theatre for nearly forty years before making his screen debut in this film at the age of 62. He received an Oscar nomination for his chilling performance as Kasper Gutman aka The Fat Man, though he lost the award to Donald Crisp in How Green Was My Valley. Greenstreet’s performance in this film is one so perfectly calculated and controlled that it seems effortless. It is this reserve that makes the villain so chilling and so memorable. Greenstreet and Lorre made nine films together, including the great little noir gem Three Strangers, which is available on DVD from the Warner Archive.

A favorite of film noir fans and featured in many a film from the era, Elisha Cook, Jr. is perhaps best remembered as Wilmer, Gutman’s henchman who tries, unsuccessfully, to intimidate Bogart’s Spade. You could do a pretty great marathon of noir just by watching Cook’s films, including 1941’s I Wake Up Screaming, 1944’s Phantom Lady, 1946’s The Big Sleep, 1949’s The Great Gatsby and 1956’s The Killing.

Detective Tom Polhaus: Heavy. What is it?
Sam Spade: The, uh, stuff that dreams are made of.

I wouldn’t be right not to post a shot of this iconic exchange towards the end of film. It truly is the stuff that dreams are made of.  I hope y’all enjoy the rest of your Noirvember!