This month I watched quite a bit more films (I curbed my rewatch of The X-Files, but it’s still happening. Trust.) But before we get into the log, here’s a recap of all the writing I did this month. For The Classic Film Collective I recommended a great silent film and wrote a poem about Merle Oberon. On my podcast Prog Save America I had director Allan Arkush (Rock and Roll High School, Get Crazy) on to talk about being a teen Bob Dylan fan in the 60s and working at the Fillmore East, and I had Amanda from the podcast Discord & Rhyme talk about The Moody Blues. Speaking of podcasts, I joined Ryan from the Matineecast to talk about Zola. For Nerdist I wrote about crazy credits, the classic films that may have inspired Captain America: The First Avenger, and Arthurian adaptations you may have forgotten about. For Moviefone, I wrote about Zola & American Honey, films that inspired The Last Letter From Your Lover, and interviewed Shahad Ameen about her film Scales, Leigh Janiak about the Fear Street Trilogy, Augustine Frizzell about The Last Letter From Your Lover, and Sonia Kennebeck about Enemies of the State. For The Playlist I reviewed This Way Up season 2, The Last Letter From Your Lover, and The Pursuit of Love. For RogerEbert.com I wrote about how the doc about Anthony Bourdain is a disaster. Lastly, one of the pieces I am the most proud of yet, for Musings I wrote about how Ethan Hawke has infused autobiography into his body of work.

As always, after the cut you can find everything I watched in July as well as some of the highlights of my month in film.

END_OF_DOCUMENT_TOKEN_TO_BE_REPLACED

The final month of the final year of the decade. How did we get here??? Time is an illusion, but the enjoyment you get from movies is real. Dig it! With that, here is everything I watched in this month.

END_OF_DOCUMENT_TOKEN_TO_BE_REPLACED

I really didn’t watch very many films in February. Mostly being soooo tired because of the bad weather, traveling a lot, and the fact that most movie theaters in February were still full of 2018 holdovers that I’d either already seen or didn’t want to see. That said, I did have some favorites that I watched and as always you can see those after the cut.

END_OF_DOCUMENT_TOKEN_TO_BE_REPLACED

Movie Quote of the Day – Before Midnight, 2013 (dir. Richard Linklater) 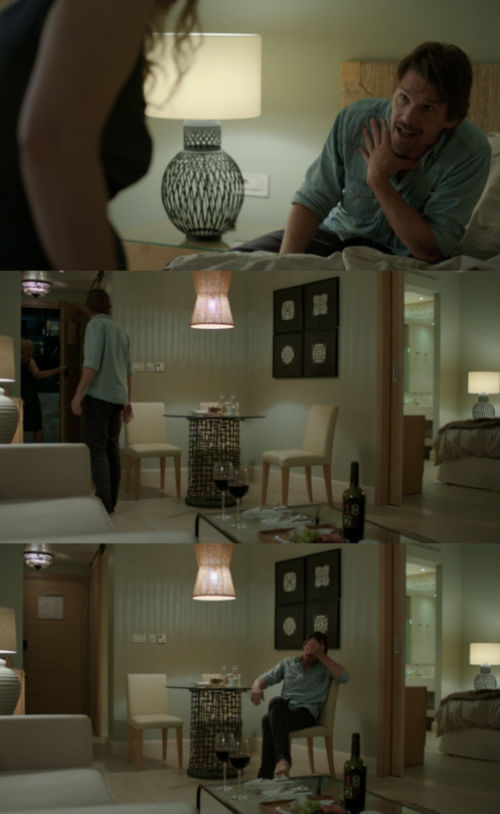 Jesse: I’m okay with you being a complicated human being! I don’t wanna live a boring life where two people own each other, where two people are institutionalized in a box that others created – because that is a bunch of stifling bullshit!

I’m trying to remember the first time I saw this film and I have a vague recollection of seeing it on TBS when I was in middle school. I do know that when I was a freshman or sophomore in high school one of my teachers showed it and we had an in-depth discussion of the film’s themes (well, as in-depth as you can in a podunk small town high school class filled with asshole 14 years old – I include myself in that description). A lot of what I’ll write about here is based on that discussion of the film, actually. I guess it was sophomore year because I think it was the class where the teacher who normally taught geography/history had to take over our English class, so mostly instead of reading books we watched films and discussed them. It was kind of a wonderful class if memory serves. At least, for me it was, because, well, movies. Dead Poets Society was nominated for four Academy Awards, winning one: Best Original Screenplay (won), Best Actor Robin Williams, Best Director and Best Picture. The other films nominated for Best Picture that year were Born on the Fourth of July, Field of Dreams, My Left Foot and winner Driving Miss Daisy.

END_OF_DOCUMENT_TOKEN_TO_BE_REPLACED

Vincent: I don’t know how to thank you.
Jerome: No, No. I got the better end of the deal. I only lent you my body. You lent me your dream.

Movie Quote of the Day – Before Sunrise, 1995 (dir. Richard Linklater) 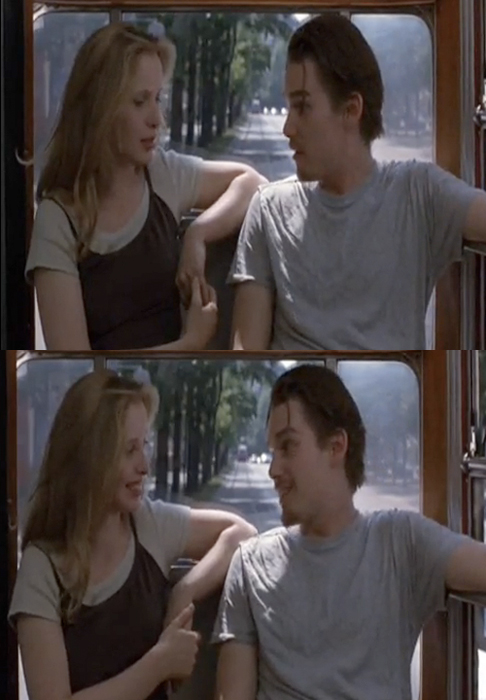 Jesse: Um, do you believe in reincarnation?
Céline: Yeah, yeah, it’s interesting.
Jesse: Most people, you know, a lot of people talk about the past lives, and things like that, you know, and even if they don’t believe in it in some specific way, you know, people have some kind of notion of an eternal soul, right?
Céline: Yeah.
Jesse: Okay. Well, this is my thought. Fifty thousand years ago, there are not even a million people on the planet. Ten thousand years ago, there’s like two million people on the planet. Now, there’s between five and six billion people on the planet, right? Now, if we all have our own, like, individual, unique soul, right, where do they all come from? Are modern souls only a fraction of the original souls?. Because if they are, that represents a five thousand-to-one split of each soul in just the last fifty thousand years, which is like a blip in the earth’s time. You know, so, at best, we’re like these tiny fractions of people, you know, walking… I mean, is that why we’re all so scattered? You know, is that why we’re all so specialized?
Céline: Wait a minute, I’m not sure I…I don’t….
Jesse: Hang on, I know, I know, its a totally scattered thought, which is kind of why it makes sense.

Troy: You see, Lainie, this is all we need. . .couple of smokes, a cup of coffee. . .and a little bit of conversation. You and me and five bucks.

Here’s the story from AP:

Troubled video-rental chain Blockbuster Inc. could file for bankruptcy protection as early as Wednesday, according to a Wall Street Journal article.

Citing unnamed sources, the Journal said Blockbuster is working with creditors to develop a bankruptcy restructuring plan that would free it of debt and allow the company to keep some stores open and focus more on digital distribution.

If Blockbuster misses an interest payment on Sept. 30, more than $900 million in debt will be due in full.

The article says billionaire investor Carl Icahn owns one-third of Blockbuster’s debt and would return to the company’s board once it exits Chapter 11. He resigned from the board in January.

Blockbuster and Icahn did not return calls for comment.

Once a home entertainment powerhouse, Blockbuster, based in Dallas, has been losing market share for years as more consumers switch to video subscription services like Netflix Inc., video on demand services and curbside rentals such as Redbox.

Blockbuster peaked at about 9,100 stores in 2004, but it has since shut many to cut costs and is down to about 5,800 as of August. In the same period, Netflix membership has grown from 2.6 million to about 15 million.

I grew up in the middle of nowhere, so to be honest I don’t know that I’ve ever even been in a Blockbuster. I also am a huge fan of Netflix. Still, it’s sad to see the end of an era.