END_OF_DOCUMENT_TOKEN_TO_BE_REPLACED

June was a pretty great month in cinematic shenanigans for me, even if it was light on feature films (more on that after the cut). Halfway through the month I joined the Battleship Pretension podcast for their retrospective episode on the late Agnès Varda. I also saw a lot of really artistically challenging films (and binged a ton of soapy TV!). As always, you can see everything I watched and read a little bit about my favorites after the cut.

END_OF_DOCUMENT_TOKEN_TO_BE_REPLACED

January started out pretty good for my cinematic resolutions. I watched a handful of silent films each week and it really did make me happier! I also sought out a few films directed by women that I kept missing (and they were worth the wait!) and saw probably the best film of 2018 so the rest of the year can just take a big break. As always, you can see all the films I watched last month after the cut as well as a few favorites.

END_OF_DOCUMENT_TOKEN_TO_BE_REPLACED

Lancaster Dodd: There’s nothing I can do for you, if your mind has been made up. You seem to know the answers to your questions, why do you ask?
John More: I’m sorry you’re unwilling to defend your beliefs in any kind of rational. . .
Lancaster Dodd: If, if you, if you, if you already know the answers to your questions, then why ask PIG FUCK? We are not helpless. And we are on a journey that risks the dark. If you don’t mind, a good night to you.

Barry: Hi Lena. I’m so sorry. I’m so sorry I left you at the hospital. I called a phone sex line. . .I called a phone sex line before I met you. And four blond brothers came after me. And they hurt you and I’m sorry. And then I had to leave again because I wanted to make sure you never got hurt again. And. . .and I have a lot of pudding. . .and 6 to 8 weeks it can be redeemed. So, if you could just give me that much time, I think I can get enough mileage to go with you wherever you have to go, if you have to travel for your work because I don’t ever want to be anywhere without you. So. . .could you just let me redeem the mileage?

Sidney: You know, the first thing they should have taught you at hooker school: you get the money up front.
Clementine: Fuck you!

I worked a lot of hours in August and I also spent a weekend in L.A. (doing non-movie watching things if you can imagine!), so my new-to-me count for August is pretty low. I mean, for me anyways. I did, however, manage to finish Paul Thomas Anderson’s filmography. If you’ve been paying attention for the last few months, you’ll’ve noticed that Kristen of SalesOnFilm and I had been watching a Paul Thomas Anderson film a month, working our way through his filmography. August’s movie was supposed to be Hard Eight (which we did watch, and I highly recommend), but then a sneak preview popped up at the Castro Theatre for The Master in 70mm, therefore there were two PTA films. I’ll elaborate more on that after the cut. Speaking of films on the big screen, while I was in L.A. I finally got to go to the Aero Theatre (still haven’t made it to the New Bev!) where I saw two Sam Fuller films (including Shock Corridor, which is even better on the big screen!). Last night I saw Vertigo in 70mm at the Castro. I hadn’t seen that film in a good ten years. Recently it usurped Citizen Kane on Sight & Sounds once-a-decade poll of the greatest films of all time. I gotta say, as great as Vertigo is, I gotta call bullshit on that. Lastly, I’ve been watching may way through all of Roscoe “Fatty” Arbuckle’s films that are available on DVD. I’ve still got quite a few left to watch. Boy do I love him. Oh, also when I was in L.A., I got to visit the boys at the Warner Archive. They even let me peak into the coveted DVD closet. I nearly passed out. I’m pretty sure that’s what Heaven looks like. Lastly, in case you missed it, I started writing Oscar Vault Monday again! It’s good to be back. As always, all my new-to-me films for the month are listed after the cut.

END_OF_DOCUMENT_TOKEN_TO_BE_REPLACED 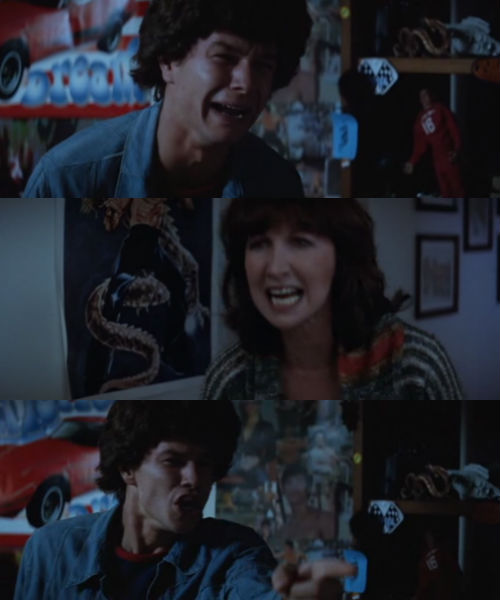 Phil Parma: I know this sounds silly and I know that I might sound ridiculous. Like this is the scene in the movie where the guy’s trying to get ahold of the long lost son, you know, but this is that scene. This is that scene. And I think that they have those scenes in movies because they’re true, you know, because they really happen. And you gotta believe me. This is really happening. I mean, I can give you my number and you can go check with whoever you have to go check with and call me back, but  do not leave me hanging on this. Alright? Please? See, this is the scene in the movie where you help me out.

Movie Quote of the Day – There Will Be Blood, 2007 (dir. Paul Thomas Anderson)